The Idea from Space 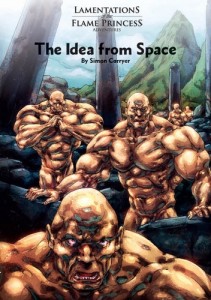 Xaxus is a creature of pure thought. Manakata is a being of raw power. On an island at the edge of the world, they transform human proxies to act on their behalf. And they war Now it’s you on this island, caught in this battle. Will you remain who you are? Can you?

This is a little sandbox/module in the best/old sense of the word. It describes an environment on an island, and then offers some opportunities to get the party on to the island. It’s not a one-trick pony; it’s more like an eight-trick pony … but one of those tricks is very VERY good. Or appealing. Or something.

What is presented is an island. On the island are two great towers, linked up high by a rope bridge. There’s a number of other minor locations, but those are the centerpieces. The island has a god, in the form of a stone idol. He gifts his followers increased strength and con, at when they fail him their INT and WIS is lowered. They end up looking like some roid-rage blob. Recently a thing from space has crashed. It’s name is Xaxus. It’s an idea. Nothing more, just an idea. He’s a nice guy. And very convincing. Like, 25 CHR convincing. Nothing magical, nothing coerced, just really convincing and likeable. When you freely join him you become a part of a hive mind. But you do it of your own free will, and you can leave again at any time, or your own will. Finally, there was recently a shipwreck, which most likely brings the party to the island in order to find the survivors. With all of this in mind, go read the intro blurb again. Make more sense now? This thing has potential energy written all over the cover in giant red crayon.

This thing has quite a few neat things going on in it, but by far the most interesting is the concept of the Idea of Space, proper. It smacks a bit of Stranger in a Strange Land territory. The groupthink hive mind trope is not too uncommon, but the voluntary nature of this one is what makes it stand out. This, and to a lesser extent the Manakata Bro culture, are both voluntary. This plays on one of my favorite game concepts: temptation. I wonder what happens when the big red button is pushed? Yes, the friendly ogre with jeweled crown has his back turned to you. Hand and Eye of Vecna, sitting right there … This is choice. It’s real choice. No tricks. Both choices are valid. Both choices are both wonderful AND leave you wondering about the road not taken. There’s gotta be some german compound word for this sort of thing. Anyway, it’s an appeal to the PLAYERS rather than the characters. Those tend to be the more effective techniques, and I think it’s really effective here.

Beyond this it’s got a lot of other nice and interesting bits in it. The Xaxus folks can shoot a beam ray when they team up and hold hands. Great Scott! That’s AWESOME! Hive mind cultists joining hands in praise to the larger entity and shooting eyebeams as a result … wonderful! Treasure is on the lighter side and runs a bit into “creative looting”, such as “how much can we get for the glass statue” or “how much for the weird ropes holding up the bridge.” There’s a decent amount of other treasure, generally decently described. On the magic side there’s a ring that stands out. It’s one of those “magic doesn’t impact you” rings … either good or bad magic. And you can’t take it off. And you find it on a severed finger, burnt, in a fireplace. Nice touch. There are not a great many new monsters, but what there is are both described well and illustrated well. I like a good monster description, one that is more evocative than fact based, and the big monster description in this fills that well. The Bro’s are also described nicely.

Touching again on the Temptation theme: both groups on the island are, generally, friendly, or at least neutral. This sets things up well. You get to learn about their problems. You get to learn how they view The Others. You get introduced to the power that will tempt the players. Eventually, the players probably hatch a zany plan and things will end up in some kind of running hackfest, as they always tend to do when players are involved. This module sets that up perfectly.

There are a ton of other neato things in this as well, mostly in the two towers. They range from freaky skeletons (mysteries for the DM to expand upon) to freaky deaky plants, to room puzzles that feel integrated into the complex rather than “puzzle in a room.”

You can pick it up at DriveThru.

3 Responses to The Idea from Space