Against the Cult of the Bat God 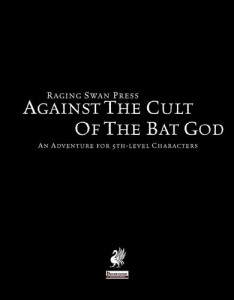 The Lonely Coast’s most remote village, Oakhurst broods under the dark boughs of the Tangled Woods. Rumours of incest, murder and vile rites during the black of night surround its insular citizens. It is a place most wise people avoid as the very air seems inhospitable to strangers. Yet in the rumours is a grain of truth, for something dark does indeed stir in the shadow haunted trees and hunched homes of Oakhurst. An ancient evil, hungry with the thirst for blood, awakens from its eons long sleep. As disappearances mount and the Lonely Coast can no longer turn a blind eye to the blight that is Oakhurst, heroes are called upon to investigate the foul rumours and mysteries that plague the village. As the search for the truth intensifies, they may find themselves the next victims of a rising, bloodthirsty evil. Can they survive Against the Cult of the Bat God?

Pathfinder?!?! Yes, Pathfinder. Don’t be an ass. Every version of D&D is essentially the same. If you can’t run a Pathfinder adventure OSR, or an OSR in Pathfinder, then, well, I’m sorry to have to say this to you: you’re an idiot. This probably goes for Warhammer, The One Ring, MERP, Harn, and every other traditional fantasy RPG. They are all close enough to run. Let’s get the Pathfinder crap out of the way up front. It’s got some magical ren faire shit, like some magic stuff for sale. It’s also got stat blocks for monsters that are a column large, per monster. It’s also got some hideous room/key style that insists on putting break stats next to everything possible, and describing every window, door, and ceiling height, for every room, on a separate line. Pathfinder sells, I get it. But man, the number of trees that died … Do the Pathfinder gamers really not buy stuff if it’s not in this excessively verbose format?

I don’t know where I heard of Raging Swan. I sometimes look at “What’s the best adventure …?” threads on various forums, so I suspect it came up in that. For whatever reason, I’ve got a review box full of the stuff, mixed in with free adventures, con promos and whatever. So you’re gonna get a couple of Raging Swan reviews. Because some idiot somewhere on the internets said they were good. I don’t know what I trusted that idiot over the ones that said some other stuff was good, but I did. So here we are.

This is a good adventure. The better parts of it remind me of Deep Carbon Observatory. DCO presented little scenes, vignettes, inspiration that the DM could then leverage for party fun time. The better parts of this adventure, specifically the village part, remind me a bit of that style. There’s also a little bit of the Steve Jobs “just one more thing …” going on also. One of the hooks has a nobleman approaching the party. His daughter ran away with her fiance to the adventure village and took she absconded with the family jewels … no doubt to pawn. Could you go fetch her back? That’s a pretty standard hook. Just one more thing … you get the feeling he’s more interested in getting his jewels back than his daughter. BLAMO! Just what you need to add a WHOLE lot of life to this interaction with the party. No longer a faceless droid, the nobleman now has something for the DM to work with. There’s a lot of this “little big extra” going on in this adventure. The second hook, by the way, is missing this. The local lord’s steward contacts the party, asking them to look into the village for the lord. What’s missing is that little bit extra: “because he doesn’t trust the reeve he appointed. Don’t contact him.” That turns boring into a spy mission, with additional distrust to play with. Not everything in the adventure is good, as that example shows, but it is at least generally decent, with no railroads.

The adventure centers around a remote forest village. Decrepit and decaying, straight out a Lovecraft story. There are half a dozen notable villagers detailed. There are a handful of events detailed. There is a full percentile table full of “village backdrop” to add character to the village. There’s a handful of businesses presented. There’s a timeline presented for what happens. It’s just about perfect as the centerpoint for a village investigation locale. Try this on for size: Cats hiss at one another, fighting over a piece of rotten meat before howling and running off. A decrepit old man swoops in to grab it and begins to stuff it into his mouth. This is exactly the sort of stuff to bring a place to life. It sets the atmosphere, for both the DM and player, perfectly.

The party is hooked into the remote village. They poke around a bit and eventually get attacked that first evening. Which leads to an investigation of an old manor, which leads to another ambush, and then to a ritual in a dark cave the next day. Poke around, shit happens, do some B&E to get some more information, suffer some consequences, confront the baddie. Pretty standard. And very well executed. Werebats, the creepy village, the creepy manor (“a small sack filled with hundreds of human teeth spills over”), this is a classic example of a well-executed “showing instead of telling” adventure. Telling the party Bob is evil is a “meh” situation. The party discovering a bag of bloody humanoid teeth shows the party that Bob is evil … a much more successful way of making an impact during the adventure. This adventure does that very well. I fucking LOVE the tables in this adventure that are used to add some of that showing. The adventure proper does a decent job and it’s taken over the top by those tables.

I already touched on the verbosity a bit, but let me give another example. It illustrates perfectly the agony/ecstasy of the area descriptions in this adventure. Area M2 is the Animal Pens. “The Wearnes kept an assortment of chickens and rabbits to drink their blood.” Then there’s a little two-sence read-aloud that has a nice little bit about flies buzzing angrily around the pens. Then there’s a little bit about the family neglected the animals kept in here and they starved to death, the stench of rotting bodies hanging in the air. PERFECT. EXCELLENT! Mood set! DM Energized! Then the animal coop is described on a separate line, adding nothing of import. Then the fence is described (along with the require fucking break DC), adding nothing. Then the pen yard is described, adding nothing. All of that is at least as long as the first, good part, and maybe ever a bit longer. Going through the required (Pathfinder?) forms detracts insteads of adds.

Some of the treasure is very nice. A +1 dagger that is shaped like a scalpel with a metal handle. Some kick ass books, which double as spellbooks. Exactly what spellbooks should be. A short collection of profane poems to evil gods acts as a scroll of augury. Cool! The Necrotic Codex of Evern Holstam is bound in tanned human skin with a spine fashioned by a leg bone. It’s a treatise on the undead, and contains all L1 and L2 necrotic spells. Sweet! This is treasure! The party will shit themselves AND covet them! Awesome!

The monsters here are almost all new. While original, and well illustrated, they could use a little bit more descriptive text to communicate the flavor to the DM. But, bonus points for non-book monsters. Or at least using monsters that I don’t recognize.

There’s a miss or two also. There’s a journal present that describes the evil plan. Journals, a staple of Lovecraft and CoC, are a cop out. Find a different way to communicate things. Prisoners or something. The village feels smaller, described, than what’s portrayed on the text. The random village trappings help with this a bit, but it’s still feels a bit … empty and unsupported? I don’t know … I might be wrong about this. The trappings table is VERY strong. The main baddie, a werebat, also uses a Wand of Wounding type thing. That’s fucking lame. Make the werebat do werebat things. A werebat using a wand smacks of DM fiat. let him shoot green rays from his glowing green eyes if you want him to have a ranged attack. But using a monster using a wand is lame. The werebats have already been tweaked. They worship a dark bat god. Why not leverage that instead of jerking us out of the werebat mindset?

This is solid. It’s organization is not perfect, but it does a decent job of laying things out for you so it’s to run during actual play. The tables and information is easy to find, even if they are not reproduced in the back or on a tear sheet.

The PDF is $9 on rpgnow, with the print being $14. If you have any interest in what I’ve described then I would encourage you to look into this. I’ve bought adventures for a lot more that were a lot less good.