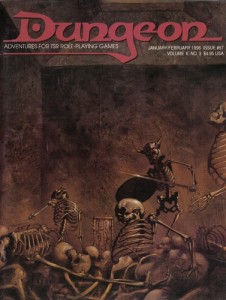 This is one of those hyper-realistic environments and features an assault on an evil temple. You know the type this is: “the guards never look at the torchlit courtyard so they don’t destroy their nightvision” sort of thing. There’s good and bad in this. On the one hand there is plenty of advice on how the temple dwellers react. On the other you have to sit through yards of nonsense like “there’s a plumbing system that takes waste to the swamp” and other trivia. There has the potential for some large battles; groups of 48 lizard men or 16 giant spiders attack in the swamps on the way to the temple. There’s way too much read-aloud in the beginning, the “realistic” environment causes the room descriptions to be overly long and the traps overly elaborate. There are some nice magic items with nice effects. This needs a pruning but could be a nice addition to a mass-battle kind of campaign. Vikings, or nortlanders, or … man I really liked Vakhund. A Vakhund campaign addition. Man, that adventure was so borderline.

Uh … two thouls attack on a road. This is a side-trek? What’s next, a kobold you fight in a dungeon corridor? As an aside, “Brigands” are mentioned in the read-aloud. You should never say “Brigands” or “Bandits” in a game. It should always be “Jacks’s Gang” or “that mob of Bandy’s boys.” Specificity brings a world alive and genericism kills immersion.

While escorting a caravan you’re distracted and it’s ambushed. The party assaults a fortress to recover the jewel it carries. A very railroady beginning and a very railroady ending. The entire beginning can be thought of as the hook, as you’re railroaded all over the place so the caravan can be alone to get ambushed. The ending has an evil spirit, you’ve carried with you, fighting the big bad. The middle has a couple of highlights (tower of fire, tower of water) mixed in a lot of drudgery about sweet smelling privies. There’s some nice NPC descriptions in an ambush (a fat elf woman who uses small sharp knives, two twin brothers using javelins, etc) that calls to mind cheesy witty banter from GI Joe cartoons. That’s a nice little way to bring some additional color to an otherwise mundane ambush. The wondrous imagery of magical arabia isn’t strong enough to save this one.

The Murder of Maury Miller
by Cameron Widen
Level 1

I have some vague recollection of this one. There’s an arsonist in a small village that turns out to be a scarecrow. But it’s a good scarecrow, trying to draw attention to his murder. In life he was the miller, murdered by a corrupt tax collector. When presented evidence the king send you to apprehend the corrupt official. Way way WAY too much text here for such a short adventure. Let’s play a little game I call: Danger Wil Robinson! “Neutral characters will have trouble finding motivation to complete the adventure.” In lazy adventure writer speak this means “I couldn’t be bothered to think of any way to motivate the party.” Here’s another one: “There is nothing of interest or value to the PC’s here.” This means the reader has just ingested two paragraphs of text that has no bearing on the adventure.