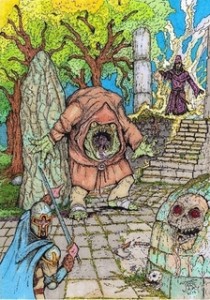 Several leagues off the main road is a portal to the realm of fairy; a ring of standing stones resting in a clearing surrounded by ancient trees. Once a year, from the full moon to the next full moon, this portal opens and allows the fairies to cross over, to wreck havoc and cause mischief in the mortal realm.

This is a very basic and bare-bones adventure with four locations. It’s a fetch-quest to get some items a few fairies have stolen from an inn. While staying at an inn some fairies sneak in and steal things. The next morning you’re offered a reward to get them back. The fairies left a trail that splits off into three directions. Each direction has a location to have an encounter in: a one room cave, a well in a clearing, and some standing stones in a clearing. There’s really not much to this at all. But …

It’s also an excellent example of a fine adventure design (if short …) for running at the table. There are about nine or so NPC’s at the inn with the characters. The designer summarizes them all in one table. What they do, who they are, a couple of words for personality, and so on. Every adventure should do something similar. Not necessarily a table, but some way to present them all to the DM in a manner in which they can EASILY refer to them and recall who/what they are. Help the DM. Cue them. It’s what the adventure is supposed to do … and it’s done here.

Another example of this design is the time-table. The monsters have plans of their own and is the party linger then the adventure changes as they summon their reinforcements and, eventually, the massacre that is to come. This is briefly presented in tabular format as well. While this sort of thing is not always appropriate to an adventure, for one with a plot it IS almost always appropriate. The result is that you get a places with some activities going on that the party can interact with, rather than a railroad in which The Party Interrupts At The Critical Moment Yet Again.

I hesitated a lot in writing the rest of the review, below. It seems unfair to take this out on Simon’s adventure. His adventure DID cause me to think about these ideas, and I think it’s a very good example of what I’m going to talk about, but I don’t mean to pillory him. Let us instead view these comments as a more academic examination.

The adventure is presented in a … boring? manner, and, I’m going to assert, could have solved this with two minor change. As one reads this brief adventure the monsters are referred to as fairies, or Fir Darrig. This is the only description of them until the very end, in the New Monsters section. Once you get through the entire adventure and get to the end you come upon the description … and they are wonderful! Suddenly the boring generic “fairies” come to life as little child-like rat-men in frock coats and flat hats, with dandily dressed leaders. If I’d know this, prior to reading the adventure, I may have had a MUCH different view of the encounters. As presented they come off a bit, oh, I don’t know. “Generic” isn’t fair. Lacking in color? Indistinct in the mind? I think it’s this last one. I recall the encounters easily enough, but it’s indistinct in my head. Having had the descriptions beforehand I truly believe I would now be making up little stories in my head as I read the adventure, with the little pompous ass rat-men in their coats and hats screwing with the party. I might also point to the map in this regard. It’s a great map. Line draw and and looking like a “real” map, it’s actually an abstracted map. I really like it a lot. Again, I think having seen the map before the adventure would have … set the mood? better.

Maybe that’s the problem I’m having. Without setting the mood properly, with the DM, the adventure starts in a mundane manner: thefts at the inn. Rather than “fey adventure!” instead what comes to mind is “boring and generic inn hook.” By shifting the map to the beginning and maybe including a one line description of the fairies/creatures in the text, rather than at the end in the appendix, it would set the mood better and cement the style. I think this would have done a much better job of planting the seeds of good ideas in a DMs head. Really, that’s one of the key things I’m looking for. When I read the adventure does my mind race to fill in the details? Just those minor tweaks would have, I think, turned this around for me.

I see Simon is also doing a book of lairs. This adventure got me thinking about that. This adventure is a little shorter than I prefer, probably coming in at one session of gaming. But, if I were running a hex-crawl and came across an inn and wanted to fill in some details … I think a book of one and two page “adventures” organized to support a hex-crawl would be wonderful and this would fit in well to that. Similar to those Dungeon Magazine Side-Treks, but not sucking like they do. 20 “Inn” adventures. 20 ”villager” adventure, and so on. “I need an inn.” BAM! There it is.

[ARG! I bought the boring brown cover. I wish I had bought the full cover one I put in the review!]