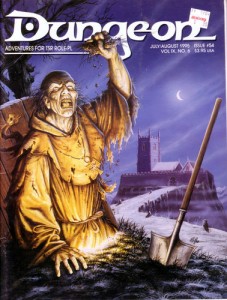 “Name of the Rose” light.This is a railroad murder mystery in a monastery. Monks are turning up dead and the party is asked to help. The linear nature of the adventure (there is virtually no ability to impact the outcomes) is lame, and it could use MUCH better organization, but it also gets several things right. The motivations of the various monks are very human. They act out of spite, humiliation, and so on. That aspect is very well done. It also has some hooks which are open-ended enough to be interesting. Horse losing a shoe, inn’s full, wrong turns, etc. Finally, the adventure correctly recognizes that this is a social adventure and therefore the map, and keyed encounters, are not as important as they are in exploration adventures. It’s far too wordy, the NPC’s need shorter and more organized explanations, and portions are a complete railroad. It uses wordy boxed text to convey information to the party instead of noting facts to the DM for their use. All of this makes it cumbersome to use in practice. Also: when you mention a grave outside the monastery in the opening read-aloud you are guaranteed that the party will focus on it immediately. Perhaps not so wise to emphasize it so much? This would be another nice adventure to “fix,” if one had time and inclination.

A dog gets helps for his trapped master. That leads to a simple encounter with a bugbear and some hell hounds under a trapped rock outcropping. Why so much emphasis was given the Lassie portion is a mystery to me.

A misdirection adventure in which the party fights raptors instead of demons … and then some demons show up at the end. Lame hook “Brave adventurers needed to combat demon outbreak in our town!”, a HUGE read-aloud monologue with the town council, NPC’s giving the party powerful magic items, and a confused hex section with only 2 encounters in it. It also has brief and good instructions for the monsters (they run out one door and behind the party) and some nice multi-level environments and map features to fight in/around. The room descriptions are very … free text, which makes it QUITE hard to tell how many monsters there are in a room. I know some people don’t like bolding, but just buriying the information in the text may be the worst possible way. There are some demons that show up in the end, to get revenge on the raptors, but they betray the party. LAME! LAME LAME LAME LAME LAME! It would be SO much better if they actually joined forces and the party had some potential demon buddies. Think of all the fun THAT would bring in a campaign! Nice misdirection in this one, with moron sages thinking the raptor footprints are Vrock. There’s a couple of gotcha moments also. AT one point there’s a loud noise if there’s a dwarf in the party, from an old dwarf temple. Out of nowhere this happens. Compare this to the armor/bucket on the well in Moria/Fellowship of the Ring. In one you have a chance to avoid and hilarity ensues. The other is just random punishment.

Misunderstandings abound! The party runs across some forest fey upset about a witch nearby that stole one of their fiddles, and now they can’t jam. The party finds her in a nearby cave trying to play the fiddle. And then some hook horrors attack from the rear of the cave. Turns out she’s an escaped slave and not a witch. There’s really not much to this one at all. Some fanciful read-aloud from the fey about the witch’s descriptions and a 1 room cave with a couple of traps.

This is a little two part adventure that’s got some nice things going on in it. Villagers are being killed, a ruined keep is nearby, and …. well .. This thing has one major problem: The two parts of the adventure are not tied together very well. A redcap is killing people because he thinks his hat was stolen.. at the keep. And the redcap is mute. And invisible. The only tie to the keep is the mayor telling the party that strange things were going on at the ruined keep right before the killings. Since the redcap is invisible and mute there’s no real way to know that you should go to the keep. There are messages in blood about finding the hat, so if you you DO find the hat in the keep then it should be obvious that it needs to be brought back. The redcap is given the perfect array of magic items to avoid the party, the room descriptions are too long for a social/investigation adventure, and the rumor table is fact based rather than the more colorful ‘yokol-based’ tables that I prefer. In spite of all of this, I like the adventure. The NPC descriptions are generally quite good, and short. “Skaldar is a large friendly man with a serious mind for business. His shorter but heftier brother, Vaxalt, has little patience for customers who dicker over price.” Those are good descriptions for a DM. Short, and they give you what you need to know to run them. The wise-woman is an asshole. The normal rats, under the control of were-rats, still talk to the party and will sell out the rat-men for a bite to eat. Nice characters in this one, and good characters are a cornerstone for ALL social/own adventures and a lot of dungeon encounters. There are a few other nice things in this one: jack-o-lanterns in windows give an air of a “cursed village”, and the mayor rushing out to frantically grab the characters when they show up is a nice touch. FInally, the village cats are hunting the redcap, which is a nice touch AND could potentially lead to the wise-woman, who DOES have information to impart. This is another one of those adventures that desperately needs a rewrite to save it. Nice art in this one also, and I don’t usually mention art.

Oh Jesus H Fucking Christ, seriously? What’s next, Waiting for Godot – The Al-Quadim Adventure? Yes, it’s fucking Macbeth. With grey & drow elves with names like Thane Macduff and Malcolm. And yes, there are are acts & scenes, just like in the play. Drow Macbeth Werewolves make an appearance. I guess also making them vampire liches would be too much? I read just over half of this crap-fest before giving up. Rather than play D&D let’s just roll a d6, on a 1-5 you win. On a 6 you roll again! Yeah Us! We played D&D! This is nothing but scenery moving past the characters. No better than the worst of the World of Darkness movie adventures, you get to watch, rolle a few dice, and await the inevitable outcome.