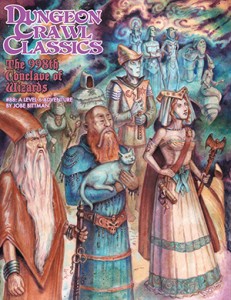 Hail, wizard of Aereth! Forget everything you think you know about the magic. Mastery of the occult lies beyond the comprehension of your world’s primitive societies and warring kingdoms. Your cantrips and legerdemain are mere parlor tricks in the face of true power. The Star Cabal, peerless practitioners of the arcane arts, extends a rare invitation to join their ranks. Hurtling through the cosmos in a marvelous flying city, the magicians are revered as lords of creation by the spacefaring races of a thousand suns. Ascend to the stars and seize your rightful seat in the vaunted halls of power… if you dare.

This adventure has problems. Notably, I’m not entirely sure if it is an adventure. It’s probably closer to a setting book. Or maybe an adventure outline, much in the same way Hoard of the Dragon Queen was. I’m not opposed to fluff; I like fluff and think it’s great inspiration to creating your own game. My problem in this area revolves around expectations. When you expect X and you get Y then … well, not good. It’s also got some organization problems and can at times be maddeningly non-specific.

The book describes the conclave of wizards and their floating space city, as well as a bit of outer space around it. It tries to tie thing together by having an “adventure” of three scenes woven throughout it. The party gets an invitation to join the Conclave of Wizards, but has to seek out the portal to get there. Then the city is described, along with some NPC’s. Then a wizard duel is briefly described as part two of the parties initiation into the COnclave. Then they need to go to a planetoid for a briefly described part three. The organization of the three parts, woven throughout the fluff of the city/conclave, is a bit off putting and confusing. Compare this to Scourge of the Demon Wolf or Valley of the Five Fires which give you the setting up front and then spend a few pages detailing their adventures.The barrage of information mixed up in the book makes becoming familiar with the environment a pain and makes picking out the actual adventure a pain. Uncool.

The city/Conclave is an interesting place. A kind of techno/wizard enclave in space, visited by aliens, it comes off a bit like the city in Vault of the Drow, a cosmopolitan place full of wonder. It does a much better job than Vault in conveying that Wondrous vibe, and the Conclave comes to life much much much better than anything in Vault. A rearranging cityscape (Vornheim anyone?) combined with a mysterious wizards guild combined with aliens. All done DCC style so it’s not grim-dark but more Ankh-Morpork turned up to 11. (As DCC is wont to do.) The wizards of the conclave are wonderfully DCC, each different and with a touch of the bizarre. It really does a great job of conveying the weirdness of the city and of the wizards in the conclave.

Parts of the city though are frustrating non-specific, in the same way the 5E DMG adventure generator is. “Hmmm, [roll], there’s an invasion, ok, [roll], and the villain wants power. Hmmm. Ok …” In some ways the wandering table in Vault of Drow is better for conveying the weird of that place. ASE1 may be the gold standard here, with it’s tables providing a wonderful amount of colorful things, events, people, etc. In contrast this book gives us “1d8 cabal guard and 1 guardian” or “a band of rival initiates attacks.” This is part of what gives it the outline feel, as opposed to colorful things you can run at the table. I REALLY disliked Seclusium of Orphone, and this feels more like in that places than it does the more specific and colorfull far of a ‘normal’ DCC adventure.

The actual adventure is vaguely described, again leading to the outline comparisons. You get a message, maybe a bird drops it. You go to an island with a volcano. There’s a monster outside a tower. You go in the tower. End of part one. I’m obviously being hyperbolic here but there really isn’t much more than that. [Also, the amulet you need to gain entry to the tower is never given to you. Not a big deal, you can throw it in, but its absence is, I think, representative of the confusing nature of the organization.] The second part is perhaps even terser. It amounts to little more than “You need to challenge a wizard to a duel. The map of the arena is on page X.” Again, hyperbolic, but not overly so. The guidelines are “pick a wizard for the party to duel.” The third part of the adventure is longer, but again maddeningly generic. There are a dozen or so planetoids, a wandering table that doesn’t have enough to support a breadcrumbs adventure, and a finale location that, again, is more generic than evocative.

The book DOES do a good job of making Wizard characters feel special. From special quarters for the wizards to NPC’s referring to the rest of the party as hirelings, the wizard in the party will get a kick out of being special. The city and Conclave/guild is also a good plot hook device for launching the characters into grander adventures. In a sense, you’ve graduated from defending your planet and are involved in Bigger Things, Green Lantern of Earth.

It does have some nice DM advice, in particular explaining the hook and how characters might come to find out more about the rumors in it. The entire “adventure” is more of an outline. “Here’s a bunch of stuff. Pick one of these plots. Listen to your players and determine what happened to the missing NPC based on what the party is talking about.” Clever, but … unfulfilling?

This is a nice setting/locale supplement for DCC. You can certainly get a lot of inspiration from it, and it would be a much more interesting model for Sigil than I ever found any Planescape product to me.

I don’t often mention art. The cover is kick ass. It probably set expectations with me that could not be met.