The Weird Worm-Ways of Saturn 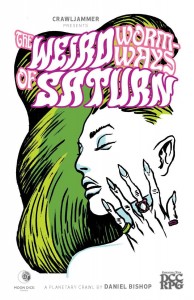 Saturn. Well known for the weird magnetic energies of its core, which attract even non-ferrous metals, and which pulled many a would-be Crawljammer to his doom in the early days of space exploration. Saturn. Legendary home of fierce Ape-Men and even fiercer giant worms, which devolved from a great civilization that once worshipped the vast demon-god Tsathoggua before the first great reptiles appeared to dominate long aeons upon the Earth. It is said that the collapse of that civilization caused the weird energies of Saturn’s magnetic core. Many, but not all, of that demon-haunted culture’s works were drawn into the planet’s crust, there to be crushed and consumed. Even so, there is a flux to that strange magnetic attraction. Once in several thousand years, the magnetic forces wane for a period, and ships may safely approach or land upon Saturn. The technomancer Satrampa, who has long made her cold dwelling upon the frozen ocean-moon Tethys, has predicted that such a time is near, and seeks adventurers willing to brave the ringed world’s dangers. There they must locate the Vault of Zin the Meticulous. She will pay a man’s weight in gold for the black onyx ring long-dead Zin once wore upon his right hand. Failing that, she will pay the same weight in silver for proof that the Idol of Tsathoggua which one strengthened the ancient sorcerer’s spells is no more.

I bought this based only the strength of the front cover. I’ve got some weird fascination with what I call “70’s fantasy art”, but which in reality probably spans the late 50’s to the early 80’s. Anyway … This is part one of a two part adventure. It represents the hex crawl with the Vault of Zin presumably appearing in part two. There is something appealing about this adventure … even though I find many of the elements difficult. It could be that I found some of the elements very appealing and am romanticizing them over the other content.

Saturn has intense magnetic fields and you can only be on the planet with metal items for a brief window every 1000 years or so. The amount of time the window stays open is variable, and even then using metal objects can be difficult. The party hears about the window and Zin and maybe even Satrampa, and goes to Saturn. A hex crawl ensues, from the Crawljammer landing site to the Vault of Zin.

The group could meet Satrampa at the beginning. They could not. She’s a very interesting NPC and it’s one of the elements I found appealing. Unknown to all, she’s Zin’s former lover. She spreads rumors/hires groups knowing that either they will recover Zin’s ring … and be possessed by him, thereby bringing him back to life to join her, or that their souls will be gobbled up in pursuit of the ring and thereby fuel Zin’s continuing undeath. I’ve seen “NPC sending the party to their doom” before, but this one appealed to me. A kind of melancholy “Killing an Arab” bit of mood, the enui that immortality brings, but with a purpose behind things. I also liked her guards and the mechanical brain controlling them. Nice opportunities for mighty deeds and built with weaknesses that the players can exploit. It’s too bad that this entire section may not get used. Nice fluff/background material for a Crawljammer game though.

The hex crawl is … not the strongest. Saturn is briefly described as a kind of Dakota badlands sort of environment. It’s not very interesting. Riverworld-like canyons run through it, and these represents the paths the characters will most likely take. The hex-crawl map is about 42×42, with each hex being ½ mile. In these 1764 hexes there are about 10 static encounters and a simple d7 wanderers table. If we are generous in saying only about 10% of the hexes have a chance to be realistically explored, then it’s still about a 5% hit rate for pre-programmed. I’m not a hex-crawl expert but it seems sparse with a far too small wandering table. I may be wrong here. The wandering table DOES give a nice activity, four or so, for each encounter. IE: a returning war party has four or five different things they could be engaged in. This bring the wandering table up to 30 or so entries, which IS enough to sustain play. Particularly with the social element of the ape-men emphasized the way it is. This social element, and the detail on the wandering table, is one of my favorite parts of the adventure.

Some of the ten static encounters are quite nice. Different sorts of ape-man villages, from friendly to war-like. A large decaying Dune-style sandworm. Nothing gonzo off the charts but nice solid little encounters. I particularly like the way the ape-men are portrayed. Not explicitly war-like … even the war parties. They got their own business going on. This lends an air of authenticity to them while still proving some contact opportunities in which the party can either get in to trouble with them or help them.

I’d like to call attention to something the adventure does that is important. The mechanical guards of Satrampa (that the party will likely never meet) have a weakness (or two) that the party can take advantage of. Likewise, the “evil” ape-men in the adventure have a weakness, built in. If the party is captured then they are taken for sacrifice. Not too surprising. But Bishop has built in an escape plan. Their idol reacts to the player’s presence by opening it’s mouth! Which scares the shit out of the evil ape-men villagers since they’ve never seen it before, their village being MUCH newer than the last time non-Ape men visited the statue. This is a nice way of building in an escape plan for the party. Both of these are good examples of a “neutral tone” for the adventure. (The social villagers, who don’t attack on sight, might be another good example of this) This reflects the DM as neutral judge rather than the adversarial relationship that some (most?) adventures tend to take. It’s refreshing to see.

The imagery in this is a little flat. The canyon-lands environment is not presented as … alive? as I think it could/should be, especially for being on Saturn. Otherwise, it’ a decent adventure. It’s right on the edge of something I would keep, I think. It’s got enough different elements though I think I’ll keep this one. Let’s hope part two lifts it up even more.

1 Response to The Weird Worm-Ways of Saturn