Valley of the Five Fires 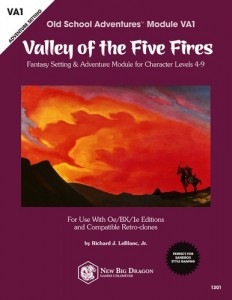 This is either a region module with strong adventures supporting it or a sandbox with strong adventures and great regional supporting material. Either way, it’s pretty good at supporting play, which is, I think, the major theme of my reviews. If you have ANY interest in anything I mention herein then you should pick this up. What’s interesting is how it does it … which is unlike the vast majority of products … especially those I tend to give high marks to. This product is organized. It’s focused. That makes it easy to use to support play. It’s a sandbox, and a organized one. I’d have to go back and re-read Scourge of the Demon Wolf to be sure, but my impression is that it’s better organized than Demon Wolf and does a better job being a sandbox … and Demon Wolf is pretty good and got a big thumbs up from me. Five Fires is VERY good at what it does well. I’m going to get nitpicky at the end of this review and clarify my comments on how it differs from the style I generally give high marks to.

The first half of this 55-ish page supplement is, essentially, a region supplement. It describes a mongol-like region with five tribes territories converging on a single point. “The Cradle of Man” is a neutral zone and is the titular Valley, with each clan keeping alight one fire on a mountainside to signify their devotion to the neutrality treaty. The valley is off limits to everyone. The region is given a brief history. And I mean BRIEF. The background material here is focused in a way I’ve seldom scene. You immediately pick up on what’s going on and have more than enough information to to carry any adventure forwards. That’s in maybe one column of text. Let me repeat: ONE. COLUMN. Extraneous nonsense is not present and every therein is focused on how the players will encounter the region through their players. It supports the type of information the DM in order to run the adventure for the players. It seems obvious when written, but FAR too few adventures actually do this. There are a couple of new classes and spells. There are some brief descriptions of two towns. These are 1 page each. Most of the page is covered with a reference table of the town vendors. PERFECT. There’s one page on the tribal customs/lifestyle of the nomads. PERFECT. How many times have you had to sit through about a zillion pages on how the New Culture People make eggs for breakfast? This supplement has just enough information for the DM to add some local color and play off of … without wasting your time with endless detail and nonsense. Two pages describes all of the key NPC’s. There’s a reference sheet ala Ready Reference Sheets, for the monsters. There a couple of pages of NPC’s, in table form, in case you need some random tribesmen with detail. They each get JUST enough detail. “Bob is neurotic, greedy, and brave.” Great! Now I’ve got something to work with! The entire first half of the book is the support material. The entire second half are the sandbox/adventures. Literally the second half. I’m not sure if it was planned this way, but the center staple is the dividing line, which makes Hunting the Wumpus for the data you need easy: support in the first half and adventures in the second.

The adventure parts are generally quite nice. You get a “Real” adventure, a quest for some artifacts in the titular Valley. You get some hex crawl features to add to the overland. You get a about three dozen additional adventure seeds to throw in. You also get about a half-dozen so other adventure locations. This is pretty jam packed. If it were me, I’d run the “main” sandbox adventure and throw in just about EVERY single one of the complications and other adventure seeds. Really pile stuff on laye it. Two dozen irons in the fire. After all, a sandbox is about choice and by adding in all/most of the seeds as “tack-ons” to the main adventure then you add depth and a kind of realism to the environments the players encounter. It’ no longer a generic mongol town. It’s now got ALL sorts of things going on that the players can get involved in. Sure, you COULD make the overland a kind of generic travel adventure. Or you could layer on some the pilgrim adventures, etc, to bring the journey to the city, or valley, or sage, to life.

This thing is going to take some study and planning and note-taking, especially in the adventure seeds section, to work in how you layer them all on and make sure you’re familiar with them. But what you will then have will be SPECTACULAR. And the time it takes to turn this spectacular will be A LOT shorter than anything else prepublished you’ve worked with. I promise.

Ok, time to be a dick and pick nits. In order of severity:

It lacks … imagination? Flavor? Something like that. The perfect adventure is some kind of marriage between Apollo & Dionysus. I want the flavor and imagination of an opiate dream related and organized by the world’s best technical writer. Most of the adventures I reccomend fall into the Opiate Dream half of the spectrum. This supplement is one of the rare ones that hits the Technical Writer side. As such it can be a bit dry. +1 swords. Yawn. Wand of Fireballs. Yawn. Remember those NPC descriptions? “Neurotic, greedy, brave.” That’s pretty good, but clearly generic, random, and could use some brainpower by the designer to turn it into something more creative. The writing is flat. As such it comes across as a kind of … journeyman adventure. Fairly normal. An also ran. And that’s really unfair because the core of this is really quite good. Boring treasure, mundane & magical. Boring descriptions. This is the major flaw. The technical writing is good enough to communicate the vision in spite of this. If LeBlanc worked on the color a bit it would be a really stunning product.

A few other minor details. It would have been nice to have the major NPC’s, or at least names/summaries, on a reference sheet as well. The wanderers list, or the map, or the monster sheet or something. Every one who runs this is going to have to write down the names and tribes and personalities/a sentence of goals of them for reference. Might as well include it.

The new monsters could be a bit better described. This may be a subset criticism of the “color” flaw, above. It’s very … reference material from a victorian instead of OMG! WHAT IS IT!!!!

The wandering monster table needs some work. The wanderers need to be engaged in some activity. A small additional ‘activity’ table could help immensely with giving the DM a creativity boost. On a related front, a random entry for a “minor location” on the table would have been nice as well. It’s a small thing and provides a mechanism to get them in to play other than “hmmm, right about time to have something happen …”

Finally, a few of the monster bases could use some information on how they react. How do the mutant ogres, or undead family, or yeti, react to intruders … in an organized way?

I don’t usually do this, but ….:
Richard J. LeBlanc Jr.: Go buy every Harley Stroh adventure for the new DCC line. If you’re poor then just buy Purple Planet. Take a look at the descriptive style. The language used. Add that. Win all the RPG’s.

6 Responses to Valley of the Five Fires