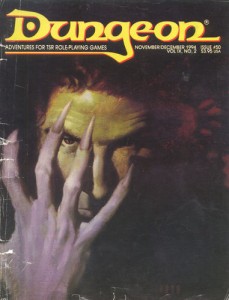 An evil guy is cursed to remain in a ship’s figurehead, and becomes a shadow slowly draining those on the ship, year after year. This is a nice little concept, It could be shortened A LOT without losing anything and in that form could serve as a nice Side Trek or maybe an “Adventure Complication.” I like my adventures best when hook after hook after complication after complication is piled up to create a nice living environment. This little thing could easily be tacked on to any existing sea voyage Going to the Isle of Dread, are you? Or maybe one of those viking adventures? Why not add Yet Another Complication to the (usually miserably inadequate and uninteresting) sea voyage that’s presented in the adventure? Just take the core of this and drop it right in to the NEXT shipboard voyage or shipboard adventure. Having a whole lot going on is a great way to build a realistic environment.

The party is recruited to rid the beach of some giant crabs. The twist, if the party discovers it, is that the crabs are intelligent. You can meet a few interesting NPC’s along the way, and the various crab-men have individual personalities, which is a nice bit of extra detail for the DM to run with. I like this one. The brief portion of the town hook/recruitment could use a bit more in the way of interesting content, and the crab men could have an interesting item or two for the party, but, in the end, it’s a nice little adventure. The monsters don’t attack on sight, which means the adventure immediately has more possibilities. Long-term allies? More hooks in the future? This would make a nice little hex-crawl adventure or a hanger-on to a home base that the PC’s have nearby.

An epic adventure … with a very rare thing: a third act! A silly premise, transporting a princess to her wedding, turns in to the inevitable rescue mission to save the princess from a beholder. This then segs into the third act: defeating the evil wizard who has cursed a sulten, transforming him into the beholder. It’s the third act here that saves this adventure. The beginning is the usual hackney’d Princess Escort mission, complete with an asshole Vizier tagalong. The princess is, of course, kidnapped. There’s a nice little beggar encounter in the beginning with a cryptic admonishment/prophecy (depending on the parties actions.) What I found interesting was that the same phrase is used regardless of the parties actions, only the delivery tone is different. I’m a sucker for the classics and rather than a quantum railroad this seems more like clever writing. The kidnapping proper is stupid and sets up one of those “doing everything possible in the rules/fiat to keep the PC’s from knowing what happened” instead of just writing it better. You see, the beholder comes on to the transport ship, but there’s a blinding light, etc, that keeps everyone from knowing they face they beholder. It would be much simpler to have the princess TK’d through a portal or something. I hate it when the DM/adventure gimps the party. The beholder lair is nothing special and is full of bad encounters. No challenge, bad writing and advice (why give advice on turning ghouls reactions if the cleric will D the ghoul on anything but a minimal result?) There’s also a puzzle with a “correct” solution instead of leaving the thing open ended. “Blow chalk on the ink to read the indentations!” Uh huh. That’s kind of a stretch. Nice solution, but a stretch. There is a section that COULD have been nice. The party meets some “Desert Ghosts” … but they are not actually undead. Never encountering them before, or knowing their name, they are unlikely to be treated as undead. But if they had heard rumors of “Desert Ghosts” and descriptions and THEN encountered them? A lost opportunity for misdirection.

The third act has a much different style. Here the adventure enters the realm of true fantasy. Magic flames of immortality, effreet, horribly wounded NPC who is still alive and functioning without pause, a magic peach tree … The elements of this are quite nice and the location, or at least the events, FEEL like an endgame location. I would only have two complaints. First, the efreet doesn’t grant a wish. That’s lame. For some reason writers are stingy with wishes and they shouldn’t be. Giving them to the party allows the DM to fudge without remorse … after all the party now has wishes to undue things. Finally, and most importantly, the party is most likely undercut in the end. The boss is an M19. If he defeats the party then the beholder sultan shows us in some deus ex and anti-magics everything, accidentally, and saves the party, defeating the MU, etc. LAME. Better to ding the MU a bit in levels and make this a tough, but honest, fight. Then the parties victory is their own instead of the DM’s magic NPC pet showing up. It’s that kind of shit that makes me HATE NPC’s when I’m a player.

A much nicer adventure than most. I’d have no problem putting an hour or two in to this and fix it up for play … a rarity for Dungeon.

Transported to Ravenloft, kill the evil vampire Baron. Heard that one before? Ravenloft adventures are a one-trick pony: one is all you get before the party kills all Barons, Mayors, etc, on sight. The only difference is that this time you get to keep the domain and rule it as it is transported back to the “normal” world, once you defeat the evil vampire Baron. This starts with opening fiction, always a bad sign. The villagers are ruled over from Castle Pantara, which is in the shape of a cat, and whose guards are called the Black leopards, and their currency is called Pantherheads and Catseyes. Comic Book much? Two pages of backstory, forced & railroaded into picking up a status at the start so you can go on the adventure, “moralistic” approaches to killing villagers attacking you … (You can’t kill the people the trying to kill you? Seriously?) There’s not enough to do in the village/town, which probably doesn’t matter because anyone with half a brain will go to Caster Panther and kill everyone in sight. So, it’s a hackfest with a bunch of … Werepanthers! Bet ya didn’t see that one coming, eh? Hack the werepanthers. Hack four vampires. Done. Lazy, lazy writing, relying on lazy tropes presented in comic book complexity and no charm or depth or detail. On the plus side it does have a Bag of Cats (kind of like a bag of beans) and it does tell you what everyone in the castle is/goes when under attack. That’s something not nearly enough adventures have.