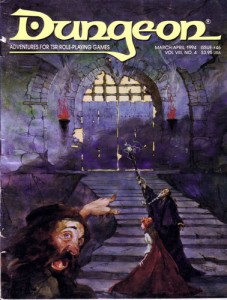 Danger! Folklore! Danger! I Love this stuff to an unnatural degree!

The village stream has run dry, causing the villagers crops to have issues. They want you to fix it. The cause of the problems is a small band of goblins who have captured the stream’s source, a nixie, in order for the chief to better catch a giant talking fish. You see, he’s an avid fisherman. One of the rumors says a local ran across him one afternoon and they chatted while both fished and shared a beer.

OMG! I LUV this shit. A talking fish, a talking owl, and a talking giant rat are a part of the adventure; the local ‘kings’ of the animals. The goblin chief being an avid fisherman is great … as is the STUNNING gold and ruby fly he is tying in his fly vice to help him catch the talking fish. The goblins are old style. Stinkfoot (who has stinky feet), Swoop (who rides a giant bat), fishbelly (who can swim) and so on. One of them resembles a local boy and likes to go into the village and play pranks, and the local boy gets in trouble instead of him. It’s laid out well (especially considering the year), has a decent number of NPC’s, and the text is relativly terse and evocative. It’s the OLD folklore goblins rather than the generic sword-bair goblins that D&D usually presents. This adventure gets a hearty Thumbs Up from me …. uh … I’m not sure … this may be the first one in Dungeon I’ve ever done that for, without reservations?

As little site that describes a band of bugbears that makes their home on the back of a giant turtle. So many side treks suck. This one has a very interesting bits about sacrificing captives by tossing them in to the turtle’s mouth, but otherwise is generally unremarkable.

This is a fetch-quest adventure in a plague-filled city that you could mine for ideas. You run around gathering ingredients for a cure while chaos surrounds you. It’s a curious mix of generic wandering tables, string ideas for location encounters, and then too much text as some of the locations are expanded upon. The wandering encounters don’t have enough detail. You meat bandits. Or a mob. Or someone else … with no description past that. The locations seems to expand on the wandering table. You meet a vigilante mob, or a kangaroo court, or a doomsday cult. The shorter ones have enough interesting detail to really cement the encounter strongly in your mind while not boring you. The longer ones go into excessive detail on the contents of a bedroom. It does contain that implied morality I hate so much: no X for killing people who are trying to kill you. If you think of this one as a broad outline and mine it for ideas, and as, say, a piece of inspirational fiction that you can build on, then you could have a nice little thing to toss in to a city game. But there’s work. It would be like reading a, interesting newspaper story and building an adventure from it.

This is a brief visit to a northman city and then an adventure in a duergar mine. It probably has a large mass battle with 150 or so duergar and a set-piece ending. The basic outline is ok. You sneak into a northman city, meet a rebel leader, get betrayed and flee to the mines where they are constructing a giant iron golemish thing that will allow them to declare war on the dwarves. (The high priest is being controlled by a duergar artifact that hates dwarves.) You adventure through the upper mines, meet some drow allies, and then hit a ruined duergar fortress where you have the mass battle. In the lower level you have a set piece encounter when the high priest tries to bring the iron golem to life.

There are some good ideas here. The whole rebel leader thing, and the potential drow allies, the crazy scheme, etc are all pretty nicely done. Even now, a couple of days after reading it, I can remember vast portions of it. That means it ‘stuck’, and that is a sign of some good writing. It’s wordy and railroady, but that was the style at the time. It’s the ‘stickiness’ that impresses me. The core of the stickiness is not even conveyed through the extensive verbiage. The core is communicated quickly and briefly. It then uses a bunch more words that don’t really add much. A pretty decent adventure, given the style at the time.