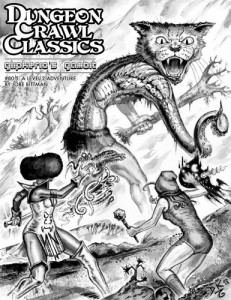 Atop the highest spire of Mount Tyche, your patron’s temple is under attack. A demonic miasma rolls down the frost-blasted peaks leaving a vile stench and foul magics in its wake. Winged black creatures roost along the crumbling solitary road to the temple. The bloodthirsty shrieks of snow apes and the moans of the tortured dead echo from the jagged rocks above. Your patron has saved your skin more times than you can count. Now it is your turn!

This is an assault on a time-travelling wizards lair that he’s just recently taken over. I’m conflicted here. What’s present is, oh, I don’t know. Confusing isn’t the right word. Muddled, maybe? On the one hand there’s some great little things presented in this adventure. Some decent atmosphere, a decent set-piece finish, and a couple of decent encounters. On the other hand … I’ve gotten the overall impression that this is a … dull? adventure? Maybe it’s made promises that are not being kept?

The idea is that you are contacted by The Fates. Their temple has been taken over by a wizard and they need you to free it. (There’s a nice bit in there where they give you a bit of thread from the spinning wheel to tie around your finger. Nice way to work in the myth and give things a more folklorish/realistic vibe.) From there you climb up a mountain on a road (or, the hard way) with five-is encounters and hit the temple up top with maybe seven encounters.

There are these great random events on the mountain. “TURN BACK NOW” chiseled into the mountain in giant letters, dead birds raining from the sky, Crimson slush, Art & Crafts messages imploring the party to go back, ala Blair Witch Project stick figures, frozen hands severed at the elbow sticking out of a snowbank with their finger outstretched as if to say “Stop.” Those are all REALLY good little things to drop in and exactly the sort of flavor bursts I’m looking for. There’s also a REALLY nice corpse gate encounter, with severed limbs and a mouth for a keyhole. The final encounter could be thought of as one of those video game Boss Fights: there’s some amount of puzzle going on during the combat but not enough to be frustrating and it’s telegraphed enough (with enough DM advice) to make running it almost certainly a major hoot.

There are two or three things here though that mar the overall attempt. The first is the lack of … theming? This is the temple of the Fates and yet there’s really only one adventure element, a stairway, that brings out that theming. “Not you explore the underwater volcano lair of Abraxis, Terror from the 10th planet!!!” “Uh … Abraxian 10th planet underwater architecture looks a whole lot like a 10×10 grey dungeon corridors …” I might say that it’s an overall appeal to the mundane rather than to the fantastic. This would extend to several (most?) of the encounters. Snow apes throw rocks at you from above. Devilkin swarm you and pick your pockets. There’s an ice bridge where two dudes attack you. I generally summarize a lot in my reviews, but in this case I’m not doing it as much as I usually do. For these “mundane” encounters there’s really not much more than what I’ve described to you. I’m not asking for each encounter to be a stand-alone set piece. But if you take the time to include something then you should take the time to make it awesome, for whatever definition of awesome is appropriate to the encounter. Never in my life do I ever want to hear “Sometimes you just have to fight a couple of kobolds.” No! reject! Reject! REJECT! I never want to see any sign of that, especially in a DCC adventure.

These .5 adventures from Goodman seem of lower quality than the others. I don’t know why. It almost seems like they made a single writing pass through the adventure and then sent it off to the printers. The “awesome it up” pass doesn’t seem to have been made. Maybe these are intro adventures? If so then this is a critical error. Introductory adventures should be THE MOST awesome of your published material. Those are the ones that will get the most exposure and introduce the most new players/markets to you, aren’t they?

Some nice things in this to steal and overall of much better quality than the vast majority of adventures. I’m a harsh critic and some of these “almost” adventures get a raw deal from me.