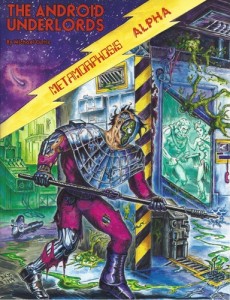 The Knower of All Things has been kidnapped! Mysterious agents have abducted the village shaman in the dead of night, leaving a hideous trail in their wake. Now it is up to the brave and strongest members of the tribe to rescue the shaman before he falls victim to his captors’ nefarious plans. Before their journey is through, the village heroes will find themselves in an undreamt-of place, battling faceless foes. Is your mutant up to the challenge?

Be aware: I LUV post-apoc and want to have millions & billions of its babies. This is a decent little adventure that reminds me of the SAMURAI base in Legion of Gold.

The village elder has been kidnapped by something and the party is sent to bring him back. They follow the slime trail to an entrance to metal caves under the ground and follow it further to a small android base where they vivisect people … Ouchies! The hook here is lame, as most hooks are. Rescue mission. Ho hum. Never seen that before. Just a MODICUM of effort could bring a lot to this. Go ahead, steal the hook from THE STARLOST and make the party heretics. Idk. Just about anything else. (EXCEPT caravan guards! NO caravan guards!) There’s a little bit of investigation in the village, followed by an encounter before the party reaches the metal caves. I’m struck by two things in this part section. First, the overland encounter reminds me of a Jim Ward encounter. Some giant bugs are slurping the slime in the trail. Spook them and they attack. If THEY get surprise they chitter at the party as a warning. Smart parties prevail. The investigation portion could have sacrificed a few background/introduction sentences for the names/personalities of a couple of the village elders. Bobs an asshole with elephantiasis and Fred hated the elder and is both rash AND has full body psoriasis. Making the beginning of the adventure seem less throw away would be a great thing and it wouldn’t take much work MICHAEL CURTIS.

The second part of the adventure is inside the metal caves. There’s a short journey through them on a SPECTACULAR map. It reminds me of one of those 2-page pull-out maps from comics of a Secret Volcano Lair or Miraclemans Olympus. Or, maybe, of my first love: the North America and Pittsburgh map from the (2E?) Gamma World boxed set. Weird annotations on a large map, only VERY small portion of which is used for the actual adventure (remember, you’re following the slime trail.) THIS is the kind of inspiring content the mind years for. What is that? What’s going on over there? True Humans?! What are they doing there?!? It’s a world of mystery and wonder just begging the DM to bring it to life. There are only two encounters described. One is a run-away game of Simon that again reminds me of Jim Ward: don’t touch NOTHIN! The other one delights me: mutant talking cockroaches. I’m no sure if its the junk-bots (ad-bots?) from the Transformers cartoon or talking cockroaches from other media, but I just LOVE he concept of a tribe of talking cockroaches, especially when they are not immediate dicks, and these guys are not immediate dicks. That’s the kind of “following the premise to its logical conclusion” that I like to see. Elves that are more than just humans with point ears, and mutant creatures who are more than the sum of their tropes.

The base is near the roaches, and the roaches may be of help getting in. Inside there’s a three-story vat complex with catwalks making up most of the surface area and a couple of rooms hanging off of it. The central catwalk/vat area leaves a lot of room for hiding, chasing, sneaking, etc, and I really like that sort of thing as the central point of the map that the rest of the rooms are built around. That’s the kind of multi-level environment that I think really opens up play options for the characters. The actual encounters in this area are more typical of the room/encounter construct found in most adventures. The rooms got a monster and the monster probably attacks. There might be something strange in the room. Mutant bugs/slime and androids limit the options a bit, especially since many of them are located in rooms that don’t really off much in the way of “fun” combats. Giant thug bugs on the underside of the catwalks being a noticable exception. There is a great mechanic introduced for the fire suppression system in this area, and several monsters which may cause the party to want to use heat attacks. That’s a nice set up and once the party learns about it it should put them in a tight spot as they worry about how to KILL IT WITH FIRE!, or better yet, use the fire suppression system to their own advantage.

There’s not going to any awards won here, but it is a nice solid MA/GW adventure. The main adventure should give you enough for a night or two of great play. The expanded map for the metal caves is just a nice little bonus.

1 Response to The Android Underlords