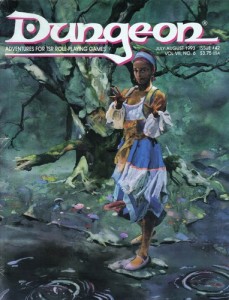 A dryad with a mantrap plant has a charmed male companion. That’s the entire content of the two pages. Nothing else interesting.

Most D&D backttory, especially in Dungeon, is crap. This one isn’t. Oh, it’s long and a pain in the ass and not relevent to running the adventure, but it DOES touch on some larger, weighty issues. I like the way this starts, with the party essentially in the middle of a city during a minor coup as the secret police are beaten and, I imagine, the citizens at the barricades are working with the rulers to dismantle the giant propaganda posters of the past. Images of the Arab Spring, with the people in the midst of the jubilance that only the hope of change can bring. The read-aloud for the village the party journeys to is actually GOOD, and the various elements/advice (buried in the surrounding verbosity) are good. “The sails are useless when you near the isle; the winds never blow there.” and “Beware the lake monster”, which doesn’t actually exist. The picture painted in the back story, and at the village, is one of melancholy, that is then juxtapositioned with the euphoria of the revolution. It’s the vibe that Ravenloft tries for and so often fails at. There’s also some bits & pieces of good imagery, such as the winds/sailing thing, and a skeleton in armor with bits of rotting flesh poking out. I do a terrible job transcribing these vibes, but the adventure does a good job … when it does it. This is NOT a terrible adventure. A slow, melancholy feel, but not terrible. It IS verbose, which was the style at the time, but it does a lot right, like telegraphing that a flesh-to-stone monster is coming, and adding small flavorful details in fast bursts.

In the end, there is a story going on in this adventure. The party get to witness parts of it. It’s not a railroad though. There are not a sequence of events that MUST happen in order for something else to happen and the party just happens to bear witness. This is a major sin and is something that so many 90’s, 00’, and modern adventures are guilty of. “Witness to history”, so to speak. No, in this adventure the action is over. The party is chasing something else, tangential, and stumbles upon the story, discovering it as they go along. In this way I might compare it to something like Tegal or Shadowbrook: a kind of house/manor environment you wander through discovering weird things, except in this one you also looking for someone, driving your exploration, and you discover bits of what has happened.

This is worth reading, and maybe worth salvaging.

Another 2 1/2 pages to describe a single encounter. How the fuck they got away with this I know not, but evidentially it was one of their most features, according to the letter column. A MU14 and his 7 zombies are confused & disoriented, looking for someone who does not exist and reacting negatively to uncooperative witnesses. Fight or Negotiate?

Deliver some ransom money. This has a decent back story/setup (and at one page is the sole of terseness, by Dungeon standards.) Border fief, questionable births, and an evil advisor all make for a decent set up … that will never see the light of day because the dude is just going to pay the party to deliver cash to the kidnappers. The kidnappers have decent flavor & personalities … which will never see the light of day and they exist to say about 4 sentences, total, and then get cut down. And of course, the ransom is in a chest that can’t be opened, at all, by anyone but the target, otherwise the adventure twist would be ruined.

IF you have this issue then you might read one for some inspiration i both the back story and kidnappers. You could build something decent using those two points as foundations. But I wouldn’t go out of my way unless you have some morbid curiosity with things that only MOSTLY suck in Dungeon Magazine.

Legacy of the Liosalfar
by Chris Hind
AD&D
Level 1

Fairy Tale Alert! The party are poor village bumpkins sent to find the miller, who has disappeared with the coinage needed to buy seed for the crops. What ensues is a series of faerie adventures, in the older sense of the word. Ravens that speak in a squakish common, mud-people taking exception to being trodden upon, sprites with sleep arrows, a talking spider, a riddler gnome, and the Feast … always a feast.This is a pretty straightforward adventure with not a lot of detail. The encounters are all classic faerie encounters and ould be plucked out and/or used if you added s a bit more detail. Only one or two of the talking creatures you meet have any personality. This is a TRAVESTY; they should all have some pit of personality. The mystical element of the faeire could also be played up a bit more. Combined with the lack of personality for the players village … this is just a generic encounter-fest with a low-level faerie theme. And while I’marracted to fairy tale stories I’m not THAT attracted to them. Still … it does have faeries …

The Price of Revenge
by Steve Kurtz
Ravenloft
Levels 4-7

A fairly normal Ravenloft adventure. Mists take you somewhere new, freaky little kid, small town investigation, curse, kill the vampires. The predictability here is the worst part. The freaky little girl is nice & freaky. The town portion is just a pretext to meet the vampires-in-disguise and get the gypsy mission. Then you kill the vampires. The basics of this are classic, and therefore not bad in and of itself, but the whole thing is so … telegraphed? Mists! Watch our for vampires & werewolves! White Death? Must be vampires. Look, the only two people who have any detail ar the mayor and his wife the doctor, that’s weird, eh? The pseudo-slavic post-renaissance town vibe is done well, but the DREAD isn’t very present. It all feels like an homage to the original Ravenloft adventure. If you were in to a straightforward-ish classic Ravenloft railroad with no particular interesting detail or dread, then this is the adventure for you!