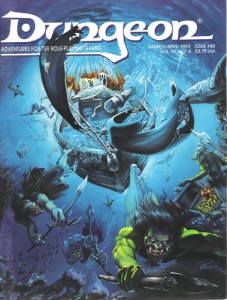 Song of the Fens
by J. Bradley Schell
AD&D
Levels 1-3

This is an adventure in a swamp to find a tavern-girls anonymous singing love interest. I must have gotten soft during my vacation; the core idea doesn’t suck. While passing a tavern near a fen a girl leans out of a second-story window with the damsel in distress/wont’t anyone help me routine. She’s promised to another but enchanted (not literally) with the singing of a voice in the fen across the road. The party goes in to the fen to find the voice. There they find mud pits, ghouls, zombies and the weird troll that skiffs the swamp at night, only eats fish & veg, and has an AMAZING singing voice. He’s a friendly guy who doesn’t speak much common, is smitten with the prospect of the maidens love, and has some baggage from his youth that causes him to fly in to a murderous rage when he perceives a slight/insult/teasing/mocking. Bringing him back to the inn causes the maiden to freak out, the troll to get insulted, and a fight to emerge.

The whole idea is a cute one. Young tavern-wench brought up on too much Tv … errr, I mean minstrel tales. She doesn’t want to marry the boring knights-son/bro obsessed with being a hero/jousting. Instead she’s fallen in love with the sweet voice in the fen. The sweet voice is a non-traditional troll, but with some baggage. It’s wrapped up in too many words. The rewards are not worth it. The fen is FAR too large to explore effectively, especially for first level party. Eight ghouls and a troll, after a lot of wandering monsters and environment hazards? That’s a bit too much for me.

The bar wenches have names and a 1 sentence personality, which is a GREAT addition. The ghouls in here are nice. They are portrayed more as cannibal humans rather than undead. I kind of like that. The fact they live under a tree in a dirt hollow underground is not really consistent with “human” and is instead more inline with “undead”, but I still assert that the non-traditional undead are the BEST undead. Except skeletons. Basic skeletons should always be Harryhousen skeletons. 🙂

Five pages of text before the adventure starts. Oh Dungeon, I can’t quit you! There’s an Egyptian temple. The party is conned in to going there to get two artifacts, and followed by the evil con-artist, who ambushes you at the end. In the fifteen room temple you fight a couple of snakes and then a medusa. The medusa battle is one of those big fight setups with several creatures of different types working together to screw the party. Eighteen pages for a short overland and fifteen room. My. Life. Is. A. Living. Hell. There’s a cute environment feature, the Sea of Glass, and the entrance to the temple is through the upper windows … which are now ground level because of the sand. That imagery was communicated well, as was a couple of the sand hazards in the temple. Other than the buried temple imagery, this thing has nothing to offer/recommend it.

At a rural inn, the party is hired to retrieve some stolen giant eagle eggs. If the party questions the inn-folk then they can avoid most of the adventure encounters. If they instead go to the eagles nest then they chase the thieves through the forest and end up in the same place they would have anyway. Weird. The inn has the same problem that most older adventures have: it’s described fully. It’s almost like the writers are stuck in the old “dungeon map key” style of play. Instead of abstracting the inn map and describing the people IN the inn, instead the inn if fully described, along with the people in it, in the rooms they are found in. Only the inn employees are described and not the other travelers. That’s a mistake. Even if they know nothing a couple of words describing 10 or so people would have gone a long way. A simple table telling us what the employees job is, where they are found, a personality word, and what they know would have saved several pages of text. The rest of the encounters are pretty straightforward. Not much treasure. A couple of ogres, some spiders, etc. Even the climax is just a wizard in a ruin with some charmed soldiers. This is just a normally adventure. If the inn were shortened/tightened-up, and the encounters beefed up (say, with stuff like that Nymph encounter in Fey Sisters Fate …) you’d have a good adventure. But that’s essentially a rewrite.

This adventure will either be linear or it will be boring; your party’s choice. If they do what they are supposed to do then they will explore a linear underwater cave system, meet some sea elves, and then explore another linear underwater cave system. If they don’t play by the rules then they’ll shortcut things, be bored, finally find the main adventure location, and go home after nuking it. (They have scroll with a nuke spell on it and are supposed to nuke an underwater hobgoblin lair.)

3D adventures don’t work. I’m sure that someone, somewhere, has written a decent one. But in general they don’t work. I’m no historian but I suspect that the underwater and flying rules were meant for players to solve problems in the 2D world. Swim a river in a cave, or fly up to a new location to explore. extended adventures underwater or in the air just don’t fit in the groove well. The DM/adventure has to give the party a bunch of stuff to allow them to fly/breathe, and then everyone gets to have fun with the new movement & encumbrance and environmental rules. Yeah! Bookkeeping!

It’s no different here. I can’t see how one of these 3D adventures would work unless it’s location/objective based with a strong social aspect. The ocean/air is big, you need talky things to interact with to lead you in the right direction and a reason to go to a location that you could/would otherwise swim/fly around. It’s “solved” in this adventure by using an underwater tunnel. A dungeon corridor filled with water. Yeah? I would assert that’s not an underwater adventure. An underwater adventure is not under the water, requiring water-breathing. It should be a 3D adventure with unique aspects of the underwater ecology/lifestyle present. I don’t know what that is. If I did I’d cashed in on my riches by now. All $1.98 of them.