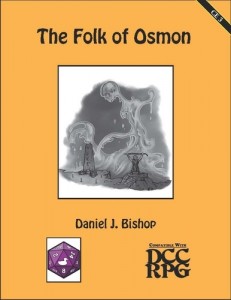 A mighty civilization once thrived where now only lonely Osmon Mire stretches across the land. The crumbled and vine-laden ruins of ages-old buildings arise here and there from the reedy mud and water. The remains of statues and derelict temples adorn low hills rising from the muck. Fell beasts roam the mire at night and man-like shapes haunt the swamp. After dark none willingly passes the low hill, with its blood-encrusted altar stone, where the Folk of Osmon are said to sacrifice their victims.

This could be a short, but jam-packed, encounter with blob-people in a swamp. This product describes a small 5 encounter area in a swamp, along with several new, weird, creatures that dwell there. It then follows this up with four adventure scenario ideas that the DM can use to work the area in to their game. Alone, nothing is too impressive. Smashing everything up together though would yield an exciting evening!

Hmmm, I’m not sure where to start with this one. The map is pretty simplistic, with just a generalized “swamp” setting with a small road running through it. Off to one side is a hill with some statues and rubble on it, and a small stone “alter” in the middle. There’s another hill nearby with a different statue on it. That’s it. Not exactly awe-inspiring in its capacity to support interesting play. But ….

Let’s combine it with the creatures that live in the swamp. First and foremost are some swamp-people. They are essentially humanoid blobs without sex or personality; the titular Folk of Osmon. They enjoy long walks in the moonlight … looking for victims, chucking gooey protoplasm at people … to sacrifice them, and reproducing through budding. Accompanying them in the swamp are some weird crocodiles with tentacle eyes, slithering vine monsters, will-o-the-wisp type creatures who are great at luring dwarves to their doom, and giant psionic salamanders who drain your INT. Oh, and the god of the protoplasm people: a giant ameboid. These are all GREAT creatures. Let’s take the Faerie Lights, for example. They feed off of precious metals and, in a play toward the screw-job monsters of old, they can smell like gold! That’s a great play off of the common DCC statement that dwarves can smell gold. Oh yeah Mr Dwarf? Well maybe it’s NOT gold you smell … The monsters here are very good, as DCC monsters almost always are.

The encounter locations are nothing special and are one of the way the product could have been improved. Given the limited number and the small scale, quite a bit more could have been with the locations. One of the hallmarks of DCC are the Mighty Deeds … but Mighty Deeds need an active environment to play off of. And an active environment this ain’t. Crumbling walls, fetid pits, rotten logs, quicksand, all could have made for an active environment … but they just are not present. Instead there’s a hill with a statue on it. Or a pool of water. Uh … not very exciting in a combat situation. Combine this with some boring mundane treasure and no magical treasure and you’ve got a pretty serious GONZO gap. There could have been some opportunities to get some biological items off of the god, or maybe the blob people. “I wear a blob-person suit to get close to the blob god to steal a proto face-egg that does BLAH.” But alas, that’s not presented.

The adventure ideas presented are nothing too special. Oh no! You’re captured by the blobs and going to be sacrificed. Or .. Oh No! Bandits attack … and then blob people attack! Or .. You have a map to buried treasure. The most interesting is the one in which one of the blobs turns out to have a personality and sex … and falls in love with a PC. But … what if you choose hidden option ‘ E’ … if you take ALL of the encounters and mash them all up … then the party is looking for buried treasure, attacked by bandits while digging it up, both groups surrounded by blob people and attacked maybe forcing them to work together and/or being dragged off to be sacrificed, where the unique blob-person falls in love! Now THAT’S an evening of entertainment! The bandits are given one leader with some decent personality but, given that the party is meant to work with them when attacked, could have used a couple of more with a decent or two each in order to bond with them better. There are a lot of really good ideas for using the unique blob-person on a ongoing basis … and lot fewer interesting complications presented for everyone/thing else.

This is a much better effort than CE2 and I’d gladly pick this one over that. If the treasure situation had been beefed up a bit, as well as the NPC’s and maybe the environment, then this would easily make my best of list.

1 Response to CE3 – The Folk of Osmon