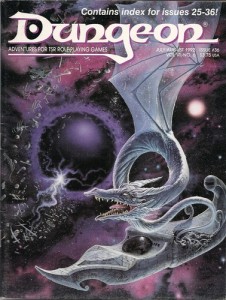 Time to clean out the rats in the old woman’s cellar, except this time the old woman is a dead wizard and the cellar is his tower in the middle of the city. I’m not a fan of ‘joke’ adventures, although I do like humor in adventures and I LOVE the absurd, especially when it comes to wizards. Willie Walsh gets close on this one to delivering a fine adventure. His descriptions of the wizards tower and environs and history get REALLY close to that kind of OD&D non-standard wizard archetype that I adore. It’s got a nice Discworld Unseen University vibe; this kind of mix of the academic and the absurd. He’s got a decent environment but it comes off as very one note. Only one or two of the creatures in the tower will talk to you, and there are A LOT of creatures, so it devolves in to a monster hunt where you open a door, kill the monster, and move on. Further, while several of the monsters are nicely located (water weirds in fountains, cifal’s in beehives, the brass snakes that make up the chandelier animate, the tools in the garden shed animate, etc) there’s not a lot of THE FANTASTIC apart from this. The ability to explore and play with weird things and, for the most part, detect the garden tools early, is missing. I like Willie’s background, and the NPC wizards, and many of the monster encounters … but it’s just a monster hack-fest. In the Ed Greenwood adventure I reviewers awhile back (Eliminsters backdoor?) you got to go in to rooms and look at weird things but could not interact with anything, turning you in to a tourist. In this adventure you go in to rooms and a monster appropriate to the locale appears for you to kill. Neither capitalize on the wonder of a wizards tower and deliver it to the party. In this regard, S3 was a better Wizards’s Tower adventure than these two.

This is a short little encounter. There’s a bridge. It’s got a troll under it. The troll is actually a renegade gnome thief/illusionist. He makes the spectral forces troll retreat to a hidey hole and ambushes the party there. It’s decent, I guess, but I can’t help thinking that an actual troll under the bridge would have presented more interesting opportunities. Oh, look, a monster isn’t actually a monster but something else … geee, haven’t seen that in a D&D adventure before …

This is a rescue caper. A fantasy prison is described and the party is given the mission to rescue one person. You come across some supposedly beautiful city, only to fine burnt out buildings and broken street barricades. The local government is totalitarian and the rebel leader just got tossed in jail. You get to go rescue him, because GOOD. The prison has 36 or so locations, and then the 365 cell blocks. It’s well described for the type of adventure it is. Guard schedules, where major NPC’s hang out, the routine of the prison, the response to attack, and so on. It’s also a little boring. There’s just not much to some featureless granite rooms. It’s also got that Magic Ren Faire vibe that I dislike. Decanters of Endless Water as a water source, permanent heat and chill metal spells, a captured air elemental to provide air flow, and so on. It’s need some extra zing to liven up its step. Some personalities for the dick guards, or maybe some random contents for the prisoners personal items, and/or a quick list of the other prisoners (instead of the random prisoner generator, which IS provided.) There was a one-page dungeon in 2013 that also dealt with a totalitarian state. These might pair up well together, maybe in a Midnight game? Anyway, it does a decent job at describing a PLACE for the party to invade/sneak through. I just wish Ir were more colorful. Yes, grey is a color, but cerulean is more interesting.

The Sea of Sorrow
By Steve Kurtz
!!SPELLJAMMER!!
Levels 7-9

I don’t know if I can review this well, so it may turn out to be a description rather than a review. It’s a dragon hunt, in space. While in a spaceport the party see a damaged hammership return to port. It had been in a part of space rumored to be cursed. The crew, however, discovered the truth: there’s an OLD radiant dragon preying on ships. You’re sent after it. There’s a cutoff system full of places to explore, lots of derelict ships to explore, a ghost ship, dragon flybys … it seems jam packed. It seems … large? Expansive? And seems to fit a Spelljammer vibe well. Places to explore, NPC races to interact with, and a nice … I don’t know, pirate vibe? Not pirate. But a kind of Wagon Train to the Stars vibe. It FEELS like you’re doing a kind of fantasy exploration to a strange place. Travelling from point to point and exploring and interacting. Spelljammer catches this vibe better than any other genre I know. Combined with the weird monster races and their penchant for trade and talking I think it provides a solid base for a D&D game. This one could use a bit of gonzo’ing up; it tries to provide some interesting situations but they come off as a bit mundane. The various locales could also use a few more hooks. You get some short little descriptions of various places but many of them could use a little more interactivity. This would be the difference between, say, Isle of the Unknown and Wilderlands. While Isle, and this adventure, provide just simple descriptive facts (there is a village here), Wilderlands would provide a hook (which is desperate for white buffalo hides.) This could use a little more Wilderlands hooks. Still, a great supplement if you’re running a Spelljammer game.