The Monastery of Inexorable Truth 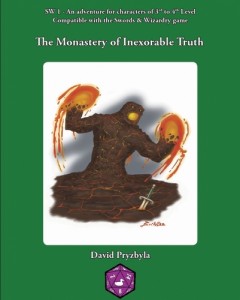 It is said that the truth will set you free… but is that, itself, the truth? The monks of the Order of Veracity built an amazing monastery complex in the frozen mountains, using the heat of natural magma flows, in order to contemplate the truths of their stern god, Ket the Unbroken. When they were given a wondrous tome, the Codex of Inexorable Truth, they thought that all of the truths in the world would be theirs to behold… and it would be a lie to say that their bones rest easily because of it. But the truth can be a valuable thing, and your party of intrepid adventurers has been tasked with obtaining the truth borne in the pages of the Codex, and must journey to the dark halls of frost and fire- to learn the Truth.

This adventure was a pleasant, if a bit hackey, surprise. It takes please in an abandoned monestary and exists more as a locale to quest to than as a plot to uncover or an Evil bad Guy to defeat. There’s a nice little artifact that’s present in the dungeon that can serve as an excellent adventure hook. Basically, the monks god rewarded their devotion with a book that contained the Inexorable truth. Ask a question and get an answer. And then get a second answer … the consequences of the first. The monks couldn’t hand the truth and ended up killing each other, and then they got punished by their god. Their god who, because he’s kind of a dick, finds it interesting to watch how the puny humans react to The Truth. I found this a really excellent backstory and hook. Best of all it’s all presented in less than two pages. A brief little history and backstory, the details of the god and the book, hooks and all the rest. There are a couple of other bullshit hooks as well, the usual sort of lame “hired by someone” and “great evil blah blah blah” stuff. But the core hook: Book of all Knowledge, is a VERY good one. It motivates the PLAYERS, rather than the characters, and those hooks are always the very best ones. Want the keyword for the Sword of Kas? Guess which monastery you are going to!

The map has thirty or so encounters on it and is done by Dyson Logos. I’m not the rabid Logos fan that others are, and this map is a good example why. In spire of this being a monastery set amid a lava lake, it’s boring It is, essentially, just a loop with the two hallways running directly in to rooms and then meeting on the other side of the map. Oh, there’s a side room here and there, as well as smaller loop, but not in a meaningful way. This is, far too often, a problem with Logos maps. Logos generally has a good idea or two but the maps tend to peter out after that idea and become small uninteresting affairs. If you strung all of the good ideas together you might get something good. It seems like there’s just something that hasn’t clicked yet with Logos. There’s another problem with the map, but I suspect it’s not Logos. The various rooms each note the doors as open or closed, the lighting, and the temperature. This is a waste. These sorts of things should be noted on the maps. The door is locked. The door is unlocked. The room is lit. The room is dark. The room is lit by magma from the hallway. The room is very hot. All of this should be shown on the map instead of taking up valuable space in the text. I know, I know, it seems like I’m backseat designing, but, I think not. This is critical information and just as relevant as how many exits there are and how big the room is. It should be shown on the map. The map is a reference document. That information is reference data. Represent it on the page that shows us reference data! There are four wandering monsters, all new, and all just presented as normal monsters. Eh. Nice to see new stuff but nicer to see them doing something. A few extra details in the wanderers activities could have pushed things over the top.

The encounters here are generally quite good and presented in an interesting format. Let’s cover the format first. Each room starts with a small bit of read-aloud. A SMALL bit of read aloud. No more than two sentences. I’m not opposed to read aloud, jus the excessive read aloud present in most products. This one gets things close to right. Here’s an example from the first encounter:
Monastery Entrance. An archway carved from the mountain rock frames an open doorway. Blown snow forms drifts that extend a few feet into the corridor.
What follows is then a bolded section that describes what’s unusual. In the above example there is a small subheading that describes the archway, the door, a lever inside the door, and what’s in the snow drift. Note how all of that is alluded to in the read aloud text. If someone examines something that you JUST told them about then they get a little bit of extra data. When the adventure is at its best it is focusing VERY tightly on the interesting aspects of the room. It GENERALLY succeeds more than it fails. Sometimes it drifts off in to the irrelevant, describing things that don’t matter. Sometimes the read aloud doesn’t mention something critical in the room which should be obvious to a casual observer at first glance. “There’s s shit ton of ice spiders” or “there are several pillars and pedestals with glowing markings on them.” Then sometimes it drifts in to describing something like a bench which has no purpose. While inconsistent and the format is a little wordy and, as mentioned before, notes far too often things which should be noted on the map, which only contributes to the wordiness. This ends us causing the product to only contain about four or five encounters per page. The format here is interesting, but we’re not buying the product for an interesting format.

There are, however, more than a few things going on in each room and the data presented is generally in line with supporting party interaction with the environment. For example, those snowdrifts mentioned in the first encounter have the body of a dead adventurer in them. His short sword is coated in blood, his body rent with claws, and his face blistered from heat. Interesting! The party now has numerous clues to one of the new monsters in the adventure. Yeah! The dude also has a gem in his shoe, rewarding those players who taker the time to interact with their environment. Other rooms have other clues to other new monsters, or to other clues to other things in the dungeon. That’s EXCELLENT design. The overall impression though is that the rooms are on the Hack side of the line. There’s not going to be a lot of negotiation with the vermin or the undead, and thus the faction play is sorely lacking … a problem with most adventures that feature undead. I noted ‘interaction with the environment’, above, but I’d like to back off of that a bit. While there are a lot of clues to what’s going on, giving inquisitive players a leg up, the interactivity, proper, is lacking a bit. There’s not a lot of ‘weird’ going on, or things you can impact, other than hacking them. The connected nature of the rooms is strange. On the one hand you’ve got lots of clues as to what might be in the next room, but there’s just not a lot of interactivity beyond that. The clues here are excellent, some of the best I’ve ever seen, but the interactivity (beyond hacking) is lacking. I don’t know if I’m making myself clear.

I’ve mentioned previously the new monsters. There are five or so, and few other monsters outside of these new ones. I REALLY like new monsters. I like a party that is afraid of the creatures they meet. They don’t know the special attacks or defenses or anything else . The creatures here are interesting and reverent to the environment, and have some decent descriptions. “They exude a powerful odor of charred flesh.” … Cool! The treasure is less great. There are some interesting treasures, like a desk or so, but there is far too much that is generic. “3500gp in misc jewelry” “a jade idol”. A jade idol of what? Just two more words and that had idol could have been a really special treasure. Instead it’s just generic junk. The magic items are similar. One or two get a description, like a handle that returns and is decorated with gold and red. But others are just generic +1 mace and “potion of levitation.” One or two more words, a little extra work, and the standard book item garbage could have been turned in to something special. 🙁

Origins was a bust, with only 1 OSR adventure, so I bought a lot of Purple Duck stuff during their recent sale. I was dreading the reviews, but, now, I’m cautiously optimistic about them. Let’s hope the other LL and DCC adventures from them are as good as this. Not the greatest adventure , but a solid C+ or B- in my opinion, which means it better than the vast vast majority of stuff published.

Hey, did you make it this far? I’m having a party in a few weeks to celebrate the return of D&D. If you’re in/near Indy drop me a line and I’ll send you the invite. And if you’re not in Indy but have 4e books you want to get rid of then let me know. I’m gonna kill 4e with fire.

3 Responses to The Monastery of Inexorable Truth