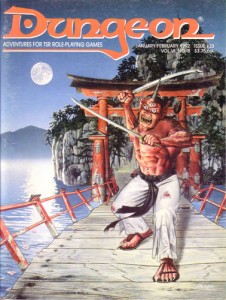 Origins didn’t have shit in the way of adventures, so I bought a bunch on DriveThru this morning. New content soon!

This is an adventure on a deserted island full of castaways who need some help solving an ogre problem. The party ends up wrecked here and the other castaways, from pervious wrecks, attempt to convince the party to go take care of some ogres who are preventing their ship construction efforts. When the party goes to do that, they get charmed by a morkoth and his marid buddy. Oh my god, I love this adventure. The hook is complete BS. From the seedy tavern with the confused barkeep to the railroad to get the ship to crash to the isle, the beginning is BAD. So bad I wonder if it’s intentional. I LOVE the crazy barkeep and bar, only briefly described, even though its a total set up. The journey to the island is lame as it ends in a shipwreck, but, shit, whatever, it gets the party to the isle. Once there they meet a CRAZY band of castaways, whose rough village is plagued by nearby ogres. Their story holds us to no examination. Their ogre defense barrier is a falling down bamboo affair with a gate that takes a STR 15 to push down. Their water source literally springs from out of nowhere. One guys been on the island for years, living in the same hut, only the hut is less than a month old. More and more of hat sort of thing, with the castaways giving the stupidest answers known to man. It’s a complete telegraph that something else is going on AND I LOVE IT. Screaming THIS IS a SET UP at the players and then watching them walk in to it anyway is one of my greatest joys as a DM. There are a couple of potential allies on the island, from an ogre (!) to a rebel elf. Everything kind of centers on a cave with a spiral entrance … a morkoth lair. The marid is a little inexplicable addition. It’s used to do weird stuff and be an agent for the morkoth on the outside but it seems out of place. Something has to keep up appearances, so the designer stuck in a marid. The writing seems tighter than usual for a Dungeon Magazine adventure and it’s good to see something unusual like a morkoth show up. It’s all book treasure, and the adventure is on the short side, but I liked it. In fact, the Moonday Murder Hobos are just setting off to take a sea journey tonight. I might have an island offshore have some smoke coming from it … This is a stupid silly little adventure, and I inexplicably love it. Wasn’t there some crappy bar from a Forgotten Realms document, the Swill & Swipe, or something like that? It served bar rag drinks or something like that. That bar would be perfect. Obviously, I’m excited, and that rarely happens.

This is a sandbox siege, with the PC’s defending a fort. It really quite different than the usual affair in Dungeon. The party ends up in a fort/manor and a large group of orcs attack and lay siege to it. The party gets to control all of the locals, from lord to peasant, and has access top all of the general supplies in the fort in order to fight off the attackers. There’s a timeline presented, some rough orc battle plans, and general plans of the fort and the surrounding lands. There are some battle system rules attached, but they are entirely optional. I like these sorts of “heres a location and heres a goal. Make it happen” kinds of adventures. The players are given a very free hand, controlling all of the NPC’s. Success probably depends on making raids out of the fort and destroying the orcs siege equipment, etc. The general overview map could be more useful for play if it had more features. It is basically a fort on a hill surrounded by trees. Given the (probable) frequency of sally raids a more detailed environment would have been better. Every party should have an opportunity for one of these once in their careers and this one may be nearly as good as the Dogs of War/I series from C&C. A little prep work in maps, character stat cards, etc, could turn this in a VERY memorable game for your party.

A miserable adventure in an annoying cutesy halfling village with no reward to speak of. An invisible dragon has been granting them wishes while pretending to be a well spirit. While he’s away some men locks move in to the well and there are disappearances. All of the halflings are incompetent, grossly cute, and as far as I can tell there is absolutely no reason for a party to do anything other than burn the place down. No, that’s too harsh. Parts of this are interesting. The local lore about the well spirit liking apple pies, and the menlock lair is full of belly-crawling tunnels that force you to fight with a dagger … while they circle around behind you. That makes the lair sounds more awesome than it is. I really do enjoy the non-standard environment of the dirt-floor tunnel belly crawl, but it’s really just a side-view map showing some tunnels with one big dug out area. It’ unclear why I like the stupid villages in the first adventure and loathe the stupid/cute ones in this one. In any event, this could make a nice one-shot with a deceptively hard finish to it. Kick around the village for a bit, putting up with the cute halflings, experience a raid at night and/or search the well, then belly-crawl to the enemy. 13 pages is WAYYYY too much for the adventure though. That, however, seems to be a fact of life if you want to use one of these older adventures.

This must be a side-trek, since it’s only four pages long. A unicorn has been poisoned and some goblins are hunting it. The wilderness/glade has five encounters, the first being the hook combat and the last being the poisoned unicorn. There’s a camped out gnoll and a couple of flying kobolds. That’s it. It’s clearly a Legend rip, with goblins, unicorns, horns, and poisoned arrows. There’s just not enough to this. Nothing interesting happens in it AT ALL. Even the gnoll just attacks on sight.

The Dungeon Magazine Oriental Adventures have been some of the strongest in the magazine, but this is one of the weaker ones. An evil spirit is killing the village elders, one after another. You have one day before the current one dies to go to an island where a villager was banished years ago and get the curse removed. There are a couple of OA style encounters in the wilderness and then on to the small island, home to many small shrines and a temple with a major treasure in it. This is a major adventure, clocking in at about 20 pages. It’s strongest when playing to the OA/fairy tale vibe and weakest when being a traditional D&D adventure. For example, on the wilderness trail you see a hanged man and his spirit next to the body. If you let him possess you and complete his task (which is quite minor) the spirit is put to rest. Great! Nicely done with a sweet fairy tale vibe in the flavor text used! But then there’s a tasloi village. That takes up a couple of encounters and several pages and feels more like a traditional hack & slash D&D adventure than an OA adventure. It’s out of place. The lengthy description of the village implies a hack fest, but the best option Is probably just to run/sneak through it. That’s followed by a straight-up fight with an Oni on a bridge (from the cover) but that also feels out of place. Most OA Dungeon adventures have treated the creatures like real NPCs, with goals and motivations of their own. In fact, the OA adventures have tended to do that FAR more often and FAR better than the ‘regular’ adventures. But, again, in this encounter the Oni is just there to be killed. The shrine/temple island has a couple of good OA encounters, from a collapsing cliffside to an area infested with leeches and some shrines to be cleaned up. But those are mixed in with a couple of straight-up fights that detract from the … ethereal? Nature of the isle could have otherwise had. The main temple extends this clash. While a couple of the encounters COULD be good, with an opportunity for interaction and choices by the PC’s, instead they all end with “and it attacks.” This gives the party no options beyond hacking things, which may be the most boring option in D&D. Given the emphasis on honor and so on in OA I find the lack of non-violent options strange and out of place. I guess there’s a puzzle or two on the island, or an opportunity for smart play here and there, but they are far outnumbered by the raw combats. In the end I found this to not have a strong OA feel, in spite of the trappings.