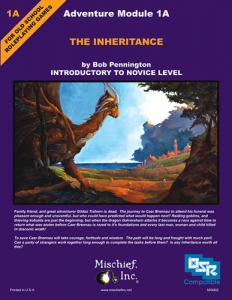 Family friend, and great adventurer Gildas Trahern is dead. The journey to Caer Brennau to attend his funeral was pleasant enough and uneventful, but who could have predicted what would happen next? Raiding goblins, and thieving kobolds are just the beginning, but when the dragon Galversharn attacks it becomes a race against time to return what was stolen before Caer Brennau is razed to its foundations and every last man, woman and child killed in draconic wrath! To save Caer Brennau will take courage, fortitude and wisdom. The path will be long and fraught with much peril. Can a party of strangers work together long enough to complete the tasks before them? Is any inheritance worth all this?

Someone has stolen a dragons egg. You are charged with going to get it back. You talk to some townsfolk and assault two (boring/standard) humanoid lairs. You are also led around by the nose and forced to go from place to place and shoe-horned in to an adventure that has far more in common with the 3e/4e era than it does with more classic/open-ended product. This is a frustrating thing to review. It’s an OSR product. I know because there’s a label right there on the front cover that says “OSR.” It does some things right, like putting in some magic items with a few unique abilities. It MIGHT even have a non-standard monster or two, depending on if you call a kobold sorcerer nonstandard. It also railroads you, leads you around by the nose, includes copies boxed text and has lots of generic magic items, linear dungeon design, boring rooms, NOT ENOUGH TREASURE and a vibe and vocabulary that is much more aligned to the 3e/4e era. I’m not gonna say it’s a conversion, but it FEELS like one. This ISN’T a rip-off adventure, like many of the conversion products are. The designer clearly put some effort in to it. It just doesn’t click and hit the notes an OSR adventure should. Yeah, that’s right, I’m the arbiter of what makes an OSR adventure OSR. Because it’s my review. In the end this is Just Another Adventure, with nothing special to recommend it.

I want to start here with the hook and plot. The entire thing is CRAMMED down the players throat and then they are led about from A to B to C. You’re in a manor home getting your inheritance from a dead wizard when The Authorities walk in and try and arrest you. It’s done in a a very condescending (to the players) “Respect my Authoritay!” kind of manner which, I believe, every player on the face of the planet LOATHES. You are not put in the position of kissing ass. That’s the first act your character takes, kissing ass and licking boots. You HAVE to do it, or you are derailing the railroad. So, as player, do you accept this? You know that’s the way the adventure is but fuck that asshole for making you boot lick as your first act with your character. My players would NOT put up with it. If I were playing I’d choose stabbing the Authority in the throat. It’s the OSR, I’m going to die about 4 times anyway before someone makes it to third level, so what does my nameless/soulless dude have to loose? Not kissing ass? I’ll take it. There’s two NPC’s, one on each side, so there’s a lot of DM going back and forth going on with the characters ALMOST on the sidelines, their fate in the DM’s hands as he rolls d20’s for both sides. Not. Cool. And then there’s the whole “they try to take you prisoner and heal you if you resist” nonsense, since all this crap is just the fucking hook for the adventure and has almost no impact on things. This drives me CRAZY. Your actions have almost no repercussions. Kill the dude, don’t kill the dude, resist, be nice, whatever. You end up in front of the local lord where there is more groveling and boot licking expected. He either puts you in the dungeon or gives you a place to sleep. In either case a dragon attacks in the morning at which time you are released (from jail, the barracks, the dungeon) and forced to confront it. NOTHING you did had ANY impact on the events. That don’t sound like what I know the OSR play style to be. This goes on, with the party being led from place to place to follow the plot to the fort, town, lair 1, lair 2. Contrast this to Scourge of the Demon Wolf. In that adventure the locations were presented as separate and distinct places with relationships to each other, where you could learn about the other locations and rumors and so on. You might think this trivial but I think the distinction is critical. Does this place exist outside the players interactions with it (Demon Wolf) or is it just sitting around waiting for the rumor in site #2 so you can travel to site #3? Major portions of this play out like a movie instead of a Realm of Possibilities. This is perhaps best exemplified by the dragon attack that the players are forced out to deal with (after being treated like shit by everyone.) The dragon gets an entire page write up, but at AC –6 and 112 HP there is no possibility for anything to happen here. It’s just a movie where the dragon roars and prances about and the players force their characters to do what’s expected of them to move the adventure along.

Moving on to the actual encounters, things seem … generic? It’s a guardroom. It’s got some dudes in it. It’s a barracks. It’s got some dudes in it. It’s a storeroom. It’s got some storeroom stuff in it. There’s just not much to the encounters. A couple of the rooms have traps, but this feels much more like a tactical exercise than exploring a real place. I guess there’s nothing wrong with that, especially if the adventure is tactical. But OSR characters tend to be weak and not suited for tactical play at level 1. In most version you are barely more competent than goblins & kobolds, which make up the bulk of the enemies in this adventure. Further, they have some kick ass AC’s and HP’s. But de-emphasizing the exploration element and emphasizing the tactical, in a low-level adventure, you are forcing the group in to a no-win situation. They don’t have the opportunity for those whacky Adventuring Party Plans because everything is just one combat after another. The rooms are fully described … to no effect. Instead of the descriptions focusing on what the party can do and interact with, ACTIONS, then instead focus on trivia. “This is made possible by small bearings in the base” or “the runes on the walls tell of the three people who were buried here, now looted and gone, and have no bearing on the adventure.” Then what’s the point in telling me about it? Because it’s “Realistic?” Seriously? My elf is farting fireballs and you’re focusing on realism? Rooms & encounters need to focus on what’s important to the PLAY and ACTION. Boiling kettles to use in combat. Weird pools to do stuff with and the like. The goal of the designer is to provide that sort of thing to the DM to assist them in running a GREAT game for the players. If all you’re describing is the mundane and normal and you can replace the goblins for bandits, then what’s the point? Why not play Harn? I want to back off just a little from that diatribe to note an exception. There’s a wilderness area outside the first monster lair. Big chasm, a couple of guardhouses/ruins, one good bridge and one broken, an old monastery back in a cliffside overlooking everything (the main lair.) This is pretty nice. What you’ve got here are LOTS of possibilities for assaulting, sneaking, crazy plans, monsters reacting, varying terrain types, etc. There’s a WIDE open list of opportunities for the players to have their characters utilize. The goblins who live here are mostly presented as fodder instead of something more interesting although, eventually, a parlay may be obtained for play more interesting than hacking down goblins. I was MUCH more impressed by this section than the railroad before it or the “epic” plot/railroad after it in the second lair, and it’’s all because of the open-ended nature.

Let’s talk treasure. The adventure starts with the characters each getting a magic item as part of the inheritance. Something generic, like a +1 sword, but then with JUST a little extra, like, oh, allows you to use a cure light once a day, or something like that. Each also generally has a nice little backstory to go along with It. I generally prefer my magic items even more non-standard than the ones listed, but big props for adding the extra flair to each. This happens at least twice more in the adventure, including one opportunity in which the party is rewarded for exploring. And then there’s the rest. +1 shield. +1 sword. +1 arrows. BLECH. Just generic book items without souls. It’s magic. It’s supposed to be weird and whimsical, full of wonder! +1 sword. Uh … there’s a disconnect somewhere. Then there’s the coinage. I didn’t add up all the loot, but it seems light to me. VERY light. Coins=XP in most OSR games. The loot is worth more than hacking, which is why “grab the loot” is more important than “be a hero.” The risk/reward ration seems WAY off in this thing.

Finally, let me note that the second humanoid lair map is TERRIBLE. It’s just linear. Ok, two lines. You go down the halls/rooms in door 1 or the halls/rooms in door 2. This is not a style that jives with the low-powered characters of the OSR. You need room to maneuver. Ambush and be ambushed. Head em off at the pass. Hide in the cracks. Sneak around. All this does it force you in to one encounter after another. There’s is a nice order of battle, for both monster lairs, which I always love to see, but it’s anemic here. Oh boy, more monsters in front of us. While on this lets’ talk about the Forms Being Obeyed. Obligatory introduction is present. Obligatory “describe the monster stats” is present, in spades. Obligatory “convert this to your games stats” is present, in multiple places, too many times. Also present: Obligatory Trade Dress. There’s supposed to be an epic kind of feel to this, but the creatures in the lairs are not telegraphed enough for it. You need some foreshadowing, some hints, that what is coming up is scary. Otherwise the Kobold Sorcerer, and his nefarious plans, are just another Lareth. And just another Lareth is what they are in this adventure.

10 Responses to 1A – The Inheritance