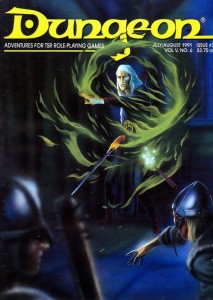 Fucking. Sewers. I LOATHE sewers. Actually, I just recently reviewed a 1-pager in sewers that was good. This ain’t that. This is the sort of the adventure that makes you think: Fucking. Sewers. Dinosaurs eggs fell in to the sewers from a magic shop and hatched. They ate some sewer workers. There’s a bounty for bringing them back, dead or alive. it’s not much; I’d recommend you go find something fun to do instead that pays better, like interviewing to be an assistant crack whore trainee. This has a big map of the sewers, done in line style with no detail, and three pre-set encounters. The idea is that you wander around down here FOR MONTHS until you find all the dinos. Doesn’t that sound like fun? Wandering around for months? Yes? No. The 20-entry wandering table is just a list of monsters with stats. Nothing more. Rot Grubs. Common Rats. Giant Rats. Razors so you can slit your own throats to make it end. No, sorry, just kidding about that last one. There’s once good mechanic here and that’s that the dinos grow and the longer it takes the bigger they get. Other than that …. MONTHS in the sewers, drawn as a line map, with 20 boring old book-standard monsters listed as wanderers, and 3 pre-sets? No Thank You.

Elminster’s Back Door
By Ed Greenwood
AD&D
Any Level

This is an Ed Greenwood adventure. Ed, and sometime Jim Ward, like adventures where you can be of any level. That means PLAYER skill, not character skill, determines the outcomes. That’s very nice, in theory. In practice though Ed has created one of the most boring adventures ever. Your best best is … not do anything. Seriously, just stand there, walk around, search without touching anything. You Win! This is, as the title suggests, the backdoor to Eliminsters Tower. If you are a nice guy and mean him well you make it through ok. If you are a greedy dick you die. That makes sense. It’s also BORING. GO in a room. See something creepy/cool/interesting. Ignore it and go in the next room. It’s like you’re stuck in a cab touring London all day on the highway. “Look kids! Big Ben! Parliament!” and then on to the next sight. The interesting shit is VERY nice. A bunch of eyes floating on the ceiling, or blue hands reaching out of walls holding magic items and supplies. Very cool. Now, ignore it and move on. It’s like its the ultimate temptation. Is temptation good? Absolutely! I LOVE to put friendly/neutral monsters in my adventure, who are more than willing to talk to the players. And then I let them wear a 10,000 go platinum crown and make then turn their backs a lot. Temptation is great! But it has to be spread around. Room after room after room of the same thing is BORING. All you’re allowed to do is look at it and not touch. If you touch then Something Bad Happens. Iron golem kills you. Stone Golem kills you. Whatever. The effects are cooler than Tower of the Stargazer, but the interactivity is just not present at all.

A trip to free a prisoner help in a wasteland fortress by some nomads. “Some of the role-playing in this adventure hinges on the character’ views on sex roles. If the character group is largely male, this could be fairly entertaining.” Uh … As far I can tell, this refers to the country you are in, for about 5 minutes, being ruled by a Queen instead of a King. Once you get the mission from her this strong warning doesn’t seem to apply anymore. I know nostalgia is rosy but I have a hard time believing this was thing back in 1991. Anyway, too much backstory revels that nomads have captured a diplomat and you need to do a prison break. You make it past an ambush, break in, free the prisoner and run. It’s more than a little bland. There are things here that I like, a lot. Most of the guards are F1’s and there’s not a lot of bullshit “they always” this or “permanent anti-magic” that. It’s just a place, with guards, that you break in to. A Caper! Except … it’s not written that way. We need schedules! Patrol routes! How the dudes inside react when the alarm is raised! An order of battle! When do they release the Death Dogs to roam the halls? None of that is here. Instead, it’s boring room after boring room with too much description tell us what the room was once used for, or how its not being used right now, or yet another explanation of how the jailer is not a nice guy. That. Doesn’t. Support. Play. I’m also more than a little tired of seeing “the guards fight to the death.” This time the lame ass excuse is that its a cultural thing, and how they show their manliness. Take a cue from Ramses 2 boys: march back in town and say you won. There might be one more interesting thing here, and the adventure calls it out explicitly. There are a lot of prisoners/slaves in this fortress. You’re after one. You can escape with one (the place is hard to sneak in/out of, which is cool.) What about everyone else? Leave them chained? Free them, knowing they will probably be torn apart by the guards and their guard dogs? Quick note: Spartacus didn’t turn out too well for that slave army.

A Wrastle with Bertrum
By Willie Walsh
AD&D
Levels 2+

This is a little bar brawl, that complete complete with an insert for floor plans and cardboard stand figures. It’s also ALMOST too good to use the way the designer intends. There’s this seedy bar. It hosts wrestling matches. The champion is the bouncer, who’s also a half-troll. The prize is something like 2k in gold. You’ve got the bar owner, the bouncer, normal peasant scum, other wrestlers, and then three groups who want to STEAL the prize. Dwarven bandits infiltrating the crowd. A group of halfling bandits who raid the place, CLAIMING to be the feared dwarves bandits. (Nice on!) And finally, a wizard who needs to cash. All hell then breaks loose. This is written as a bar room brawl, a one shot. And I guess it works for that. There’s just SO much more you do with this place. A little extra detail on the NPC’s and you would have had a legendary tavern location! But that’s not what the designer was setting out to do. But if he’d done it … but he didn’t, and didn’t want to … but if he did! So, this works, although there’s WAY too much text for the content.

Uh …. This is an adventure. I mean … Uh … Wow! Dungeon Magazine actually published an adventure! This thing could almost be a completely stand-along product. Look, I’m about to talk smack about this, because it deserves it, but at the core of this is Something Good. You need to decide if its worth salvaging. I think it is. In fact, I don’t even think the salvage job is that severe. I would suggest, however, that you work this adventure n. You need to start dropping hints LONG before the players hit this thing. The College, the legends, etc. This is going to work best when it’s NOT dropped in out of the blue.

The backstory here is LONG. I mean REALLY long. You know the Unseen University, in Discworld? There’s a magi college with that kind of vibe. There’s a kind of power struggle and one of the magi, to be a dick, exercises his Right of Inventory. One every hundred years he can force an Grand Inventrory to be done, which everyone hates because it’s a pain in the ass. In it, they find a magic shield with something unusual about it, which leads then to hire adventurers. That’s backstory one. Backstory two is about the guy who owned the shield. Backstory three is about the guy who the guy that owned the shield was trying to find. Way WAY too much backstory … but … more than enough also for you to slip in to your campaign, and, overtime, build these three places/people up. It would be like Obama, Putin, and Thatcher showed up one day, told you the illuminate were real, they were in it, King Arthur was real (like, not some pict/roman dude, but like really real, all the legends are real!), as was excalibur, and, oh yeah, we think we know where he’s buried. Could you go check it out? Yeah, you can keep the sword. Holy Shit!

There’s a valley adventure that’s … Good! Giant sheep on the hillsides! A misty steamy valley with a river in it! Stone Giants … who are not dicks! They talk to you! Hey have a captured bard playing music for them! You move on, to the dungeon, on a raft. And then something really cool happens. There’s this concept in the OSR of the dungeon as the Mythic Underworld. An important part of this is that the entrance MUST be significant. Or, maybe, that it has to feel like crossing the threshold is significant. This does that. You’re poling your raft down this river, across a lake and discover … a large stone arch that the water flows through. This is it. This is the place you’re looking for. As is so often the case, my own words can’t describe the brilliant SIMPLE imagery that is conveyed. But it works. You are not in the realm of THE OTHER. You pole around, find some signs that others are here, and then get TOTALLY fucked over by the king of the mushrooms. Who isn’t. I usually don’t care about spoilers, but this time I’ll be nice. There’s a hole intelligent set up here when you meet the mushroom king that leads to some great roleplaying. It’s social, or can be. And I LOVE it. You move on to find an eternal warrior you can put to rest. And then on to a HIGE steamy jungle cavern. And then on to a tower. It’s like it never stops! And there’s are NPC’s hanging around! REAL people with real problems and real emotions and they are wonderful and they are dicks and are complex but you can grasp them easily and run them well.

You know Dungeon published a couple of adventures with that stupid red dragon, Scorch of whatever he was called. They were supposed to be EPIC and Might and Majestic. They tried too hard and they sucked. This one though, this one FEELS epic. You feel immersed in it and you feel like something awesome is going on and that you’re a part of it and most importantly that you are DOING things and making a difference. I can’t recall, just now, another adventure that has given me this EPIC level feel. Ever.

You’re gonna need to take a read-though this before you run it, but I don’t think you’ll need to do much more to run it. For all of it’s text and wordiness, as was the style at the time, the ideas cement themselves in to your head. Dave Bowman write a wordy encounter with an old hill giant who likes to eat crab legs. Old Bae. It was quite long, for Bowman. The core of what it is is still fresh in my mind as if I had just read it. This adventure is like that one encounter: it stays with you. I think that’s pretty much the definition of Well Written.