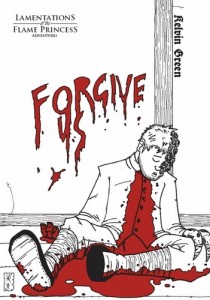 1625 was a plague year in Norwich. History tells us that it was an outbreak of the Black Death. History is wrong.

This is a collection of three adventures, or, rather, one adventure and two expanded summaries. The core adventure is clearly some kind of homage to The Thing. A gang of thieves has unearthed something, The Thing ravages them, and now their hideout complex is, well,MOSTLY empty. As these things go it’s not bad, per se, but it’s not exactly a classic either. It needs a good edit and could probably be pared down to a one-page adventure. In that format, with a price to match, it would be a good value. As is … It’s too long for it’s good, and a lot feels more like filler and paying tribute to the required forms, more than inspiring adventure.

The hooks here are very lightweight, and even that description may be overstating things. There are just a couple of sentences and are all some derivation of “the characters stumble across what’s going on.” Your friend Bob works in one of the stores. Or your hired to go get a letter back. Or you are raiding the treasure vaults of the gang. There’s really not much at all offered here. Slightly more detail on a decent pretext would have been welcome. As it is, the hideout is presented a little out of time. When the characters get there “the event” just happened and the characters are left to investigate. As in Death Love Doom, the horror event awaits for the players to discover and deal with.

A certain gang of thieves/mob boss has a hideout in a section of town that is comprised of an entire city block. All of the buildings on all sides are mobbed up in one way or another and there’s central courtyard in the middle of all of them. The businesses in the buildings serve as a front for the gang, who’s main headquarters is there in the block. There’s a complex series or locked doors, ladders to other buildings, and keys found in various buildings that turn the map in to a kind of puzzle more than map. “How can we get in to building X?” and so on. The maps here are not the best in helping to describe this sort of situation. The main overview map shows the various buildings relationship to each other, but are not labeled, just keyed with a big A, B, C, D, and so on. Each building then has a smaller map that shows in the interior detail and some interconnections to the other maps. “Go through this door to reach The Dog & Bastard (page 9)” and so on. By keying the overview map, instead of placing additional data on it, the way the entire place fits together is left more than a little confusing. Further, the interior maps don’t really offer a lot in terms of usability. They have details, tables, knives on the tables, and so on, but that doesn’t really add anything to the adventure, particularly for the space they take up. They don’t contribute much, and EVERYTHING should contribute to inspire the DM. While it’s close at hand, let me go on a short little diatribe. YOUR FUCKING FONTS SUCK! I’m not a font snob. Far from it. I usually don’t give a flying fuck about fonts, spacing, kerning, or whatever else geekery goes in to font selection. But when I can’t read your fucking font then there’s a fucking problem. Guess who’s fonts are hard to read? Some jackass decided that the overview map would be keyed in some archaic cursive/gothic/unreadable font style. So the big ‘f’ over a certain building might be an f. Or it might be something the fuck else. You can’t read the fucking things. Notably, this is the ONLY place they did this. Just use a plain old fucking font. You’re supposed to be helping me run an adventure not making me confused about which room is which. Better yet, just write the fucking name on the building in a font that’s readable! Then I don’t even have to go refer back to a fucking key!

The encounters, and interesting content, are few and far between. There’s some dogs in the courtyard, a lynched guy, a guy who slit his own throat,and a thing dog-monster. Another NPC party may/will wander by as well. Other than that the search is on for keys and entrances to other buildings. It’s really a quite disappointing amount of interesting content for 33-ish pages. Like the keying of the map, I think sometimes designers get caught up in the form, instead of the function. OSR things have keys, so I must key this. OSR things have maps, or keyed rooms, or whatever, so I must do Y … even when Y doesn’t really contribute to the adventure, or something else could have done a better job. There is an exception here, and that’s in the final encounter. The gangs main treasure vaults, which you have to find the keys to enter, is FULL of loot! And about 20 thing-monsters! The idea is the players break in, see the loot, start to fill their pockets, and THEN the monsters emerge from the shadows and begin to attack. You get a nice Press Your Luck type mechanic here. Wanna grab more loot? Then you open yourself up to more attacks! And … are your fellows who have already fled gonna lock you up inside with the horrors, to keep them from escaping. That’s a nice little bit and encourages the kind of zany RPG antics that come out in play. Perhaps the only thing that’s not obvious is if the players can even open the vault at all and how it is re-sealed. There’s a magic word to get in and, although I searched several times, I couldn’t find it mentioned in any of the encounters for the players to find. Once opened the players will want to seal it up again and it wasn’t really clear what Kelvin intended. Should they be able to seal them up again or not? It doesn’t really matter, DM’s gonna do what a DM’s gonna do, but it’s probably important enough that the designer should have noted it.

The treasure vaults are the core of the adventure treasure and involve a nice little mechanic and detail. You grab something from a table (while the monsters are attacking!) and roll a d20 to see what you get. Each has little picture by its entry and a small sentence of detail. The core of this is good, and the pictures great, but it could have used just a little more. “A silver crown worth 100gp” would have been “The silver crown of the current Lord-mayor, worth 100gp,” Or, instead of just mentioning a treasure map throw in some extra couple of words. As I mentioned above, everything in the adventure should contribute and inspire … and that includes the treasure. A flew extra words is not spoon-feeding and is not a wall of text. It’s inspiring the DM to go and do great things on their own with what you’ve provided.

The other two adventures are more brief settings than full blown adventures. One is right out of a Twilight Zone episode (who wants to go to the cornfield!) and has a great ghostly encounter setup. The few pages it takes to describe the thing is ABOUT how long I feel the core adventure could have been. The second is more of an outline regarding tax collectors and a funeral.

3 Responses to Forgive Us