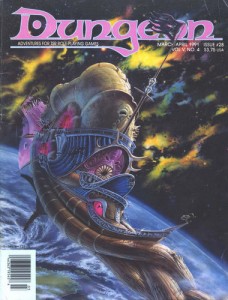 Also, Steve Stolph, from Medina Ohio, wants to know why an NPC Druid in a previous Dungeon adventure has a spell that is not on the list of allowed Druid spells. Published adventures set an example for people and for many will be how they learn to play. OD&D NPC wizards shot lazer beams from their nipples and summoned blue cloud of sparkly shrinking dust. Rules are for players. Judges judge.

Sometimes I want to retire from my job and make a career of rewriting these adventures to make them actually useful. This issue shows hope. Photocopy or cut/paste would do wonders for several of the adventures herein.

This little railroad is composed of 7 encounters, all in a row, squeezed in between two Battlesystem battles. Evil Iggy has a little mashed-up evil army composed of a dozen different creature types and is attacking the little Hamlet of Pigstye. The party is recruited to help and lead the good guys army. The first day they loose, badly, because a lich employed by Evil Iggy has some magic bagpipes. That night the bagpipes are stolen by from Korred. The party is sent in to get the pipes so they can’t be used again. You then suffer through 5 unavoidable and boring fights (werewolves, trolls, owl bears, dragon, manticore) before some elves lead to the Korrad. There they laugh at you while fucking with you. Evil heroes attack, you defeat them, and are given the pipes as a reward. On the next days battle the party has a better chance thanks to the artifact not being in Evil Iggy’s army.

This thing rubs me raw on so many levels. The first Battlesystem battle is irrelevant; it’s just a plot hook to show off the pipes. The mashed-up army of ogres, orcs, loch, drow, fire giant, humans, demons is something I have ALWAYS hated. You have to stretch pretty far to come up with a backstory to make it all work. The railroaded encounters in the woods are just there to drain resources. They are not interesting at all and offer little more then “they attack.” Then of course the Korrad and their arrogance/laughter at the party. That’s right, I enjoy having my 10th level PC laughed at because of some DM bullshit. And of course, they are actually good guys because they fight to capture instead of kill. “Why do you interrupt our dancing?” Because you, Mr Korrad, like all the Kender and Dragonborn and Gnomes before you, deserve death. Oh, and the pipes, of course, can’t be used by the party. Why the hell would you ever want to give something powerful to the party, heaven forbid. Ug. The only positive trait I found here was one of the kneaders of the good army is evil. Something similar was done in Ghosts of Dragonspear Castle and I liked it then as well. The portrayal of competent, evil, and non-phychotic leadership is few & far between in D&D and the game could use more of it.

Two pages describing a straightforward ambush by brigands who use a Hurricane Lamp. You need two pages for that?

This is an exploration/fetch quest inside a keep with about eight levels and fifths rooms. What makes it interesting is … the faction play! There are a ton of NPC’s running around the place and then four OTHER groups show up. You see, the arch-mage that lived here died. Kind of. And he sold his soul to multiple parties in exchange for power. And then he died. But his soul didn’t show up. So the buyers and/or their agents show up in the castle to see what’s up and collect. And his castle is stuffed full of his apprentices and staff. AND the party are lied to to get them in to the adventure. And the Soul Patrols are lied to. We end up with something that FEELS very social but can turn in to an explosion at any moment. The designer gets usability to a large degree. The NPC’s are detailed in a table THAT ALSO NOTES WHERE THEY CAN BE FOUND IN THE KEYED ENTRIES. The Soul Patrols have personalities, as do the apprentices and the castle rooms have a bit of flair to them … some of them anyway. Hell even the hook is good: while passing by at night the party sees a tower of the castle erupt in eldritch green flame and then sees a body hanging from the window. Which then falls to the ground as the party approaches. There’s no way in fucking hell ANYBODY is going to ignore that hook, no matter how jaded the player. And that is the key to a good hook: an appeal to the player rather than the character. My chief complaint would be that too much space is spent describing the mundane portions of the castle. No one needs a paragraph to describe a normal hallway. One of the NPC’s also wears one of those annoying “can’t detect my lie/read my mind” things, in order to launch the adventure. I REALLY hate that kind of thing, and there’s several “can’t passwall and can’t teleport” sorts of things going on with the castle walls, another axe of mine. Lowering the power level would have taken care of that nicely. There’s a lot of crap in Dungeon that is not worth looking at or saving. This is not one of those. At a minimum you could steal the hook, NPC’s, floor plan ,and visitors easily enough, in about 5 minutes, and then maybe spend some time with some quick notes on the castle and you’d have a pretty good adventure. “Ah, yes Sirs, excuse me. A Mr. Demon Prince of Layer 546 is here. He says he has come calling about the soul? Would it be too much trouble for me to ask of you …?”

Doppleganger in an inn. 13 people in the inn and the ganger wants to take the place of one and not kill TOO many of the others. He’s tired of traveling and thinks taking over an inn would be a swell idea, but he needs those employees intact so he doesn’t actually have to work! This is too long for what it is. The NPC’s should be laid out in a table with less emphasis on stats and gear and more on quick personality reference, for use during play by the ref. There is a nice little table of “stupid things the NPC’s say after each murder.” which I think would be VERY helpful during a game. It’s presented as the typical keyed encounter setting but, again, it would have been much better with a very minimally keyed map. A cute trick of using animals to detect the ganger is presented, but otherwise I don’t need an exhaustive list of the contents of a serving girls room in order to run this.

This is … strange. While listed as a Spelljammer adventure it’s really just a plain jane adventure and a couple of Spelljammer ships on the ground that COULD be explored. It takes almost 6 pages of background and (boring) fluff before something happens. The party sees a falling star, follows it, finds a dwarf you tells them his buddies were captured by pirates. The players follow, assault a ship and then go to some mines where the leaders are, along with the dwarf captives. When the adventure is over you get to go to a big dwarf spell jammer base in space and maybe be given a small ship. The layout of the adventure is horrible and it’s far too verbose in most places. We get a list of the pirate crew but then have to fight the text to see where they are located on the ship. Compare to the Sleepless adventure in this issue where it summarized the NPC’s and in the same table told you were they were located. The ship is extensively keyed, but not really to any good effect. It’s got Brown Mold freezers and black pudding garbage disposals ad the like, which I generally find abhor ant. But the mind flayer ‘home canning of brains’ WAS a nice little touch, in the freezer. The patrols of guards and the like were great, as are the siege weaponry on the ship, but the breakdown in the exhaustive detail provided of the interior. The second half of the adventure is in some old mines to free the dwarves. It’s got a nice isometric map and while the encounters are not all that exciting the thee-dimensional nature of the map does a lot to save this portion. It’s combined with a homicidal mage with some fly and invisibility spells and an entire table of suggested tactics for the mage to screw with the party. This is one of the better “hit & run” mage adventures I’ve seen. The environment is varied enough, and the scenario not totally gimpy and set up, that its believable while still having a lot of interesting opportunities. There’s also, notably, a non-standard magic item that is both powerful and cursed … but maybe not enough to make the party throw it away. That sort of Deal with Devil kind of item is exactly the sort of thing that should be in D&D adventures. The artifacts in the 1e DMG were cool because of those small enigmatic backstories AND the cursed nature of the items.