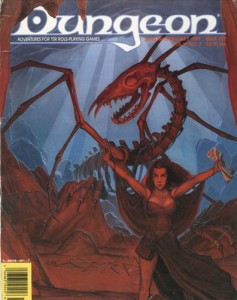 This is a six room tomb with no interesting features. It reminds me of the Demotivater “Perhaps the purpose for your life is to serve as an example to others.” Uh … I don’t even know where to start. There’s more than a FULL page of read-aloud text that is meant to serve as the introduction the adventure. I have no idea at all how or why someone either thought this was a good idea and/or let it get past an edit. Holy man has vision, sends you to tomb of old hero. You can’t kill the L1 holy man. He’s destined for great things. Says so right there in the DM text. Plays no other role in the adventure, but that doesn’t matter. Text says you can’t kill him. You have to walk/ride there, because of the storms. Otherwise your 14th level heroes would be able to skip a completely random and pointless side-trek. There’s this dude you can hire as a guide. During your journey you get attacked by werewolves (Remember, you gotta do a land journey so you can encounter this meaningless drivel.) Dude has a silver weapon and protects your 14th level PC’s from the werewolves. If they start to get away he kills the lead werewolf, then cradles it, overwrought that it’s his sister. If you didn’t pick him up as a guide then he comes charging out of the forest alone to do the same thing, out of nowhere. I’m not opposed to the guide having a werewolf sister, but forcing it down this way is very lame indeed.

Hit the barrows where the old hero is and there’s a Banshee waiting. She’s been talked in to guarding the important barrow by the EHP. Uh huh. There is a decent one-line descriptions of her “she erupts out of the ground with hollowed eyes and a gaping mouth!” I like that kind of description for the monsters instead of a generic “banshee.” When I mention extra flavor that’s the sort of thing I’m talking about. Not paragraph after paragraph but just a little more. Inside the tomb is a … pit vipers, yellow mold, low level undead waiting to be destroyed. (Seriously, what’s the Destory for Undead if you’re level 14? DO 3/4/5HD undead even have a chance? Do 10HD undead have a chance?) There’s more gimp stuff inside, like a padlock that can only be unlocked with a key or wish. No knocks, No picking. Just a key. Guarded by monsters. It’s this kind of forced behavior that I find SUCH a turn off. Why not just let the party use their skills and abilities THAT THEY’VE EARNED to overcome obstacles? Why force them in to a fight … just so you can spring your uber-cool Mujina on them? There’s a beholder that was convinced to guard the tomb and then the EHP and his minions who, of course, finish their summoning ritual just as the party enters .. No matter when they enter. There’s a nice evil book but, as usual, its set up so the party can’t have it and use it. L A M E!

This is introduced as a quick two-page adventure. It’s actually five pages and not really an adventure. Some goblins find a magic mastodon and ride it around, with nets, raiding. It’s straight out of Elimensters dog training adventure (“Heal!”) in that the the command word is the name of one of the goblins .. Conquer. There’s a little map showing the goblins lair but its not keyed, and some stats for the goblins and a couple of notes on goblin tactics. Because we have two leave room for THE TWO FULL PAGES OF BACKSTORY. Dude, seriously? The adventure is essentially a single encounter with goblins on a magic mastodon. Cool idea. Not an adventure and too many words.

Fourteen pages for … three? encounters. Maybe a new record? The party is hired to deliver a package (taxes) from a remote village to the capitol, in winter, and with a deadline. It’s a race, with environmental hazards, wandering monsters, and a couple of noble ne’er-do-wells to spice things up. There are roughly six pre-programmed encounters over the course of around 40 days of travel through the snow. Bandits, who shoot at horses. A straightforward monster attack. A windy bridge that can delay travel. A blizzard. A small town, and an avalanche. The bridge encounter is interesting since it’s a very straight forward “risk vs. time delay” type of encounter. There are about 7 creature encounters on the wandering table and about three weather related ones … I’m not sure that’s enough to sustain a 45+ day adventure … at 33% per day that’s about 15 encounters … this is a slow burn adventure. The meddlers only show up a bit and are absent from the middle of the adventure, which doesn’t really lend the feeling I think the writer was hoping for? There’s a questionable decision or two, like sealing the tax inside a wizard-locked container. How much more fun would it be to put the constant temptation under the players noses? I’m not sure about this one. The length (45 days) make me thick it’s a little slow and full or drudgery, but a decent amount of the wandering and programmed encounters are strong … they are more than just straight up monster fights and offer some interesting opportunities, like protecting the horses and make judgements on who to trust. I suspect you could get some good play out of this one … and not even have to put a massive amount of effort in to get it.

The PC’s are hired to go rescue a slave girl, which ends up being wilderness adventure on the journey to catch her abductors. This continues the fine tradition of OA adventures in Dungeon Magazine; the vat majority of which are of very high quality. In reviewing this I was struck by how similar OA is to Paranoia, without the PvP of course. Bizarre things and a rigid hierarchy make for Living in Interesting Times! Anyway, Fat Bastard made a deal with a Fox spirit and got rich from it. Now its time for him to hand over his daughter as payment, but instead he substitutes a slave girl, who is his daughters best friend. Something goes wrong, a servant sent to hire the PC’s is mightily confused with details, there is a pile of assassins on the tail of Fat Bastard, and THEN you get to throw in all of the fun of D&D with an OA twist. Bird-men, spiders, spirit-creatures and the like. There are six or so programmed encounters on the trail of the slave girl/daughter. I was impressed by the … expansive? sandboxy? Nature of the encounters. One has some giants hunting humans in a ruin. You get a nice little area map, some starting locations, and what the people are trying to do/accomplish. A perfect base recipe for mixing in the chaos and Rube Goldberg plans that PC’s always bring. Several of the others are more like this than not also. That kind of encounter is really something I can get in to. Enough information and set up to build on. Again, a very strong OA adventure. This makes me want to run an OA campaign.

This is a school of necromancy presented as a normal adventure. A handful to a dozen level 1 & 2 wizards and a couple of 18th level ones. It’s got a REALLY big wind-up, with a halfling village, basket weavers, and a lot of background that doesn’t really contribute to the adventure. Unlike most, though, it DOES have a few things to steal and/or some subtle humor. There are a couple of throw away lines about the halfling baster weaving industry and the river/name origins that are pretty cute and worth stealing. The rest of the adventure is really centered around the school for necromancy, located underneath a graveyard. It’s only got about 11 keyed rooms (not continuing the individual dorm rooms) and it on a fairly linear shotgun shack layout. The students and instructors are kind of scattered around, along with a classroom schedule and some details like initiation rites and so on. As an adventure it’s a pretty crappy one. Slaughter some level 1 students and navigate 2 level 18 mages (and a crippled dragon.) As an adventure it fails. There’s not much to do/see. As a LOCATION it’s great, and well worth stealing! I can see snagging most of this and dropping it in to a city, or near one anyway, and making it a morally questionable resource for the PCs to take advantage of. “Nope, no one around here to cast raise dead … well, except for THOSE guys, out by the river.” The students and staff have personalities that are just a cut above throw-away. You could certainly take the personalities and the spirit/ideas behind the set up and use it to great effect in your game. There’s the usual poor organization and such to wade through, but an hour or so with a pencil and notepad would let you cull some notes for a wonderful little place. In fact, I’m going to do that now for my Dungeonland campaign … Kryshal just got a new magic school!