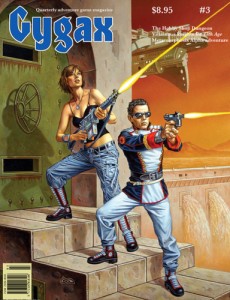 This is a 33-ish room dungeon in an old dwarves fortress. It’s a pretty decent little adventure with a great map and nice degree of variety. It perhaps relies too much on standard monsters and is light on the treasure. It’s also a little verbose at times and could use a good edit to prune back some of the wordiness. It’s got a good foundation but could use a little more personality and the insertion of some faction play would add a whole lot to it.

There are almost three full pages of introduction and “advice” to kick this adventure off. There’s about one full page of background and history of the dungeon. This is WAYYYY too much for the length of the adventure. If this were setting up a megadungeon then maybe it would be appropriate, but its not really offering anything unusual or different. Dwarf stronghold. Invaded & massacred. Done. The should of the adventure belongs in the rooms and the text therein, not in a giant all of text up front that doesn’t really do a whole lot to expand the adventure or offer opportunities. Every word has to add to the adventure. Every. Single. One. The background is then follow by just under two pages of advice. Not advice relevant to this adventure but rather the same general advice seen a thousand times before. Read the whole adventure first. “When you feel ready, gather your players and have then create new characters for the campaign.” Maybe also “Breath in. Roll dice. Breathe out.”? Yes, I’m laying it on a bit thick but I can’t stand this sort of thing. There might be two or three paragraphs worth of relevant and useful information … about the amount I would normally expect to see. I find everything else distracting and the … languid? Conversational style a turn off.

This less than strong effort is followed up by a less than great wandering monster table. Stirges. Kobolds. “Choose something relevant.” “Death scream.” This is not really what I want to see in a wandering monster table. I don’t mind the stirges (especially since they come from someplace on this level) or even the kobolds (who are wanderers fresh to the complex exploring like the party. I like the addition of death screams and the like, especially for mood setting, although I’d like to see a couple of more suggestions. That point, and the “choose something relevant” are really what I have a problem with. As the DM you have to put A LOT of work in to an adventure to fill it out and run it. I’m looking for just about everything in the adventure to provide inspiration to me to help me run the thing. “or some such” doesn’t help me. Nor does “something nearby.” If you’re gonna put “something nearby” on the table then I expect you to annotate the map with the creatures. Otherwise I have to go look up the room numbers of the stuff nearby, check the key to see if there’s a monster there. There’s not so I have to go check again … and so on. The map looks like Poiré had a hand in it. I don’t know if he did an original or simply tweaked Ernie’s, but it is one of the best. The layout of the map is excellent, with lots of loops and features on it and elevation changes, all hi lighted by the color treatment I’ve come to know from Poiré. This is exactly the kind of map you you hope to see when you crack open an adventure. What’s that thing? Green blobs?! Cool, columns and rubble! The map inspires … exactly like EVERY part of an adventure should.

The meat of every adventure are the encounters. The encounters here are a strange mix of interesting and not … quite … there … all in the same encounter. There’s a great encounter with a huge ogre on a pile of junk, digging through it oblivious to its surroundings. There’s a great piece of art accompanying this, showing a kind of ogre king on a throne, a little reminiscent of that final shot in Conan, showing Conan the King. Unfortunately there’s not much else to this encounter. Just a couple of extra words, with a name and the role the ogre plays in the dungeon and his relationship to the other groups would have added an immense amount of life to the encounter … and to the dungeon. There’s a decent number of encounters like this, needing just a little bit more. There are also pot-bellied gnolls who use a balcony as their toilet, a great little water spider encounter. There are A LOT of goblins here, in a colony, and even a quite large group of wolves and stirge. Thus there’s a good variety of single and double creature encounters interspersed with large colonies of creatures. There does sometimes be a tendency to explain history and former uses, which are all wasted words. There’s also a room or two that LONG overstay their welcome. The potters is full of smashed pots, a couple of which can be put back together if you try hard enough. The pots are described in an excruciating level of detail … which no visible pay off. Perhaps they refer to different levels or I’ve missed something. Likewise a ghostly room has a journal with A LOT of detail. One of those long soliloquy’s that no player can sit through. There’s a decent amount of variety though and the real standouts are the things that are NOT from any book: a nest area of weird birds and a strange vampiric cloud. Those elements give portions a real weird/OD&D feel, the kind I like so much.

The magic items are motley consumable with a touch of the unique. Potions and scrolls of no unusual element with bog standard spells are sure to be used and yet don’t provide any interesting opportunities. There’s a unique magic item or two that add a nice touch and are interesting. There’s also a common item or two that are nice mundane treasures, like an inlaid sword. The vast majority of the treasure is just not that inspiring. IN fact, I shouldn’t use the words ‘vast majority’ … there’s not really much here. The level feels a little light in the treasure department. That goblin horde has next to nothing and perhaps the only decent horde (1400gp) lies with a potential ally. I actually kind of like the moral quandary that provides … I just think that it’s going to beVERY difficult to level.