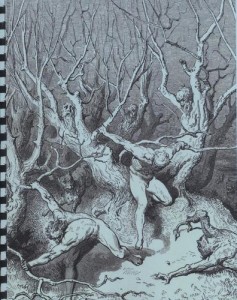 The second adventure in this review is the reason I went out and bought all of the issues of AFS Magazine. You should own AFS #3. Go order it right now. If you don’t you will miss one of the finest visions of D&D published.
Into the Black Kingdoms
by Scott Moberly
AS&SH
Levels 2-5

This is an exploration of a ruined temple in an African/jungle setting. It starts in a rather literary sense: a little backstory in which a friend and sometimes companion of your dead Uncle lies dying in a shabby tent by a greasy campfire. Gripping your shoulder, he tells you a tale. That’s some 20’s lit opening there, instantly recognizable by anyone who has ready Lovecraft, Smith or Howard. He tells a tale, two north of Kulalo, off the Black Coast … ivory trading ships and a jade crocodile with emerald eyes as big as a mans head. All of this is handled in a short DM soliloquy, ending with the parties guide saying, as the soliloquy ends: “This should be the Village Gazabomwe.” More of a con game intro, but, it illustrates at least two great techniques that I find add a LOT to adventures: adjectives & proper names. Which is to say, the party does not approach the Village _OF_ Gazabomwe. It’s Village Gazabomwe. I know, it seems simple, but the archaic use of the proper name summons that ancestral memory deep down in side of you. The ones that hide all of that ancient jungle temple lore. The tyranny of the modern is thrown aside and replaced by the romantic mystery of the dark interior. Second, note the use of adjectives. It’s a GREASY campfire. It’s a SHABBY tent. Tongues are loosened with FORTIFIED wine. Finch does this. Stroh does this. Scott does this. Their adventures are able to much better invoke strong imagery because of their liberal use of the adjective. This allows them to get away with a minimum of words to invoke a particular feel, to implant a seed in the mind much more effectively. And that seed is the critical element for a DM. If they can help me imagine it then I can communicate it to the players.

Enough! There is a small paragraph or so that details the village and the groups interactions with them. Don’t be a dick, bring gifts, and enjoy the party. The ruined temple exterior is described in just a couple of sentences. SCANT ruins of an ANCIENT temple to a NAMELESS god. Heaps of MOLDERING stone BLEACHED white. Searching fins a stone that can be pulled up, resulting in a MUSTY smell of OLD bones and decay. Below, a PITTED grey stone stairway leads to UTTER darkness … Below are eight rooms to the ancient temple ruins. Eight pretty good rooms. African devil fave masks with magic mouths “You have entered sacred grounds” “leave now or die one thousand deaths!” That’s good stuff. There’s a room with an “evil merman” statue and a lever on the wall. Pulling it causes the room to flood with water. Water activate the merman statue. You can push the lever back up. Again, nice combo, nice imagery. The lever, stuck as it is when the room floods, CAN be pushed back up to stop the water, but there’s a hostile merman statue in the room. The treasure is good, a rhino hide bracelet studded with jewels, and the like. The monsters are at least not generic, if not unique. The wight, the former chief of the cult, a ravenous african man with yellow filed teeth, red-rimmed eyes, and dreads, and filthy green cape. That’s a fucking monster right there! Describe him to the party and they’ll be pissing themselves trying to figure out what he is. How much better is that then just saying “a wight lives in this room”. The designer must have a strong vision and must be able to communicate that imagery to the DM. Scott does that.
Hyperborean Laboratories and Cave System
by Benoist Poiré
AS&SH

This is a 40-ish room ancient hyperborean lab complex, part cave and part dungeon. It’s also the reason I bought all of the AFS magazines. More specifically, I saw the map. I’m familiar with Poiré from therpgsite and more specifically his thread where he laid out a megadungeon and detailed one level. The map was wonderful. A full fledged megadungeon level. Not the simple shit that Rappan Athul passes for, or the “fill the graph paper” stuff that Lich Dungeon did. Poiré’s levels ALMOST fill the graph paper, but not with endless repetition and symmetrical designs,. Instead everything seems much more organic and there are significantly more interesting features in the levels, He also uses color to great effect, adds lots of features to the rooms and hallways, and frequently uses passages running above or below others to give a hint of a third dimension. This isn’t Thracia level visibility, but more “a really awesome and complex one level map.” The map alone is worth the price.

One of the seven wonders of the modern world is surely the Internet. With it we are able to communicate with people from all over the world and share our ideas. Because of it we get to see what D&D means to other cultures and the games of people like Melan and Poiré. The aesthetic they bring to the game is new and fresh when compared to the cultural underpinnings that drive the American market we are all familiar with. The hobby needs more of this cross-culturel influence.

What Poiré has done here is create a wonderful OD&D-like dungeon full of the weird and wonderful, but with the underpinnings that somehow … foreign. Everything is just a bit off … in a good way. Imagine a terribly creative person, who has never played D&D before, creating a dungeon. That’s what we have here. The traditional influences are almost not to be found, or at least are not readily apparent. That’s quite remarkable and results in a fabulous experience. Further, each room has two sections “In my Campaign” and “In Your Campaign.” The first describes the room, as a GOOD traditional adventure module would. The second is almost a designers notes section for the room. Ostensibly it gives tips and advice on how you can integrate the room in to your own game. In reality it amounts to a designers notes on the rooms. How to use the room, what its intended to do, and so on. And yet the rooms don’t feel like an academic exercise. They feel organic and work together to provide a unified experience … and that’s what the designers notes communicate, how to achieve that effect. I’m going to give just one example, from early on. A clay pillar stands in the room. It’s slick with moisture. Approaching it and touching it will cause it to animate. Faces appear in the pillar, as if they were just under a thin layer of wet clay. Arms reach out and try to slowly embrace people nearby. They pull the grabbed people and consume them. … It’s a teleporter room. You come out of a similar pillar in another room. Room after room after room is like this.

It seems like all of the rooms describe effects, not rules. I may be mistaken, but I don’t think there’s a single rule anywhere in the adventure. The closest he gets is “I made the monster 5HD in my game.” But there are effects. LOTS of effects. It’s up to you, the DM, to adjudicate these. I think this is absolutely magnificent. I can make a ruling at the table. I can do monster stats on the fly. But the imagination … THAT’S what I’m paying for and that’s what this thing delivers. I can’t emphasize enough how refreshing I find this style. A triumph of the romantic over the mechanical.

I may make three criticisms of the adventure. First, it is sometimes hard to pull out specific parts of rooms. This is typically referred to as a “wall of text” problem but I’m not sure that description is accurate here. Or perhaps it is, but in a very non-traditional way. It is sometimes hard to pick out key portions of the rooms that will need to be referred back to later. One needs to orient oneself to a room when running it. You need to be able to look at a room and instantly tell what is going on in it to run it at the table. The room descriptions here are excellent, they do a great job of conveying a lot of great information but it can be difficult to orient oneself to the room. Traditionally, a highlighter and the margin notes are used to solve this kind of problem at the table. Second, while the rooms tend to have a great deal of interactivity they do not tend to have a lot of loot. I would be hard pressed to recall any loot, magic or mundane, being present. The third criticism is related to the second, although tangentially. Some of the creatures could use a little more in the way of effects. While Poiré generally does a great deal just describing effects and not rules, he sometimes neglects to add effects, to both monsters and the environment. To a certain extent I believe this, as well as the loot, is related to the specific axe he has to grind. He’s used a very non-traditional format and I suspect the lack of description is a part of that. While that generally works fine, and in fact I’ve praised it in the immediately preceding paragraph, it zooms out too far with respect to the creatures, at a minimum. “that shoot poison bumblebees from its mouth”, or something similar, tacked on to the creatures would have added more functionality without destroying the mechanic-less vision.

I don’t usually plug work by people, but Poiré and Ernie Gygax are working on the Hobby Shop Dungeon, appearing in the pages of Gygax magazine, I believe. Considering the quality of this dungeon and his megadungeon thread of therpgsite, I’d recommend checking out the Gygax magazine work with Ernie. I know that his work appearing there is what pushed me in to ordering Gygax magazine.