The Hidden Tomb of Slaggoth the Necromancer 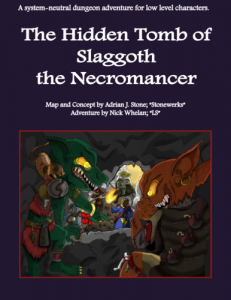 Mentioning the name of Slaggoth the Necromancer was once met with hastily gestured holy signs and murmurs of fear. The dead things which crawled and slithered from Slaggoth’s hidden tower were ravenous and evil. In the two centuries since the necromancer’s body was entombed deep within a mountain cave, the name has lost some of its gravitas. Young adventurers, unperturbed by ancient tales of long past evil, now think Slaggoth’s tomb ripe for plunder. But Slaggoth does not rest alone. A trio of ogres and their hoard of goblin minions have settled in the caverns. They are deserters from a great army in a faraway land, and are determined to keep the freedom they risked their lives to gain. Any who enter the cavern will be sliced and stabbed, their meat hung on hooks to dry, and their bones fed to the wolves.
This is an interesting little system neutral supplement. It describes the 24 rooms that make up a small humanoid lair inside an old necromancer tomb. The system neutral nature of the design allows the adventure to concentrate on the interesting portions without getting bogged down in rules. I think it succeeds much more than most adventure supplements, and I’d be happy if this adventure represented the quality baseline of OSR fantasy.

It’s got a good bit of introductory text. The whole “deserters from an army” bit brings a context to the creatures that isn’t usually present and adds a whole host of roleplaying opportunities. Just that one little bit of text adds an enormous amount to each and every room entry in the dungeon that has the humanoids in it. The hooks are an interesting mix of lame and interesting. Two are pretty lame: the guard wants you to kill the humanoid bandits and are too afraid to do it themselves, and someone hires you to get and bring back a book/ring/skull/etc. The usual lame assort meant of “lets be a hero” and “someone hired us.” The second two are a bit more interesting though. A fire giant named Blazebear, lieutenant to Warlord Gorgin, is paying handsomely for proof of the deserters death. Hmmm, that’s something you don’t see every day, and it brings a certain ambiguity and … realism? To the murder hobo genre. The last hook has the party going in to find one of the lost consorts to Slaggoth; it seems she may have had her favorite toys frozen. These last two are the more interesting, I think, however the variety here is nice to see also. You can be a hero, be greedy, work an arbitrary line in the moral sand, or appeal to sentimentality. The best hooks appeal to players and, surely, there must be one in there to appeal to YOUR group of players.

The actual dungeon is more of a linear path through a cave with an offshoot here or there. There is some decent variety added to the map through stairs up and down, a tunnel running under another, and a chasm with rope bridge over it, complete with ledges for the humanoids to chuck shit at you. Pools, pits, doors, and a dais round out the map. This is, essentially, a linear map, but I think there is enough variety in the placement of the dead-end branches for the place to feel like a real cave and lessen the impact a linear map usually has. Linear forces choices on players that a more open design would not require. It also forces on to suspend disbelief a bit more. There’s a bear, relatively deep in, that has remained in hibernation A LONG time through a LOT of activity. I don’t know much about bear hibernation, but things are being stretched a bit, IMO.

The actual encounters are an interesting mix. The humanoids encounters tend toward the tactical side of things while there’s still decent mix of weird and unusual mixed in to the other rooms. For example, there are some goblins watching the entrance through a crack, that release wolves should anyone drop by for a visit. Similarly, there is a rope bridge with goblins on a ledge on the other side that fire on players. Both of these, and in particular the rope bridge, will need to be passed if the group if to continue. There’s nothing exactly wrong with either of these, but they do provide good examples of the problems with a linear map. Recall The 13th Warrior and the way they avoided guards? Variety in the map allows for variety in play, zany schemes, and much fun. The humanoids use the cave, the hibernating bear, an ol d battle-scarred spider, and others things to exploit and co-exist. Little bits have extra data and background in the ad-hoc sidebars. There are of varying usefulness. The old spider gets a nice little write-up, short but very interesting, in a sidebar. In play, however, its not clear how much this would add. There’s a silver axe blade stuck in its back as extra loot, which is a nice touch, but the whole ‘its smarter than most spiders” thing, which is the REALLY interesting part, doesn’t really appear to be able to be used very well given the context in which its encounters You can give your goblin sentry all the backstory and personality in the world, but it doesn’t matter if you then say “it attacks immediately!”

The room descriptions are nice though; each one has nicely short and yet evocative bit of text associated with it. It’s not hard at all to imagine the room and that’s the key to being able to deliver something interesting to the players. The hibernating bear is surrounded by fish bones and scraps of half-eaten food. Bones with marks of battle on them … and a silver ring with polished jade on one dismembered finger. Caverns with the stalactites and stalagmites broken off to make extra room. There are great puzzle rooms and weird effects, like a room full of mirrors with interesting things being seen in them. In terms of treasure there’s this little tid bit to serve as an example: The third chest contains 1000 silver pieces, and a bejeweled skull which will whisper the secrets of necromancy into the ears of a magic user, granting them a bonus on any attempt to research a necromancy spell. That’s pretty cool! Most of the magical treasure seems to be the same unique vein, while the mundane treasure has just enough description to be interesting; the silver & jade ring above being a good example.

This entire thing feels like a good old dungeon crawl, with a great mix of traps, treasure, monsters, and weird stuff. Except for some pixel-bitching about a [somewhat] linear map, I think it does an excellent job. I look forward to seeing more like this. But …
I’d like to believe there is a strong market for this sort of thing. I’m sure I’m wrong and would be depressed to learn that most players don’t look for supplements outside of their particular niche of rules. Just the meta-think makes me depressed. I’m need to go stare at that last illo in the 1E DMG.

2 Responses to The Hidden Tomb of Slaggoth the Necromancer