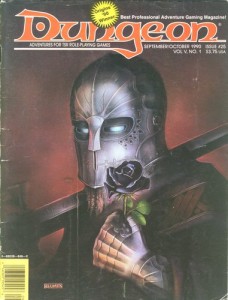 This is a brief village investigation followed by a set-piece combat in the village. The village has some standing stones in the middle and a chalk design on the hill. Two of the stones have gone missing and the village mage has turned up dead. Weird, eh? The party pokes around the village, finds the mages journal that reveals he turned the stones back to flesh, then find the mages ring that he did it with. A holy day comes around and a vrock attacks to get at the sacred chalice from the church. So … nothing you do makes any difference because the vrock will attack, out of nowhere, on the holy day. Oh, you can go dig around in some journals (oh boy! Story exposition via journal!), and you can kill a zombie and bring the rest of the stone circle back to life. But you won’t learn what’s going on and none of it will help or predict what it coming. Thirteen pages for that seems a bit much. And there’s virtually no detail for the village or the people in it. The whole “standing stone are actually flesh-to-stone shamans from a FAR earlier age” thing is nice. And when you bring them back they die in interesting way because of the erosion the stones saw. Most of what you need to know about this adventure comes from the following, near the beginning of the adventure: if good-aligned PC’s decline to go to the church then the DM should give each a diety-sent affliction, like a boil on the nose, as a warning. The adventure is further burdened with a terrific need to explain everything and there is a great deal of effort put in to keeping the party in the dark. Speak with dead requiring tongues, farm boys who have not seen their employers, dead mages who never saw their attackers … it’s all a set up to no purpose.

I’m not really qualified to review a MSH adventure; I loathe the superhero genre. I think this has terrorists taking over a club for rich people, who are actually all evil super villains. Uh … that is all. [Insert amusing story about The Great Man Alive, a Champions character with the disadvantage “Dead”.]

This is a ten-room lair/tomb full of moon orcs. Those are normal orcs who eat moon melons and have some random benefits. So. Orcs. It literally takes a column of text to tell you five entries on a table for random INT. -4. -2. Normal. +2. +4. So … padded to hell and back. I know, right? Padding in Dungeon Magazine! The lair/tomb is pretty small, at ten rooms, and the layout is a simple branching one. The first five rooms fit on one page, along with the map. The mutant orcs are a nice concept but poorly implemented; clumsy with too much text that looses the A W E S O M E they could be. Hell, mutant anything is cool. [Uh … Everyone knows that Gamma World is my One True Love, right?] The dungeon sucks. The first room is nice trapped door/murder hole guardroom set up thing. The adventure notes a few reinforcements when the shit hits the fan, but not much beyond that and nothing about the leadership jointing the frat. The leadership is disappointing as well. They get names, and individual lair rooms, and have some semblance of personality. There will, however, be no chance to interact with them and so all that they ever were or will be is lost in an instant. It’s a hell of a thing, killing an ma^h^h orc. Oh yeah, and it’s more fun to talk to someone and THEN kill them then it is to just hack them down.

One of the greatest examples in all Christendom of bad room writing is contained herein. It’s not platonic, but pretty damn close. I leave you with it, as an example of the joy you can find herein: “4. Trophy Room. This room once contained trophies of war. Swords, spears, and armor of all kinds were dedicated here to the everlasting glory of the fallen orc leaders. Centuries ago, the walls were draped with elven banners, dwarves sigils, gnome heraldry, and the flags and standards of men, goblins, and various orc tribes. The moonorc leaders have stripped the room of anything useful in order to outfit the tribe. The weapons and armor were quickly divided among the warriors, while the flags and banners were torn down and used for blankets or ripped apart and resewn into bags, sacks, and clothing. The room now contains only refuse and rusty, unusable equipment.”

This is a small eleven room two-level cave complex. It feels more realistic than a lot of caves, probably because of the nooks, crannies, and major ledge. It’s a little bizarre. There’s about a page of introductory background text/journal for the players to find. There’s a regional map that doesn’t come in to play at all except to locate the adventure in The Known World … but there’s nothing special about the location and no wilderness adventure. The adventure is launched in to almost immediately (at least by Dungeon Magazine standards) and ends up being a tight little affair. The Wanderers table is nothing special (“they attack immediately!”) but the caveman, proper, is interesting. It’s got a couple of loops and seems more like a realistic cave. The way from the upper level to the lower is a huge chasm. There are ledges, nooks, and crannies. I really like cave adventurers that feel like caves and this one, while not Stonesky, gets close enough to satisfy. Inside is a motley assortment of creatures, from trolls to harpies, to giant worms. A spider attacks, lowering itself on silk, while climbing down a ledge. Harpies and trolls don’t like each other (more could have been done with that.) The adventure is nice little one, and includes a non-standard magic sword and some treasure that you can repair to make it worth even more! Reviewing Dungeon Magazine is not a pleasant affair, but this is a little ray of hope in the darkness. So much so that I went back to rpggeek to see what else the author had written. This isn’t OD&D, but more like some kind of … Harn-like environment. Quiet, primitive, tight. I wouldn’t have a problem running it. It even has some cave toads with paralyzing eyes!

Danger! Poser Alert! Danger! Poser Alert! Hmmm,ok, maybe not poser. See that cover, with the black knight holding the black rose? Yeah, you know what means: Someone read Ravenloft. In this case it’s Wolfgang Bauer. Checking his publishing history, we can see these early Dungeon adventures appear to be his first published items. This adventure is some kind of mash-up of Ravenloft and LOTR. Bob, Witch-Kingof Angmar, is under the control of Sue, Dark Lord of Evil. She’s got his magic circlet and he’s tired of being alive. He lures some adventurers to her evil volcano-land Dol Gulder and hopes they pop her ass so he can finally be free. And he’s a gardener because it brings some respite to his tired soul. [As a totally coincidental aside: does anyone know what the official emoticon is for “puking ones guts up?”] Oh, wait, wait! I gets better! The tagline for this adventure is “Red for Love, white for purity, black for death.” I wanted to blame Vampire for this, but it looks like it came out a year later. This is a hack-fest in a monster-filled fortress of Sue.

The first two or three pages are the setup. Lot’s of tortured souls, murdered high priests, black roses left as calling card, mysterious notes “My master bids you join him at his home” blah blah blah. Evil bad guy taunts players. Hang on, let me quote … “His imprisoned soul known only restlessness and torment.” The whole backstory hook involves a complicated timeline and special magical items and blah blah blah blah. The usual set up nonsense. The group is paid $10k each to go find the killer of the high priest. Lots of clues are left for the party, since the poor poor tortured soul wants the party to find him. There’s four or five wilderness encounters on the way to Mordor, at least two of which are totally bizarre, but not in a good way. The first is with a band of fire giants. Each has a name and a personality that goes on for quite some word count. They attack immediately and no doubt die ignominious deaths at the hands of 8th-12th level PC’s. Why pay all this detail to creatures which die immediately in 10 minutes of pure combat? And yes, later on in the fortress, the party encounter 8 elf prisoners who get NO detail at all, in spite of the fact they are eager to join the party and wipe out the evil menace. WTF?! The party also meets Radagast in the wilderness. This encounter takes a full page. The druid tells the party … well, nothing at all. The designer has spent a full page on a meaningless encounter. There’s also a decent, and deadly, encounter with Salamanders in a lava river. They grab people and dive under the lava. Ouch! But nice!

Dol Guldur gets a pretty extensive write up, with about 70 encounters. Gatehouse, courtyard, keep, it’s all there. It’s also some kind of monster circus. There’s a medusa in the garden, harpies in the towers, skeletons at the gates, shambling mound gardeners, fire elementals for hot & cold running water (ug!) The place has a decently interesting castle layout that reminds me of MERP products and the monster circus isn’t any worse than I6. There is the usual nonsense with room descriptions, like the paragraph that describes the history of a pool of dried blood. Yes, an entire paragraph to tell us that a pool of loos on the battlements is from where some skeletons shot an escaping priest. No body. Not fresh. Just some dried blood. The Witch King “tests” the pc’s, of course, by sending bad guys against them, and arranges to lead them to Sue. There’s also a whole complicated “wizard locked doors and gem keys” thing, which smacks of magical economy. Oh, and of course Sue has cast a bunch of wishes so passwall, teleport, etc don’t work inside her fortress. IE: the designer was too lazy to come up with an adequate adventure and/or scale the adventure to a level appropriate to passwall/teleport.

The place isn’t terrible, but it’s not all that interesting either. Kind of like a Ravenloft-light. An attempt at Realism that gets mired in some kind of jr. high Vampire the Masquerade nonsense. Sad face is Sad. 🙁