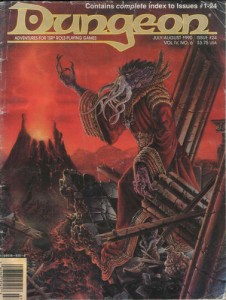 This is a six-level wizards tower with a nice little village attached. Weird things are afoot in and around the village and they are convinced its the nearby wizard and his orc servants. But he let them in to look around and everything seemed ok to them. But shit keeps happening and now the village leaders have disappeared also. He is, of course, evil. The village here gets five or six pages. There’s a nice map that’s almost Harn-like (that’s a compliment.) The villagers each get a little description and some rumors they know, and in addition there are some general rumors and rumors that only children know. A lot of the villagers come off a bit bland, without much interesting character, in spite of the two or three paragraphs that describe the occupants of each hovel. The rumors are good though, and a couple of the hovels get some decent character descriptions that ARE brief and memorable. This could really use a table for the village occupants and what they know and their memorable traits. To do the village justice you need that sort of reference to help run it as they wander from place to place. The tower gets a nice little outdoor map showing a hill, outbuilding, and some wolf guards chained by the front door. I liked those details a lot. Not just a boring little entrance but “on a hill” and “wolves chained to the front door.” The interior of the tower has about thirty rooms over seven levels. The tower is a weird mix of too much magic and not enough weird. There are glow globes that light rooms and a trapped fire elemental and piping system for hot water, etc. I really don’t get in to that kind of a “magical economy” sort of setting. This is then combined with a lack of the weird. Dude is an evil sorcerer and his tower feels boring and generic. This might work in a Harn-like setting but room after room of generic contents (Pantry, bedroom, bathroom, storage room) isn’t the kind of Magic & Whimsy, Wonder & The Fantastic! That’s what I’m looking for. This isn’t that. There’s not really a coordinated defense of the tower, so it’s another “guards die in place”a adventure. It’s too bad. If you combined the village and plot with a nice weird tower you’d have something more interesting. As it is, it’s a low-magic adventure, at best, and that’s being generous.

This is a ten room tomb with a gimmick: when you leave everything you picked up disappears and everything inside is reset to a state before you visited. There’s the usual nonsense about getting hired and vetted and blah blah blah to go on the mission. There’s also an attempt at a good wilderness wandering table. Each creature gets a little description of what its doing, but the action is generally a bit misplaced. The giant 2-headed trolls just attack outright, because they are hunting. We need a little more, like, they throw stuff from the top of a waterfall or jump out of a tree, or something. Just a little bit more. Likewise the other wilderness encounters try to add a bit of variety/description but don’t really hit the mark. The encounters need a bit more description to add some variety and imagination to them. The tomb is nothing more than the usual trap/stasis-monster fest. These sort of set-piece things may be my least-favorite kind of adventure. There’s a bit of weird stuff, like the statues that represent he stages of the buried sages life that have different effects on the party, but for the most part the place is static and relies far too much on magic mouths speaking command words that release status fields that house monsters. One or two of the descriptive bits are ok, like a box made of cured leather stretched over a wooden frame. That’s some decent detail. Even the parts that are supposed to be weird, like the lab where clay golems are made, complete with molds, are a bit on the dry side. It suffers from what I like to call “1E Syndrome.” This is where things make sense but are boring. Like magic mouths saying command words that release temporal status areas full of rust monsters. There’s no wonder and mystery in that. So, Tomb of Horrors light, with a little reset gimmick. As Aziz would say, not really my cup of tea, because I don’t like huge piece of shit in my tea. But maybe you’re in to this kind of gimmick/ToH stuff. You poor, poor, soul. You deserve better.

This is an underdark adventure with a strong “talk to the evil monsters” element. Underground gnomes are being impacted by earthquakes. They saw some mind flayers recently and think they are behind it. The party is sent to resolve the situation. There are eight adventure locations in the Underdark, with three of them being multi-rooms complexes, two quite large. Alas, the adventure sucks. The gnome halls where you start out are extensively described, even though you’re just picking up a mission there and there’s pretty much zero chance that combat will break out. The other two larger locations are a mind flayer outpost and a mind flayer city, both of which probably will NOT result in the kind of combat that would require an extensive map. All three of these are clearly social encounters and yet they are described room by room, with an extensive number of rooms each, just like you were exploring a dungeon. The outpost could be be forgiven for this, since its first contact with the mind flayers, but the city is a death trap to attack. There’s just no reason for the descriptions. It’s like you were docking at a warf in a city to get a tax stamp from the harbormaster before moving on the same day, and the entire city was described, room by room. I suppose you could reuse it, but then again you can say that for ANYTHING. The idea is that you make contact with the outpost, they convince you to parley, take you to the mind flayer city where you find out they are NOT behind it, but a big earth elemental thing is, and they want you to go fix the situation. The wrench is the drow chick running around who wants the elemental to destabilize the region. But she’s just a combat encounter and doesn’t show up as a social element, city or not. The under dark wandering monster tables are lame and boring ad just consist of a monster listing. The exception is for the ‘special’ encounters. There are 6 of these, occurring 1 in 20, which have more detail and are more interesting. A drow war party, a Rakshasa, a haunt and a water naga, for example. There add a little variety but the description emphasis is on realism rather than how they enhance play with the party. IE: the naga hides and the party stabs it, rather than the naga is an information broker or has a fetch quest or the like. The mind flayers at the outpost gets names, but not personalities, while the ones at the city get personalities, but not names. This is spite of the fact that the party will interact with the outpost flayers much more, the city encounter being mostly soliloquy. The big encounter at the end with the giant earth elemental monster and dark elf agent could use a more set-piece nature. More environmental stuff, ropes to swing from, or something stuff like that. As is it’s just a big room with a monster at one end, the agent hiding, and some chasms. Rope bridges, stone ledges, rubble to jump off of, etc, would have made this a more memorable boss monster fight.