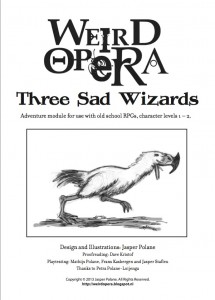 This is a little mini-region with a village, three main adventure sites, a number of wilderness opportunities, and some follow-up suggestions. The intent appears to be an adventure that could be used with all age groups. It largely succeeds with only a couple of exceptions, mainly around the village proper. The entire thing has a nice OD& vibe, with unique spells, OD&D idiosyncratic wizards, and different treasure.

In the local village teahouse three sad wizards commiserate. All of them are having troubles at home. The village is only briefly described as is one location: the teahouse. Both descriptions do the sites justice, from sleeping in barns to eating what’s prepared to the local hobby production of tea. In both cases the descriptions are just on the edge of what’s required, which is almost certainly the correct amount of detail. The village could use a few more personalities, especially since its mean be a kind of home-base sandbox location. The village section is the weakest part of the adventure and is the one portion where the “all ages” agenda is the most apparent. Things are a bit … polite? Serene? Vanilla? In the village. I’m not sure if its the teahouse, or the lack of other personalities, or what, but this section feels aimed at younger players more than any other. It’s only briefly mentioned, but the wizards appear to be in competition to get the party to look in to their problem first. The three wizards each get a brief write up. The descriptions are not very strong, but there is enough to build something from, especially if you’ve sen Radagast lately. Whats really missing here is the hook. Three wizards commiserating the the teahouse is not exactly the strongest of hooks. Yes, the PC’s will take the bait, but just because it apparent that is what they are supposed to do. It’s all a bit weak. I suspect it’s the all ages thing. While it’s easy for kids to play up’ it’s a lot harder for adults to ‘play down’ and that may be what’s going on here.

The three wizards each have a problem at their home and the three main adventure sites are their three homes. They specialize in plants, bugs, and birds, so the towers/homes are based around those themes. The three towers all feel like a bit different and have different things going on while still having the same general fairy-tale vibe. I suspect the adventure is written that way for the younger players, but the building of an adventure site and encounters without game mechanics in mind is also the kind of D&D I enjoy. It tends to be weirder and somehow more evocative of wonder and the fantastic. One tower is having trouble with the plants coming alive. One tower has an apprentice (9 years old) running wild, and one has an intelligent spider running the show now. In all three cases you get a decent little magical tower full of strange things and then the encounters. In two cases you may be able to resolve the situation with the core opponent without killing them. That’s a nice touch. The baseline adventure is not ‘kill everything’ but rather ‘resolve the situation’, and while there are a couple of suggestions given there is more than enough room for the party to improvise and do their own thing. That sort of open-ended nature is how EVERY adventure should resolve. The encounters are things like a gem glued to the bottom of a stool, or a pear tree with fruit that turns you pear shaped, or a scroll in a water tank. In other words, enough little details to make the adventure interesting and feel like a wizards tower without it being a full on gonzo experience.

The forest and road wandering monsters are not quite what I am looking for. There’s a little bit of charm present, from a pack of stray dogs to brat kids to an old peddler, but they tend to be missing that certain something that turns it from ‘just another encounter’ in to something interesting. The peddler needs a personality. The bandits need something other than the very simple ‘they could ambush/camp/robbery’ note. The surrounding wilderness has a number of places to follow up with, from giant anthills to ogre caves to boatmen camps to lost tombs. These are very briefly described and generally also lack that little something extra. The ogres have a locket with a picture of a little girl in it, but that’s about the extent of the personalization of the encounters. “The leader fights with a +1 sword” is not the height of adventure design. There is a great variety of new spells and several new/interesting magic items, from a new wand of wonder to a badger cloak. Several of the monsters felt new also, even if they did share the names of several well-worn ones.

This isn’t a bad little adventure packet. I’ll probably keep it, and may get a Lulu hardcopy when I order again. The encounters need additional evocative detail, but there’s enough here for it to just scrape by. This is almost certainly because of the simple fairy-tale like charm of the wizards towers proper, and the strength of at least two of them.