Temple of the Ghoul 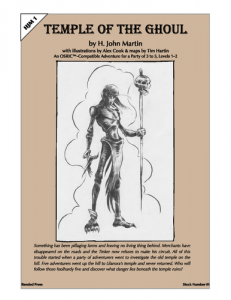 Something has been pillaging farms and leaving no living thing behind. Merchants have disappeared on the roads and the Tinker now refuses to make his circuit. All of this trouble started when a party of adventurers went to investigate the old temple on the hill. Five adventurers went up the hill to Lilanora’s temple and never returned. Who will follow those foolhardy five and discover what danger lies beneath the temple ruins?

This is a small ruined temple with about twenty encounters. It has a bright spot or two, but is generally an unimaginative and generic adventure. Unfortunately, it reinforces the “boring/generic” feel that I associate with 1E. It needs more wonder and imagination.

People have started disappearing ever since a group or murder hobos visited a local ruined temple … and didn’t come back out. The adventure takes two pages to set the scene and cover the backstory. You remember Sir Not-appearing-in-this-movie? He shows up in at least two different forms in the adventure backstory. It’s crazy. All of that space wasted by being devoted to things that have absolutely no relevancy in the adventure. I don’t understand all of this backstory. Is it just sloppy editing, or designers with delusions of authorhood, or do people actually like this shit? There are NPC’s referenced, more than once, that are at least three degrees removed from the adventure. What’s so puzzling is that this is mixed in with some modern day data that’s not bad. A one-legged sheriff, the importance of a traveling tinker, and the sheriff escorting him. People disappearing and in fear. There’s some decent stuff there. Not great, but enough to get started with at least.

The interior of the temple is so frustrating. It’s full of generic drapings that is then punctuated with a bit of the ultra-violence. Or at least some scene-setting straight out of the ultra violence. The very first room has the usual ‘once rich frescoes not defaced”, along with the usual “blood and fecal smeared pillars.” Ho humm, nothing new or interesting there. But then … “A dead dog lies in the doorway, its entrails draped over the stairs.” Wo! Thats nice! That brings the scene to life. In another room an alter to good is draped with dead animals and people, and an overpowering smell. That’s good stuff. There’s a crude drawing of an evil holy symbol on the floor … which would be MUCH better if it were instead laid out in teeth and small twig figures. Again, the core problem with the adventure. We get a generic scene that is then punctuated with something great. I understand juxtaposition. (I mock it all the time in my art reviews) and you would be forgiven in thinking that the normal is there in order to hi-light the bizarre. But that’s not it. The normal isn’t normal enough and it’s not evocative or jarring enough. It’s just the standard boring dungeon trappings. The rooms need to be more relatable and the evidence of violence needs to be more consistent, as in the holy symbol example. The monsters are just generic book monsters and the treasure just boring old book magic items. +1 shield. Ring of Protection. And a lot of coin. A LOT of coin and loot. WAYYYYYY too much.

The most disappointing part may be the main villain, the titular ghoul. It’s just a ghoul. “The ghoul will be here and will attack as soon as the PC’s enter the room.” That’s the ghoul description. After the dead dog entrails, and the weird ass alter, all we get is “ghoul.” I reviewed an adventure recently, maybe from Dungeon, that had a ghoul in it. In that one it was a gaunt and emaciated hunched over african man, with red eyes and yellow filed teeth. Absolutely no sense at all for the party to figure out what it was. Perfect description for a DM to build an encounter off of and help them run it evocatively. Compare to this one. “Ghoul.” Or, go check out “Where the Fallen Jarls Sleep” and the rest of the modules in that series, where undead get GREAT descriptions. This? This is not trying. Yeah, the alter and dog are nice, but there’s not much else in this to salvage.