EW1 – Voyage of the Stag Party 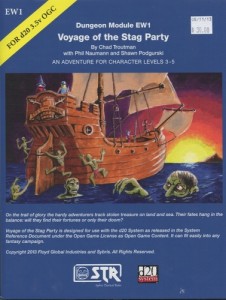 On the trail of glory the hardy adventurers track stolen treasure on land and sea. Their fates hang in the balance: will they find their fortunes or only their doom?

This is an adventure to an island fortress with bandits. It’s highly liner, loosely organized, full of charming art, and is a novelty item in support of a bands album (Sybris) , a 45 of which comes packaged with the adventure. While produced in conjunction with Three Floyds Brewing, it does not come packaged with any tasty brews. This thing is a hot mess and has little to recommend it other than the novelty. Some of the bits DO have great flavor, but its generally dumped together in a way that can’t be realized.

The opening read-aloud for this is half a page long, describing the party entering the town of Humboldt. “The next major building is the inn and tavern. This two-story building …” and on it goes. There’s no DM description of the town, just the massive read-aloud that is what has come to be expected. So much so that things get a little PoMo when the adventure, in a later part, states something to the effect of “players expect an encounter when read aloud shows up, so here’s some read-aloud to mix things up a bit!” Let’s examine the fundamental issue here: if it’s lame, then why do it? Because you are such an awesome (and misunderstood!) writer that you must prove to the world how flowing and evocative your prose it? That will show those 23 publishing houses that rejected your manuscript! Or, maybe, (like in this case?) because that’s all you know. The slavish devotion to form. The read-alouds here are extensive and lots of important information is imparted in them. This sort of marriage of the text makes it rough on you if you DON’T want to use the read-aloud. You have to be familiar with it in order to do your own thing, which is super-annoying.

The fun doesn’t stop there though. Recall how I mentioned things were a bit loose? At the end of the half-page read-aloud, which serves as both the players and DM’s description of the town, it easy “Also if asked the party can add 7sp each from the goblins that were slain.” Just out of nowhere that shows up. No mention of goblins at all to that point. There ARE goblins later in the adventure, but rather than mention the bounty there it’s added out of nowhere here at the end of the introductory read-aloud. This is quite a good example of the organization method, and the problem with it. I’m pretty sure that this section was tacked on after the adventure was written, and the goblin encounter, and then, in a kind of stream of consciousness style, the bounty tacked on. A bounty of 7sp per. So … the bounty is useless. It’s not enough for the characters to care about and the players don’t care cause gold != XP in 3e … so, 7sp per is just … meaningless detail? What follows this is a description of a warehouse that every effort known to DM-kind is listed in order to keep the players from investigating. If you’re going to spend all that effort in telling the DM how to keep the players out of it then why put it in? Seriously, this isn’t like an adventure or something around the warehouse, or traps to support play, it’s more like “don’t let the players go here ever.” type stuff. Half the town shows up to defend the warehouse if its attacked, and attempts to enter it are met with extreme force.

Somehow the party ends up at the Mutiny and Mollusk inn, a colorful place, where they are hired to go get some guys golden boots. The tavern has character. It takes a page to deliver it, but, still, it’s there. Legless storyteller beggars, horrible horrible barmaids, despicable insular locals, and Wrecker the Drunk Monk the bartender. They all have levels, and the whole “evil monk bartender” thing sounds more like a DM power fantasy. Again, perhaps a symptom of not knowing any better? All of this culminates in a goblin attack on a beach, which is used to deliver a soliloquy from a goblin captive. His half page read-aloud leads to the next part, the titular Voyage of the Stag Party, the ship that takes the party to the island. The ship show sup out of nowhere. “Make it clear to the party that they cant go overland to the island, it’s too far.” IE: go get a ship. And the ship put in front of them is The Stag Party. There’s a Lacedon attack thrown in before you get to the island. The island has two paths. One has a great encounter with some witch sisters. Like everything else in this adventure it’s got TOTAL bullshit mixed in with the good parts. A couple of crazy old wise woman witches out in the woods no an island is a great encounter, especially as written with their zombie and gimp “helpers”. The whole “leave your weapons out in the barrel by the door dearies” thing is too much and no self-respecting murder hobo would do anything at that point but burn the place down and loot the embers. There’s also a whole “they attack in the middle of the night” thing which is lame also. I have no understanding why or when monsters became just something to attack and/or double-cross the players. It’s far more interesting for play to have a couple of crazy old bats on an isolated island that the party can turn to for information/help in exchange for absurd requests, like, “sure, bring us 3 baby eyeballs … NOT BLUE!”

The castle/bandit hideout on the island has about a dozen encounters. They suck. Straight forward 3e set-piece encounters. The guys have names, they have personalities, I want to know more about them and how to use them. They are SUPER interesting monsters/NPC’s, just from the BS names and shit. But they attack immediately. Their names, their hopes and dreams, they are all lost. It’s a hell of thing killing a man. You take away everything he’s been and everything he’s gonna be. Look kids, I love killing people. Nothing makes me happier than stringing up a halfling NPC or setting a goblin on fire. But if you’re gonna give me names and personalities and goals then you need to add a social element so that comes out. Otherwise just make them generic, and take up a lot less space, and let me hack down the door, er, creatures. I WANT the social option, but don’t tease me with it. Give me enough to run a social option and then the characters can talk OR hack. Or, my favorite, talk and THEN double-cross the monsters and hack them down! The castle is nothing but boring rooms with things to hack. Lame. And then the whole adventure ends in a double-cross by the hiring NPC who isn’t the NPC anymore but an impostor! HA! Third act! My ass.

Bits of this are really good. There’s a joy of D&D seen in this, and a non-generic vibe that is great. Someone had a strong vision. But it’s put together like crap and is then further hampered by the lame 3e conventions or NPC levels, read-aloud, and set-piece hack the monster shit. There may be more going on here, but it’s so disorganized and the ideas presented so haphazardly that its hard to get the big picture of the adventure. And not in the good, old school charming way that Walking Wet or similar things are disorganized. I think the town makes its living off smuggling, for example, but that never really comes across well. In other words the core of the ideas of seldom presented and instead we go immediately to the detail. The flavor in the detail is good, but you never really have a great idea of the core concepts so its hard to run it as anything other than the linear thing it is.

The record that it comes with (or maybe, the adventure comes with the record?) is some ambient stuff. It sounds like an Enya-lite ambient 1990’s indie band with the usually winey/airy female vocals added on top. It’s not too bad for background music at a Natalie Merchant concert.

Hey guys, try again. Good color but less linear and be clearer. Make your magic items and treasure and monsters unique. We all like shivving bar maids in the throat, but give us the option to talk to her before we do it and then abuse the corpse.

3 Responses to EW1 – Voyage of the Stag Party