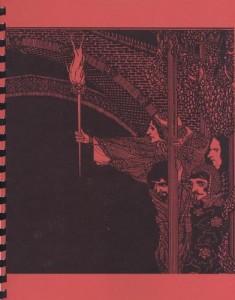 This is a small ten room dungeon set in an ancient hyperborian base. It’s shot, at about five pages, and the designer tries to bring some interesting content. Ultimately though the simple design and lack of interesting features unravels the attempts.

Oh caravan guard hooks, how I loathe thee. You can try and pretty it up with mastodon pelts and costume jewelry but ultimately it remains a crappy hook idea for low levels through high levels. The idea is that while traveling the party is attacked by a group of weird stag-men and, in tracking them back, discover their atlantean lair. There must be about 80 bajizillion ways for that to happen … but this adventure chose “7th level caravan guards.” It’s a complete throw-away except for the two little bits that are MAJORLY interesting: the mastodon pelts and the costume jewelry. That’s some good detail right there! With that I can build on something! My mind whirls! The nature of the expedition immediately becomes clear: diseased pelts and beads for the peoples of the region. And the fine cloth? That’s for a local ‘king’ … who’s not gonna come after the trader after he gets such a nice gift. Even a few small interesting details can rocket a DM to great heights. So while the caravan guard hook is a lame one it has JUST enough to build something around it. I need more though. more More MORE! Alas, more of this is what the adventure delivers; the boringly mundane surrounded by JUST enough interesting tidbits to elevate just a little.

The Ziege-men, the chief villains, walk about erect on hoofed goat legs with devil horns and dark grey fur patches. That’s pretty sweet! Sure, they are just re-skinned humanoids, but that’s all humanoids are. Smashed in doubledoor lead in to a hillside, rubble strewn everywhere. Inside is … boring room after boring room. Well, no. But not exactly great rooms either. You have to really work at it. There’s just enough description in the rooms to add a little detail but not really enough for it to take hold in my mind. A sea-green frayed rug, large and oval, covering most of the floor. Vaulted ceiling with missing chandelier, Arched doorway and verdigris stained double doors., a trapdoor with brass rungs leading down … almost there. Individually the descriptions seem to be good the entire thing just doesn’t gel together for some reason. Maybe there’s a central focus that is missing? I don’t know, but it seems to happen a lot in many of the rooms. The rooms somehow don’t seem real, or alive.

The monsters here are unique, which I love. From the ziege-men to a crystal ape construct, the there’s nothing boring about the monsters. Or the treasure for that matter. Loot painting, coins with weird designs, platinum thimbles, the treasure all delivers that extra little bit of description that I crave in an adventure. Far too often designers just rely on boring old shit, like “jewelry worth 5,000 gp.” That always pisses me off; I’m paying the designer to provide the imagination that I can riff off of and a generic description just doesn’t cut it. The noteworthy magic item, the Crown of Atlantis, also delivers in the magic item arena. Nothing generic about that item! There is a trident and magic helm that tend to the mundane but even they get a little of description. There’s a decent trap room with an Eye of Death, a kind of metallic orb that zaps people, which is pretty good as well. The adventure is missing a better order-of-battle for the creatures. Intelligent monsters should react intelligently.

I don’t normally review non-adventures, and this the rest of the issue is mostly off limits for me. Let me call out for special mention though the list of 100 mundane treasures. All treasure should have this much description. Just go to a random generator and generate some lists to print out for reference. Awesome Is as Awesome Does.