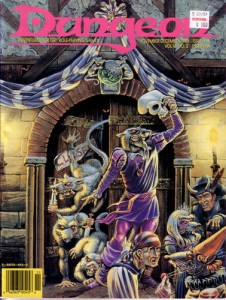 I missed my update last weekend. My wife & her friends were cosplaying My Little Pony at a local con and I was Discord. I know no one gives a shit but I’m bored after blowing out my gutters.
Masqueraider
Randy Maxwell
AD&D
Levels 2-5

This is a small wilderness adventure followed by a short cave. It’s set up as a kind of mystery. Something weird is going on, and either a bear, owlbear, or giant spider is attacking locals. The party hunts it down to a cave system. The introduction and wilderness area has hints of nice things: a cute ranch theme, rival parties, soldiers and others to ump for rumors. These could use some more work but generally have a seed of something good, especially when taken as a whole. The wilderness encounters, while having too much text (which was the style at the time … did I mention this one also wears an onion on its belt?) are not that bad either. Flies on dead ponies, a horde of newly hatched giant ticks, and some herders, for example. These offer some pretty good variety. The cave lair has a similar problem/feature: LOTS of text with some decent nuggets buried inside. There’s a nice dead adventurer party scattered throughout, along with their banner. The banner is a good example of little bits that add substance and style. The adventure is not awesome but the extra little bits are nice. There may be enough to make this one worth checking out.
A Question of Balance
by Nigel D. Findley
AD&D
Levels 8-12

One Encounter Wonder. The party sees an earth insurance salesman getting burned at the stake and has to free him from the villagers and then go kill The Other Thing that came through the time vortex with him. Which is one fight. That’s not interesting. There’s some pretty lame expository text to communicate The Balance to the party.

Country House Murder, except its a theft and the party is shipwrecked. (No Murder Hobo would be caught dead sailing; the ships are always wrecking.) Lots of people with things to hide and quirky behavior, so lots of red herrings. Nice use of a mimic & doppleganger which is mostly wasted in this thing. The NPC’s are strong, but the formatting suffers: its arranged like a location based adventure instead of a social adventure. A HEAVY edit could save this. Which would be a lot of work.
Master of Puppets
by Carl Sargent
AD&D
Levels 6-8

Uh … dungeon crawl with a duel-class 11Monk/14MU running ahead of you launching set pieces. It’s hard to see this as a level 6-8 adventure, there are A LOT of tough encounters here for that level and the entire thing is mostly linear. Room 1 then room 2 then room 3 and so on. The bad guy starts running around in front of you, dumping attacks at you while jumping through the door to the next room. It’s got a cute spot where animals get dropped from a great height and go splat on the party, but that kind of fun is not representative of the adventure. it’s just a set up full of set pieces.
Phantasm Chasm
by Erik Kjerland
AD&D
Levels 5-7

Another one encounter wonder. Except one hit wonders were good. The party gets ambushed by bugbears and illusionists in a dead-end gully. Ooooo! They are disguised! By illusions! *BLEEEECH*

A weird little village/town adventure that is mostly event based. The party wanders around, stuff happens, and hopefully the party investigates. It can end with a giant wererat attack during a village festival. There’s a very weird section where the party is arrested and jailed. Resisting turns the entire peasant population against the party and turns then in to outlaws. And then the party is rescued. All of this is done so the party can dress up in costumes for The Big Reveal: the big costume party in the village where the wererats rip off their masks to reveal themselves and attack! All that railroading. I hate that shit.