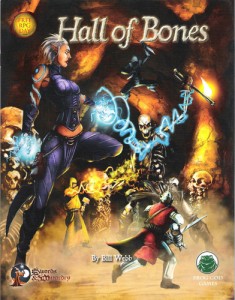 Frog God Games is pleased to present a short handling of our rule set, game theory and a short adventure of the award winning SWORDS & WIZARDRY game. The game is similar to very old school editions of the game, dating back to 1974. This was the game that came in a small brown (and later white) box, when men were men and well, henchmen were cannon fodder. What you will find herein is a ready-to-play adventure that can be run with only a few minutes of preparation.

This is a very short and mostly linear introductory D&D adventure. The designer does a decent job presenting several classic monsters in some interesting situations well worth ripping off. I somehow have the impression that this adventure sells D&D short though and I can’t quite place my finger on why.

Let’s play a game How about … D&D! No, instead I choose to play “Second guess the successful publisher.” This adventure is 20 pages long, only four of which contain adventure content. Five if you count the dungeon map. The first nine pages contain a rules summary and the same self-congratulatory Primer on Old School that was included in the MCMLXXV introductory adventure. I thought that Primer was condescending and grog when I reviewed that product. Now that I’ve had some time to think on it and reread it in this I still think it’s insulting and preachy. I can understand trying to explain to 3tards and 4orons that they are about to play a fundamentally different game and they should NOT think of it as D&D … because that will cause them to bring in their 3e & 4e play styles. This is a pretty fundamental problem, I find, with people entrenched in 3e & 4e. Deaths runs rampant until they figure out they are not playing D&D. They are playing something else. Of course, telling them that this is the REAL D&D and they haven’t actually been playing D&D isn’t going to be productive and gets back to that preachy, insulting style that infects the advice section in this adventure. Including the basic rules for S&W is an interesting choice. It’s not really clear to me that there’s enough here to allow a beginner to play D&D. Smarter choices, like NOT including the bullshit short story about the hireling, who’s never mentioned again and instead including a play example, may have been wiser. Ahhh, armchair quarterbacking, much harder before the advent of the ARPANET.

The dungeon map is almost entirely linear. I’ve noticed that this is something that many of the big designers fall back to. Webb does this. Curtis falls back to this. I don’t like it. I’ve been playing D&D for quite some time and I STILL get freaked out when faced with The Unknown areas of a map. I vividly recall playing a D&D game recently in which I felt utterly and completely lost in the dungeon. We weren’t; we had a good map and were not in that far, but there were several passages and stairways we had passed by. There was this overwhelming feeling of the unknown that I felt surrounded by. That’s the sort of feeling that a non-linear map invokes. That’s the sort of feeling that I wish the map in this adventure did.

The encounters here are a strange mix of the mundane and the interesting. There’s a chapel room that just has some boring old giant rats in it. This is in contrast to a ghoul room, full of junk, that has a recently eaten pig carcass in it. That’s a lot more interesting, although it;s just window dressing. We can compare this to the spider cavern, an excellent room. The great cavern is full of giant spiders, at least 60. There’s an iron cage 20′ from the entrance. Entering it finds the floor made of bricks. Pull up the bricks discovers a tunnel to a similar cage on the other side of the room … a hidden tunnel to pass through the room. That’s the kind of encounter I’m looking for. The giant rats bring nothing. The ghouls bring a little flavor text. The spider room brings the noise. Overwhelming odds. A kind of puzzle to get through it … it’s the kind of encounter that causes characters to bring blankets, chickens, and bags of flour in to the dungeon. IE: Perfect.

The creatures here are mostly just book monsters although the boss is non-tradiitonal, and therefore good. I wish more adventures would use non-traditional monsters. One of the things that drives me nuts are skeletons that have some sort of turn resistance. “They wear amulets that give them a 1HD more for turn attempts” may be the original offender, but “the area is super evil” and “your gods can’t reach here” are other pretexts that I loathe. Instead of making up some nonsense why not instead make up a new monster? I know the difference seems small but there seems to be something important here in practice. The players are confronted with something new. They don’t know what to expect, what the special attacks or defenses of the creature are. Does it level drain? The PLAYERS are terrified. In contrast, when a traditional monster shows up and then acts in a different way this somehow seems unfair. The rules are being changed under the players. The treasure here suffers from a related problem. BOOK ITEMS are boring. “+1 hammer” is not a magic item that excites anyone to find. Contrast this to a cat statue that turns in to a cat that grants someone good luck. That’s interesting and delivers on the promise that published adventurers implicitly make: This is new & interesting and worth your time/money.