DCC #67 – Sailors on the Starless Sea 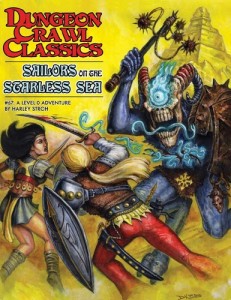 Since time immemorial you and your people have toiled in the shadow of the cyclopean ruins. Of mysterious origins and the source of many a superstition, they have always been considered a secret best left unknown by the folk of your hamlet. But now something stirs beneath the crumbling blocks. Beastmen howl in the night and your fellow villagers are snatched from their beds. With no heroes to defend you, who will rise to stand against the encircling darkness? The secrets of Chaos are yours to unearth, but at what cost to sanity or soul?

This may be the first or second adventure for the DCC RPG … and it shows. It has all of the elements that make a DCC adventure great but they are not yet fully formed. As a result we see an adventure that captures the spirit of DCC but doesn’t always present well.

While there’s background there’s not really a coherent introduction. Or maybe it’s the other way around. Anyway, there’s history but no real defining moment for the players to get involved. The back cover blurb may offer the best description with its “beastmen howl in the night and snatch villagers from their bed. With no heroes to defend you …” and you’re off! There is a nice little rumor table to go with things but mot much more than that which could be useful.

The ruined keep has several entrances and a couple of features to check out. That’s a great thing to include. There’s not just a front door, but places in the wall to break through, walls to climb, and so forth. Working with the DM to support these sort of non-railroady play style is one of the reason why I like these open-ended locations. [And yes, I feel that Far Cry 1 & Far Cry 3 are FAR superior to HL2 & D3 for this very reason. Fuck your story HL2! I want open world gameplay!] Things degenerate a bit as the ‘Starless Sea’ is reached as it moves in to a more linear design, but, like I said, it’s an early adventure. The DCC guys all seem to skew this way anyway, from Curtis & Stroh to Goodman. You can see it in the early, suck ass, old DCC line and you can see shades of it here.

I like the encounters. There’s a good variety of weird shit, creatures, and hazards to fill the time before you die. In particular I like the way Harley adds a bit of color to each one. This additional color does WONDERS to help invoke certain imagery in the DM, which in turn helps them communicate that feel to the players. There are ragged banners, and a section where the players must snap the fingers off of an icy corpse to free the ax it grips. As usual I feel my own writing does little to communicate that to my readers. That’s the case with many of the best designers so you’l have to trust me: the imagery Harley conjures is powerful stuff, cementing pictures in your mind. The creatures here are a mix of ‘Beastmen’ and a few others, like tar ooze and corpses on animated vines. What I love about this is that it is reminiscent of classic monsters, both fro D&D and from myth, but they have that OD&D weirdness factor to them. Monsters tend to be unique in DCC and that unique feel is captured in every encounter, up through a nice table of ‘random weird-ass and scary beastman attributes.” I like.

The encounters ARE a bit lengthy at times. My eyes glazed over more than once. While certainly features stand out (the awful act of breaking fingers to get a treasure ax) there is A LOT of text in many of the encounters. The key to successful writing for an adventure is for it to be short enough, with enough imagery, for the DM to refer to it instantly, or for it to be so memorable that you never have to read it again. (“Old Bay, the crab loving Hill Giant”, is all I need to remember.) This fails on both of those points in several places.