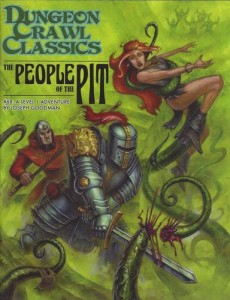 It has been years since the last virgin was sacrificed; and now the pit beast awakens once more! Every generation it stumbles forth on undulating tentacles from its resting place deep below the great ravine, its towering blubbery mass ravaging the land before returning to slumber for decades. But this time is different. The Great Beast strikes with intelligence; bands of faceless gray-robed men emerge from the tenebrous depths, herding the beast’s roaming tentacles before them. The enigmatic people of the pit live despite the passage of ages! The earth shakes each night as they herd the primordial tentacles even further, while the villagers ask: is any man brave enough to put the sword to this menace?

This is an actual dungeoncrawl. through an old temple/cave system. There are four levels and maybe … 60 rooms? It has the usual elements of a DCC adventure: unique creatures and (mostly) strange magic items in weird environments that encourage the DCC awesome system. It’s got a good mix of encounter types, including some that can’t be overcome by a first level group. My reviews of the new DCC line have been haphazard, but so far I don’t think I’ve found any of them that outright suck and most are pretty good. This one continues the goodness.

There’s a great rift in the earth, a mighty chasm hundreds of miles long. Every century or so a great mass of tentacles erupts and ravages the countryside, killing many. A religious order began organizing virgin sacrifices every decade in order to stave off the massive century assaults, but the cult has now been driven off and the tentacles begin to stir while strange cultists have been seen in their vicinity. Someone must put the cultists to the sword and solve the problem once and for all.

I sometimes find it hard to review products and this is one of those cases. I don’t know why, but it tends to cause short reviews. The content here is good and the encounters have a decent amount of variety. Bottomless pits, slippery steps, single-file areas, broken causeways, rope ladders, sliding stone alters and, of course, lots and lots of tentacles. Tentacles as eye candy. Tentacles as enemies. Tentacles as obstacles. Tentacles as Allies. Tentacles as boons. If you like tentacles then this is the adventure for you. A great number of the enemies have some kind of tentacle aspect, the most common being the cultists. They come in various types with various levels of tentacle-ness. Special bonus: when you kill them a mass of tentacles erupt from their carcasses and attack again! They run around doing nicely iconic cultist things like swaying back and forth summoning/controlling tentacles, sacrificing people, and backstabbing. Pretty good portrayal of a cultists. There are some other creatures as well and I want to single one out: a basilisk. This is a basilisk in name only, and perhaps in spirit. It crawls up walls, and then paralyzes with it’s gaze, slowing turning the person to stone after a number of rounds. This is a nice classic monster with a decent twist that allows it to be used in a first level adventure without it seeming like the DM is purposefully gimping the monster for the parties benefit. Oh, and it has a golden horn on its head. NICE! I LOVE it when a monster is seriously powerful and has an OBVIOUS treasure. Nothing quite says “push the big red button” to the party quite like that set up. “They giant is super nice … but man, did you see the size of that ruby he’s carrying?!”

The treasures are a bit hit and miss. The golden horn thing is a great example of a wonderful treasure. It’s obviously valuable and a great temptation for the party. There’s also a couple of other nice treasures, like a red glass wand with strange powers that is found in a nicely themed room. And then there’s crap like “+1 mace.” Come on guys, you can do better than that. The entire DCC experience is about being awesome and then you put in a generic +1 mace? Lame.

Anyway. Strong adventure and worth having.