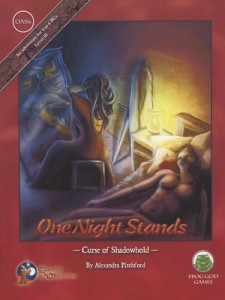 The Haunted Woods has stood for centuries on the edge of the Western Frontier, with the rough-and-tumble town of Nerimar serving as gateway to the unknown dangers of the wild. When a battered, lone elven ranger comes to town seeking adventurers willing to brave the depths of the shadowed wood where even his people refuse to go, there must be dire trouble indeed. From the ill-starred elven village of Golden Oak to the haunted halls of Shadowhold, it is up to a band of heroes to release the elves and their home from a curse that has spanned thousands of years and to finally shed the light of day on a terrible secret just as old.

This “adventure” involves a small adventure in an old ruin to kill a great evil. It’s very sparsely populated and offers very little in actual content. It does have a nice theme going on which may be worth stealing to expand on or attach to a different adventure. What that means is that the scenery around the outside has potential but the meat is not there. This feels like a Pathfinder conversion.

There’s a whole lot of lead in to the actual adventure portion. You and your name-level buddies are walking around the streets one night when you see an elf getting beat up and then the thugs, a bunch of 7th level toughs, attack you. The elf wants your help back in his village in the Haunted Woods. You fight a pack of shadow wolves that can’t be avoided and then make it to the village where the elder tells you to go find some missing elves who disappeared near the old ancient ruins. Do you know how many PC’s have died in my OSR game before making level 3? I think one guy has gone through like five so far and another guy has gone through four and I’m pretty much a softy DM. To have a bunch of 7th level thieves/toughs running around a frontier town is absurd. Follow that with: why are the party of name-level people i the town to begin with? The whole thing is set up wrong. This is what I mean by it likely being a Pathfinder conversion. This kind of nonsense is typical in 3.5/Pathfinder/4E games but the OSR side of the house is all predicated on low power levels. 8th level shopkeepers ain’t in the cards.

The ruins have fourteen room over three levels in a mostly uninteresting layout. I counted four monsters and maybe one or two traps. That doesn’t stop the excess read-aloud or DM text of course; it takes a whole lot of words to tell the players and the DM that the room is empty. The big monster at the end does, of course, have a soliloquy to give so that the designers cool backstory can be revealed. Lame. Despite the sparseness of the rooms and the extreme verbosity there are a couple of nice details that stand out. There’s great weird crystal room, a trap of course, that you could lift for your own weird dungeon. There’s also a nice description or two about shadows (the Shadow Plane plays an oblique role in the adventure backstory.) In one room the shadows play weird games around a statues feet, dancing and moving. That’s going to weird out the players and make them VERY cautious. It’s not a creature encounter or a trap but just window dressing. EXCELLENT window dressing. Ih the final boss fight there’s a mirror that can be covered up with a cloak. There’s a great description of how the cloak/cloth clings to the mirror, as if by vacuum suction. Again, that’s a great description that creatures very evocative imagery in the DMs mind … the first step in enabling the DM to do the same for the players. The monsters and treasure are nothing more than standard by the book stuff, with nothing interesting going on. The mundane treasure is terrible “$1500 gp in miscellaneous jewelry.” Gee, thanks for the effort there Alexandra … if it wouldn’t be too much trouble perhaps you could supply and adjective or adverb there, or maybe even a couple of nouns … after all THATS WHAT WERE PAYING FOR!!!!!!!!!!!!!!!!!!!

Ok, on to the nice part. As I was reading the backstory and the conclusion to the adventure I came up with something better. The published thing is all about elves, civil war, dark woods, sacrifices o a demon and strife when the sacrifices are discovered. It’s ok but could be far better. Let’s imagine a bright wood. Elves live inside of it. The wood slowly turns evil (whatever that means) but the immortal elves are too attached to their home to leave. Maybe at some level they know what is going on but the slow crawl of evil takes place over millennia and thus the elves are never really faced with a turning point. They cling to their ancient ways, mostly by habit and maybe a bit consciously, trying to force a way of life that they should no longer have. A kind of weariness pervades the setting. Unknown to all, the guy in charge is sacrificing (people, animals, whatever) to the Great Shadow in the middle in order for his people to be able to cling to their way of life. The woods have an evil and haunted reputation and either no one knows elves live there or they have an alien reputation. One eventually stumbles out of the woods in to civilization, completely out of time as if from a lost tribe, begging for help. Now THAT would be a pretty cool set up. You can thank this adventure for leading to that, since I’ve stolen liberally from it to describe the setting. 🙂