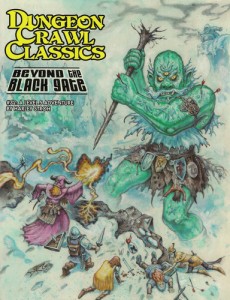 Summoned by a coven of foul witches, the adventurers are bid through the Black Gate and across the multiverse, in pursuit of the crown of the fallen Horned King. There, in the icebound gloom of Thrice-Tenth Kingdom, they must pit their wits and brawn against his dread servants. His sullen citadel looms above the darksome woods and elfin ice caves, ruling over the mystic kingdom. Do you dare to ascend the throne of bones and declare yourself master of the Wild Hunt? Whatever your answer, the land beyond the Black Gate is sure to present a grim challenge for the even the hardiest of adventurers!

This adventure has the party raiding a lair full of frost giants. The hook, while well done, is a railroad. The end of the adventure is giant battle royale, also a railroad. The thing is packed full of flavor though, and includes some great scenes as well as some great patrons, spells, etc. The overall quality of these DCC RPG adventures seems to be much higher than the told DCC line, in keeping with the goals of the DCC RPG. I think I’m giving a backhanded compliment. While the adventure has issues and is a little small, it does provide opportunities for great play, which is really the goal of any published adventure.

The players are shipwrecked. Their choice is climb the sea cliffs or journey through the sea caves below, a decision that must be made in a instant before they are swept back out to sea. They eventually end up in a coven of witches who task them with freeing their patron, The Horned King, from the thrall the Ice Giants daughter has over him so the Wild Hunt may once more run wild over the dem-iplanes! That’s the hook. It may be the firs 25% of the adventure also. It’s nice to see the hook integrated in to the adventure. Even though there’s a railroad shipwreck and there’s a railroad ‘quest’ (you get transported to the Horned Kings plane even if you slaughter the witches) it’s still REALLy well done. The entire hook section is only six encounter long but does a GREAT job of setting up a feel. I’m not even sure I have the words to describe what that feel is. A well of bones, sea caves full of torture implements and irons maidens rusted shut from the sea water killing those inside. Outside a fallen chapel the area is FULL of animals, just standing there, who part like the red sea to let the players pass to get inside. Inside is the Witch’s Sabbath. OMG! This is so bad ass! It is at times like this that I fail my readers. I have no ability to communicate the awesome descriptions that Harley uses to transfer the vibe form him and his words to the DM who has to run the thing. Long time readers know that this is one of the things I value most in an adventure. The purpose of the adventure is for the writer to communicate the vibe and feel to the DM to they can instantly grasp it and fill the details. When you read it and your mind races, filling with the imagery, then you know the designer has done a good job. Harley has done a good job with the opening, railroady or not. The whole Witches Sabbath, Horned King, Wild Hunt shit preys on your soul, dredging up everything you’ve ever read or seen related to those themes. I don’t believe in that ancestral memory crap, but it’s certainly the case that these classic tropes are powerful ones and very well presented. The classics are, in general, appealed to too often and they get old. Except when someone masterful touches them and reminds you why they are the classics. Harley does that here.

Enough gushing! On to the main adventure! Oh … wait … it’s good also. There’s an excellent opening scene with a dead giant bear, it’s head missing and a GIANT spear lodged in it. Sweet imagery! There are multiple ways in to the fortress, for clever PC’s at least. One of them has two giants bullying a third in to facing the party alone, with a fight on an icy drawbridge. There must be at least a half-dozen awesome thing set up in this one encounter. Bullying giants, icy bridge, drawbridge being raised, alarms to be raised … if your players don’t do something awesome here, or at least attempt it, then you REALLy need a new group of players … your old ones don’t know how to have fun. Inside is the usual assortment of sleeping giants, ice toads, etc, that we are familiar with from the old G series. It’s like a mash up of G1 (one of my all time favorite adventure locales) with the creatures from G2 (significantly weaker, IMO.) Mixed in with this is some foul and weird shit, like the Shrine of the White Worm. It has an egg .. with an incredibly potent yolk. This one encounter is straight out of the every Appendix N thing you have ever read where you partake of a forbidden and powerful substance. REALLY good stuff. The end of the adventure has the party meeting the Horned King, weakened on his throneIf freed from the enthrallment of the giants he rises and calls out, poetically, for the Wild Hunt to ride once more. That’s nice but it’s not the nicest part of the scene. The designer has given him about 5 hp in his current state. This just BEGS for the guy to rise up and give the mighty call to assemble the hunt! Only to then be stabbed ignominiously in the gut by a PC and immediately killed. Now THAT is bad ass adventure writing! Who the fuck is this adventure about?!! It’s about the PC’s motherfucker! not some bullshit power tripping fantasy that the DM has over their campaign world and how awesome a big of a virtual penis the DM has in creating the Horned King and the Wild Hunt. Yeah Mr DM? How about I just stab your cool ass NPC in the gut? Game Over Man! Harley did this earlier in the adventure also. When the party is confronted by the assembled masses of witches in their Sabbath, when they are charged with freeing or killing their patron the Horned King, once option is for the party to lay in to them and massacre the coven. Nice! I’ve seen over and over again how other writers deal with this shit. 27th level GISH orphan protectors, unkillable NPC’s, gimping the party and so on. None of that nonsense here! While the designer has railroaded the party in to the adventure he’s NOT dictated that the party has to be good guys or mildly accept their fate. Nice Job!

The new Harley Stroh now join the ranks of David Bowman, Matt Finch, and Gabor Lux as MUST BUYs. is there name attached? Buy it. And since only he & Finch seems to be currently producing work … that must mean he’s either #1 or #2 in the ranks of current adventure designers.

And yes, Harley, I should just hit cmd-q now.