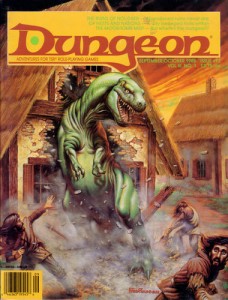 More than one thing to salvage from this issue! A decent adventure starts, an early Dungeon Dozen follows, and the then things go RAPIDLY downhill. Until a good, last, adventure appears.

The Ruins of Nol-Daer
by Howard L. McClesky
AD&D
Levels 5-8

This is that most rare of things: a good Dungeon Magazine adventure. It’s a three level abandoned/ruined keep now inhabited by a motley assortment of creatures that … and get this … all make sense together. I don’t mean they are fire giants with hell hounds or some such. There is a wide variety of creatures here and their reason for being here, working together or not, seems … realistic? There’s a page or so of bullshit introduction/background that is completely worthless but once past it you get a decently tight adventure, at least for the time it was written in. It’s got some great hooks that are short and yet integrate well in to the adventure. In fact, that’s a good summary. The adventure is full of things that are NOT throw away and fit in well. It has a certain internal logic. The ruined keep has impacted the countryside and there are a variety of places around it that have suffered. Missing livestock, a mining camp having trouble, bandits having trouble when making camp … these backgrounds, rumors, and real events all fit in very naturally. The adventure proper has a great map of a ruined keep and the encounters are full of real gamble material. A tumble down courtyard has a description that centers round the impact of it being tumble down. A monster hides in a room astral projecting … just go ahead and kill it. There’s a NICE magic ring that talks to the party and tries to get them to take it with them. Each of the encounters center around not just some bullshit victorian cataloging of the room contents but in how the players can interact with it or in how he DM can use it to interact with the players. Arrow slits might have things behind them, etc. that the DM can use to increase the players paranoia. That kind of practical advice to use in =actually running the game is what sets this apart from the vast majority of dreck.

This isn’t really an adventure, it’s more of a seed. An old wizard is retiring and moving and he’s auctioning off his stuff. The “adventure” consists of a couple of NPC descriptions and a list of 24 things being auctioned off. It’s positioned as a way for the DM to relive the party of some cash. Lame. However, if you just take the items up for auction and sprinkle them in to your campaign as treasure, replacing he lame ass shit that published adventures usually give out, then you’d have some decent treasures. Kind of like an early version of the most excellent Dozen Dozen (the best current D&D blog.) The fact that this POS takes up five pages is a tragedy, but I guess they have to differentiate themselves from a simple Dragon magazine list.

This is a short overland journey to an island with an old wizards tomb on it that is currently inhabited by bandits. Five of the adventure pages are devoted to the starting town, so it’s probably supposed to be a springboard to other adventures as well as a home base. From that standpoint it’s not terrible; there are a decent number of NPC’s running around although they don’t really interact with each other. The organization here will require a lot of note taking and rereading to allow the DM to run the village well; a typical village flaw that isn’t helped by the verbosity of this era. The overland adventure has only seven encounters. These are of varying quality. The first has a wolfwere and his six wolf buddies (concealed perfectly quietly in a crate) tricking the party and ambushing them. The lack of blood, six QUIET wolves fitting in a crate, and the absurdity of the set up ruin an otherwise classic “broken down wagon” trope. There’s a bridge ambush where a couple of turn-coat hirelings attack the party. I like the general aspect but I don’t like the way its done here. Even though there are bandits as a feature of the adventure this ambush has the hirelings in league with six lizard men. A little arbitrary … it seems like making this a rival bandit gang, hoping to join up with the main one, or ANY replacement of the lizardmen with humans, would be better. The last overland bit has a giant obelisk to be climbed to get a clue by looking through prisms. That’s a nice classic element. It’s ruined by the wizard having sprinkled clues on top to help the party … loot his tomb? Really? Ug. I hate that shit. THIS IS NOT A TEST! THE PART ARE GRAVE ROBBERS! The tomb is a tomb, and not bad by those standards. Traps, undead, etc. The bandit portion is a fake fishing village … a little far-fetched, I think. Maybe much better if it WERE a fishing village, dominated by the bandits.

There vault/ruins are well known in the area and there’s a small village at the base of the mountain the ruins are on. I really like the idea of a small out of the way village, pretty peaceful, with a local tourist attraction nearby to go visit. There’s A LOT of possibilities in that which, are, unfortunately, not taken advantage of.Hucksters, wary mothers, people with dreams, guides … a lot of lost possibilities. The adventure proper is just five or death death traps straight out of Grimtooth … but a LOT more complicated. Ah, for those halcyon years of Jr High D&D play …

Uh .. I don’t know how to describe this one. Arson, rioting, sabotage, murder … and no suspects. That’s the tagline and I guess it’s a decent description. Specularum is having trouble Murdered guards, conjured monsters, etc, have the town in chaos. There are riots in the streets and every faction in the town is tossing about accusations and at each others throats. ALL HAIL DISCORDIA! “The duke and his advisors are very concerned over the growing unrest in the city.” Yeah? No shit Sherlock. The bulk of the adventure is an investigation. Events will happen on certain days and the party will follow-up and meet people and do things until finally either figuring out who’s behind it all and/or being targeted for elimination. There are A LOT of events. There’s is a decent amount of ancillary data to help the DM runs things. A handy table for mob action, for example! There are a decent number of one-liner comments that can lead to more flavor … the underworkld meets at Black Lilly’s bar … just a sentence or two is what we get but you immediately get the picture of a kind of no-man land, or neutral zone meeting ground so the underbelly can conduct business with hated rivals, if need be. The alien nature of the invader is nicely done and, while a little forced (of look, it has exactly the magic item it needs!) I think it comes across well enough. If you read this a couple of times and photocopy and cut out and make notes and expand on NPC’s (a lot of Speak with Dead possibilities and thus a need for the dead to threaten, worry, and embellish and the DM to be prepared for that) then you’d have a decent adventure. So, basically, this is an adventure outline. A GOOD adventure outline. But like all outlines you need to do work to bring it to life.