ONS3 – The Spire of Iron and Crystal 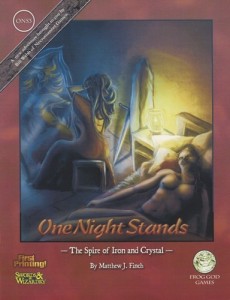 For centuries, out in the wilderness beyond civilization’s reach, there has stood an enigmatic tower known as the Spire of Iron and Crystal. It is a bizarre and ancient structure; four massive, eggshaped crystals are mounted into a twisting, ornate structure of rounded metal girders, one crystal at the top and the other three mounted lower down. Moving lights seen inside the huge crystals suggest that they are hollow and even inhabited, but no one has ever discovered the secret of how to enter them …

This is that most rare of beasts: a famous adventure that is worthy of its reputation. This is a delightful romp through a weird and wonderful setting straight out of OD&D land. It works well, supporting the core values of exploration, wonder, and “OMG! What is that?!! KILL IT WITH FIRE!”

This is a four level dungeon crawl through an environment straight out of a trippy 70’s fantasy painting: weird giant crystal eggs supported by a wrought iron infrastructure. Image one of those multi-level candle holders with a bunch of ornamentation but instead of candles the various levels hold crystal eggs. And the eggs are a couple of hundred feet in diameter. I REALLY wish the artwork here was in full colo; the black and white images inside do a great job of communicating what the place looks like but if it were color I’d go rip it out, blow it up, and put it on my living room wall. It’s THAT good. Remember, I compared it to 70’s trippy fantasy art; the highest form of compliment I can think of for a fantasy adventure. The inside of each egg is massive. The walls are short, 10′ or so, and open on the top so the players can crawl over the top. Well, except for the GIANT RAGING ELECTRICAL STORM inside, above their heads. This is open ended play at it’s best. Can you figure out a way to take advantage of the ceiling-less dungeon while protecting yourself from the giant lightning bolts raging overhead? A thousand player deaths will be built on the foundations of the zany plans they come up with to try and take advantage. That, my friends, is the definition of “Good Times, Good Times.” This utilization of the third dimension perfectly compliments what would otherwise be four moderately good maps with a decent number of loops and features.

Monster Time! Who wants to fight … Lightning Lampreys! No? How about … Slitherrats! No? Weirdly colored vermin? Fossil Skeletons? Gelatinous Triangles? Oozeanderthals? Those are some pretty sweet ass monster names! Your players are going to wetting themselves, not knowing what any of those creatures do, knowing what their attacks are or what they are vulnerable to … that is EXACTLY the kind of thing I want them to be thinking about while they in combat. 6th level? Phooey .. you could die right now Mr Cleric, right when this LIGHTNING LAMPREY ATTACHES TO YOUR EYEBALL!!!! The treasure is generally not as good. +1 swords, wands of fireball combined with some mundane gem/jewelry descriptions. There are hints of brightness, such as “chunk of gold worth 300gp” and telescoping metal rod”. In general though the treasure portion needs to be beefed up to provide the same level of wonder the rest of the adventure does. The chunk of gold is a good example. It’s got a short description yet your mind races when you hear it and you can describe it to the players in a way that seems … idk … real? Touchable? Concrete and not abstract like most treasure?

The encounters are almost all very good. Rooms that can only be accessed through crawlways, weird machines to play with and get in to trouble with. Monsters that go investigate noises in other rooms, a fun crane to play with … I could go on and on. There are 74 rooms full of fun in this place. Almost every one has something interesting in it. Not just a monster to hack down but something to play with or something interesting to investigate or something that makes combat more interesting than usual. There’s a great many NPC’s to interact with as well, so you’re not stuck just putting everything to the sword. How about some drunk academics … who are bird people? Or short friendly little aliens with speech problems? Or technicians on the run from deeper inside the egg?

This is a great adventure and one that you should own.

Oh, and I know the Frogs are saving money by using the generic ‘One Night Stands’ cover, but they really do a disservice to this one by doing that.

This entry was posted in Level 5, The Best. Bookmark the permalink.

4 Responses to ONS3 – The Spire of Iron and Crystal