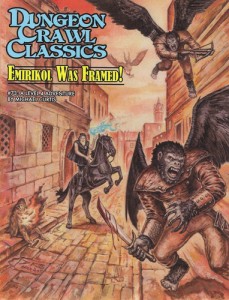 The mad wizard Emirikol is terrifying the city! Striking without reason and sending his winged apes to slaughter the populace, the famous archmage has gone too far. Now a coffer of jewels is offered to those who would dare defeat him. The ever-changing walls of his Shifting Tower are guarded by a host of diabolical traps, fiendish guardians, and unimaginable terror. Will your adventurers come out victorious…or lose their very souls in the attempt?

The story behind the famous scene in the 1E DMG. This is a series of set piece encounters in a strange wizards tower. It has more in common with the old (bad) DCC line than the new. It does retain that ‘Appendix N’ feel that the new DCC goes for and I groove on. It just takes A LOT for me to accept a linear set piece adventure. Basically, it’s just a raid on Emrikol’s tower.

This has the usual DCC awesomeness in it. The monsters, environments and magic all have that great 0E feel, from winged gorillas with crossbows to a liquid metal sword of chaos. The encounters are good ones. You go ‘up’ a level in one place by swimming up a tube of water. There is a suitably freaky golem room with weird amulets and strange players circumstances. Blueprints attack, skulls swarm over characters, and heads provide a kind of library … but in a a more differenter kind of way you’ve seen before. The trophy room has same decent weird things described, the rooms are full of interesting things, and the traps nice.

Your enjoyment of this adventure is going to hinge on how you feel about linear adventures. There is essentially only one way through the tower. You get to have twelve or so encounters in twelve or so weird ass rooms and then get in a three way fight. Is that what you want in an adventure? Great! Done Deal! I don’t know of a better way to describe this one. DCC is not D&D, I get that. It does have a lot of elements that are closer to 3E, and Curtis, despite his Stonehell fame, does seem to prefer a more linear format.

It’s a decent adventure it’s just linear set pieces and I have a hard time coming to terms with that.

Yeah, this review was lame. I had three martini’s this morning for breakfast. What do you expect?