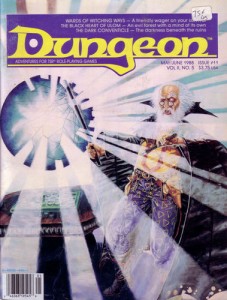 This is a raid on a major underground cult complex in order to save a kidnapped victim. If we ignore the do-gooder aspect and craptasic “save the merchants daughter” hook then you have a small infiltration/crawl that almost certainly ends in a very large scale mass combat, maybe similar to the mass combats that were possible in D2 & D3. In fact, the adventure might be summarized as a raid on the D2 temple while they were mostly gathered for a sacrifice … and you want to save the sacrifice victim. The map here is nice, with cave tunnels, worked stone, elevation changes, multiple passages/loops, same-level stairs, portcullis, statues, chasms, and tunnels blocks off by rubble that can be dug through. It sprawls over three levels. This is combined with a wandering monster table, and rules/guidelines, for the entire underground temple complex going on alert because the noise the party makes in combat and/or escaped guards. The encounters make a decent attempt, with traps, levitation holes, and guard rooms sprinkled throughout, but in general they are an overwrought and boring affair. The end of the adventure culminates with a mass combat in an underground chapel with over 200 people. There are guidelines for human wave 0-level mass combat, as well as the bajillion evil clerics in attendance. The whole things takes place in a 2-level room with a balcony, a chasm, and a lot of pews. There are no great monster/treasure items here, just the standard stuff. There are references to sewers, and the crappy hook is crappy. The encounters are generally lame. With a little work though you could turn this in to a decent high-level adventure that tests the parties ability in a non-standard way … through a HELL of a big fight at the end.

This is a one-on-one thief adventure that involve … SURPRISE! infiltrating a house. And it’s actually a test! Woo Hoo! Let the suckatude begin! The problem with this type of adventure is that thief skills suck and once they flub a roll its hard to make the case that the entire house doesn’t show up to kill your ass. This is supposed to be a caper, but many of the encounters involve forced combats, which defeat the purpose of the adventure. It’s yet another piss poor attempt to force a certain play style. I’m sure someone could a decent one of these, but this is not the one.

There’s an evil forest nearby and you’re hired by an archdruid to go fix it. You need to pour a potion on the magic tree in the center to cure the corruption. The major differentiator in this adventure is the evil wood ‘waking up.’ The more the players screw with the forest then the more awake the forest is, eventually leading to a VERY bad outcome as all of the trees animate and annihilate the party. There’s a pretty giant wandering list that’s influenced by how awake the forest is, as well as a short series of programmed encounters if the party takes the direct route up the river to the heart of the place. The basic format is: you have to get out of the boat because of some obstacle, something in the forest attacks. A wise party avoids the combat and moves on. The final encounter is with a couple of treants, and then the adventure is over. The Awakening part is cute, but I’m not sure the forest is large enough to get full use out of it. There is a Monster Statistics table at the end that serves as a kind of reference for the adventure. I wish every adventure did this.

This is a tournament module, with scoring. It resolves around a four-level keep/castle with about fifty rooms in it. The party has to make their through it to the end. The two major occupants are betting on the parties outcome and if they’ll make it, with the adventure eventually ending with the party fighting both of them. It’s not terrible for a tournament adventure: it’s self-contained and there’s a decent amount of variety in the encounters as well as options available to the players in navigating the keep. There are some pre-planned/programmed/event encounters in addition to the usual location-based encounters. It’s a tournament module so the forced ‘bet’ hook can be ignored. Otherwise, it’s a decent tournament adventure. There’s no railroad and the thing needs a serious edit to cut it down to size so groups of DM’s can run it, but that’s generally the case with ALL Dungeon adventures. If that kind of work were put in to this then you’d have a decent adventure for a con that you can score.