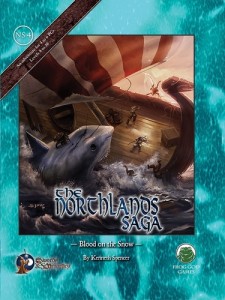 The country of Estenfird is in flames. Wild men and beasts have descended in hordes from the mountains bringing fire and destruction into the forested lands below. The hirths of the North have been called forth to defense, but with the heavy snows of winter delaying travel will their arrival be in time to save this frontier realm? Even the heroic Protector of Estenfird, Hengrid Donarsdottir, is hard pressed and has called upon all heroes to come to their aid. It is time to don arms and armor and brave the winter’s wrath to come to the defense of Estenfird in its hour of need.

This is a great high-level adventure in the frozen north, heavily themed for vikings. It mostly avoids the high-level traps that many high-level adventures fall in to and provides some great text that can really help you get in to the mood. It’s not the most original adventure ever made but by integrating the viking theme it comes off as a good attempt to take old ideas and change the window dressing to make them fresh again.

I don’t know why but I really get off on frontier adventures. No the usual “Keep on the Boringlands” stuff but rather a kind of “Settlers in the Pacific Northwest” or “Viking homesteaders” type of adventure. I liked the Death in the Treklant/I series from the Trolls and I like this one also. They invariably involve viking-type people, LARGE combats, and a free form type of play. Two out of those three points also work well in high-level adventures. This particular adventure has a very 13th Warrior feel to it. The local Beast Cult is raiding outlying villages, burning towns, etc … a big mass uprising. The players set forth to gather and rally the Hirthmenn as they make their way to the main town. There they find besieged, get in, participate in the defense, and then infiltrate an enemy camp and rescue someone. Like I said, generally pretty standard stuff. The lower-tech/frontier feel to this adventure feels lot more ‘right’ for this type of adventure though and ‘Thing’ meetings, the Hirthmenn, and even the beast cult all seem to work much better in this then analogous elements do in Generic Fantasy/Boringlands type adventures.

There’s a decent mix of encounters scattered throughout the adventure. These range from some good wandering encounters with nice descriptions that fit the theme to a couple of pre-programmed encounters. For example, the party can encounter The White Stag in a herd, who can lead them past an ambush point. That ambush involves a mixed group of enemies rolling a big log down a hill at the party and then attacking. There’s a big part when the party tries to sneak in to the beseiged town through scattered enemy camps and then a bunch of little mini-vignettes where the party faces various situations during the siege. It ends up with the an attack/raid on an enemy “temple” where they are getting ready to do a sacrifice. All of these encounters have a decent Flavor to Text ratio. Things tend to be described briefly and with a lot of flavor to them. It really gets across a kind of norse/frontier vibe and gives me enough to work with to expand on it, given my cursory background of norse knowledge. The town encounters have things like women guarding children, with the women getting slaughtered when the party rolls up, or the siege of an alehouse, or what happens in the various homes that are sieged. They are very nice.

The problems with the adventure are interesting. It points out in advance that the characters can probably teleport, fly, or do something else to get the town fast. What this does is cut off one portion of the adventure: gathering the Hirthmenn. It makes defending the town all the harder, but you can do it. See, that’s the way to write a nice high-level adventure. The stakes are higher (town under siege) and the while you can use magic to blast your way through the adventure, the outcomes of such may make things harder for you than you’d otherwise find. It ignores the fact of why the name-level pc’s are willing to go do the job in the first place. It also has a forced kidnapping during the siege to set up the adventure endgame. That’s lame. The siege of the town is a little bit of a let-down also, or at least he consequences are. The battles in the town are modified by the number of Hirthmenn the party brings with them. It you brought a lot of dudes then the party faces fewer foes and those foes have been weakened by having fewer HP. It doesn’t really feel though like the Hirthmenn make that big of a difference to the town proper, or that the parties actions make that big of a difference to the towns outcome. They’ll save a group of orphans here or there, but in general there’s no guidelines on outcomes based on the quantity of Hirthmenn and the parties actions. That makes it feel A LOT like window dressing. Nice window dressing, but still window dressing.

I did like the ADVENTURE outcome though. If the PC’s fail then things get REALLY bad in the north. Thor dies and all hell breaks loose in heaven and earth. The description is more than enough to give a decent DM ideas for AGES of follow-ups. If the PC’s save the victim at the end then one night they get to party in Thors longhouse with the man himself, and get some nice mead, venison, and magic to go along with it. That’s a pretty sweet little flavor-text portion for a party! I’m serious man; I would totally dig that outcome if I were playing this adventure. It acknowledges that the treasure int he adventure is light and gives an alternate reward. Nicely Done!

This entry was posted in Level 8, Reviews, The Best. Bookmark the permalink.