Tower of the Scarlet Wizard 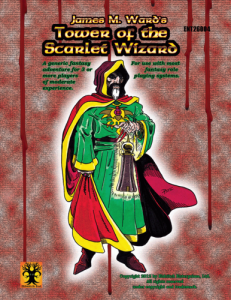 A mysterious and magical message literally drops into your lap from the very air. Unsettled by the experience, you nevertheless open it. It seems that there is a tower at the center of a nearby town, packed with magical items and untold riches… and it seems YOU have inherited this tower! Well… almost. You are one of several cousins vying for ownership of this magnificent edifice. The task seems simple: convince the servants of the tower that you are the rightful owner. Once all of the tower’s servants have sworn fealty, the tower, and its riches, are yours. It sounds too good to be true… So it probably is.

This is a fun little romp through a weird wizards tower chock full of treasure, magic, and allies … and the tower proper could serve as a base of operations. It’s stuffed with gameable non-standard items and encounters, but could use a little more description in some of the items. One of the best Elder Ent products I can recall.

An old wizard dies and leaves a character his tower … if he can get there first and claim it before one his cousins does. Jim Ward does something amazing: he gets to the point. There’s a VERY brief introduction, about a half page of introduction, and a page handout of the wizards letter to the character. That’s it. I’m amazed. Not to sound too cynical, but I’m been slogging through A LOT of introductory text lately, a problem that plagues many publishers and adventures, and EE is not excluded from that list. Jim however dispenses with that nonsense. He provides a pretty terse introduction, in the large font I find so annoying but that my old eyes enjoy, and then get down to business. And what business!! This is an adventure firmly rooted in the weird & whimsical world of pre-standardized D&D. Ultimately the point of adventure is for the character to gain his inheritance, the tower, which can be used as a pretty spiffy base. And the designer doesn’t gimp the character AT ALL. This place is EXACTLY what the players want when they hear that they are getting a wizards tower. The whole place reeks of the fantastic, with a touch of some kind of 20’s sandlot play.

Attacking the tower from the outside creates large batches of cut flowers, which the locals gather and sell. Kids sit around in a vacant lot and laugh as the characters try to get past the front door. Inside you’ll find a trophy room with lots of monsters heads … including a medusa head in a bag that still works! The stairs scream out warnings as things tread upon them. There’s rooms full of magic spell components. One room has a wall FULL of magic wands … THAT ALL WORK! There’s a zombie parrot that knows things but drinks blood. There’s are brass bees that attack people trying to use magic. There are clockwork creatures all over the place … but almost none of them are immediately hostile. There’s a clumsy clockwork bull that follows the characters around if they activate it … for better or for worse.

The place is FULL of treasure, most of it is just generically described well described although there are hints here and there:gold dust or uncut jewels, for example. I prefer a little more description of my flatware sets. There are a decent number of creatures in the tower but most are not hostile, and that may be the most serious problem with the adventure. That’s not too serious though. In fact, I think this would be a FINE adventure for when the wizard finally gets to the level where he gets his tower. You pull this thing out and *BAM* instant wizard base that also provides some weirdness and exploration to it. It would be really cool to see similar adventures for the other classes also.

I like this. Jim does a good job mixing the classics with the fantastic. A gem on a pedestal releases poison gas. Portions of the tower may never be found, and the treasures remaining hidden for a long while. He gives just enough hints in the very terse backstory to construct the village and its life around the tower. I like that aspect a lot. He doesn’t go on and on. He just mentions something in passing and the core concept is communicated instantly with more than enough flavor to allow a DM to add the additional flavor needed to expand it.

This is worth keeping.