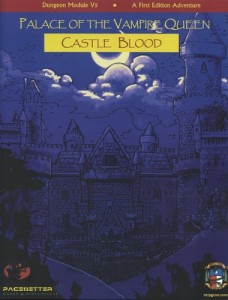 The story of the Vampire Queen is as enigmatic as the woman herself. Her palace, the dungeons beneath a ruined castle beckon those who would seek to end her reign of terror. But before the dungeons can be entered, the Castle Blood must be cleansed. Palace of the Vampire Queen: Castle Blood is an adventure for first level characters that are destined to meet the most powerful vampire under the crescent moon.

This is a kind of prequel to Palace of the Vampire queen, taking place in the ruined castle above the dungeons. It’s got a great map and some good encounters and personalities. The designer has really stepped up his game with this one and it hits a lot of high points.

Palace of the Vampire Queen is full of dungeons. This adventure takes place in the ruined castle ABOVE the dungeons. This is a little bit of story-based introduction, a page or so, but then the goodness starts with some great hooks. Rather than the entire adventure being focused around a single goal instead it’s been laid out more like a location. There are certain things at the location that could get the party involved. Someone could pay them to burn down/destroy The Black Arch which is found inside the castle. Or maybe they are involved as a rescue mission to save the daughter of a merchant which is held captive in the castle. From the very beginning then you get the feel that this is just a place that exists outside of the characters involvement in it, and that carries over in to many of the encounters. I think that gives the adventure a uch more natural feel and its therefore much easier for the players to suspend disbelief.

The map for the castle is kind of cool. I’m not sure if its a creation of the designer or if he’s lifted it from a historical reference, but it’s nifty. It looks like the layout of a real castle. It’s on a hill with a drawbridge over a ravine and a barbican that backs up to a courtyard with the castle behind it. Portions of the castle (what’s the difference between a castle and a keep?) are ruined and its three-ish levels high, with ruined rooftops, flat rooftops, collapsed towers and room sections. It’s a pretty nice environment to have an adventure in. The 3d/vertical nature of the environment could have been emphasized more, maybe with additional ways between levels, or weakened floors or specifically calling out a summary of various level entrances. It IS a really nice map though.

Encounters are much more interesting than many OSR products, at least with respect to monster interactions. These guys are not just hanging around waiting to be killed and they usually have some indication of being willing to interact. There are some kobolds at the barbican gates that can be paid to extend some planks over so the party can cross. There’s a group of evil dwarves in the barbican that are smiths/armorers and while its stated they ambush there’s also enough information to build something more social out of it. There are orcs, kobolds, and gnolls in the castle proper that all have a reason for being there, a set of motivations, and potentially a reason to work with the party. I think this is MUCH more interesting than a bare room description or a simple “they are guards and attack!” description. Yeah, maybe they DO just attack, but at least this way there are other options as well. There’s a lot of sparseness to the rooms; the castle is not packed full of enemies. There’s a thing or two to interact with and some unique magic items scattered in with the normal book items. There’s also an encounter with The Vampire Queen herself. Taken by itself it seems out of place. But if you think of this as the prequel to the Palace of the Vampire Queen then its a great introduction and foreshadowing of the main villain, as are the various npc/monster social encounters. They can all be used to build up the Vampier Queen in the players minds to something more than ‘Just Another Monster’. I love that.

The map design seems much more real and taken alongside the more ‘social’ encounters with monsters, or at least the possibility thereof, it really hits on things I like seeing. I could quibble with more but it would be backseat designing.