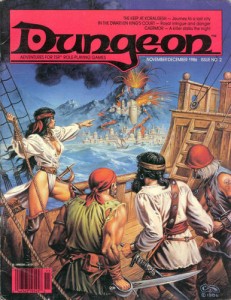 This seems to be a stronger issue than #1, although half of the adventures are … unusual. It’s important to remember that Dungeon Magazine is still in 1e land, 2e not having appeared yet. A cursory search shows that the only other set of review of Dungeon magazine are on rpg.net, and the poster only made it to issue #17 in two years of writing. My views seem to vary significantly from his. The Dungeon Index, a summary of all adventures, appears to currently be down.

This is an adventure through a Titan’s dream. It’s a weird and confused, or maybe disjointed?, affair. Of all the dream adventures I’ve seen it tends to be one of the better ones. Which still means it’s total bullshit, but it tries harder than the others. An incredibly long and useless backstory and introduction lays out the situation: there are three dreams, each with five acts in them. The players randomly wander about from act to act and dream to dream in no particular order until they do the right thing in an act. That act is then unavailable. Once they complete everything then the titan wakes up, they are released, and they can proceed with the bullshit hook from the backstory.

I’m being a bit too hard on the backstory. The titan here is a classical greek titan sitting in a classic greek temple. He’s an oracle and the party is sent to him to solve a dilemma for The King. The Titan eventually answers in a riddle. That’s actually a pretty appealing scenario once you yank out all of the specifics. Yanking this adventure and providing the titan as an oracle for the party to go visit to find out how to do X could be pretty interesting. It’s the kind of classic adventure trope that I can really get in to.

The dreaming … not so much. Same old issues … no real threat and no real consequences. Fake XP awards and fake treasures. Yeah, sure, the party can die. Dream adventures always do that. But somehow these always seem like ‘kp duty’ adventures; they feel like punishment and no one cares about the outcomes.

Each act has a brief description, two paragraphs or so (Yeah! Terse!) and then some suggested tasks that the party can complete to ‘win’ the act. Generally if the party does some kind of good or heroic act then they pass and if they don’t then they get to repeat the act at some later stage. For example. Merchant Bob didn’t sacrifice to Poseidon so he stole Bobs fiancé. Act 1 has the party arriving outside Bobs house in the midst of a crowd just after Bob has learned the news. The party can pray to a god to intercede on Bobs behalf, volunteer to go on a quest to recover his fiancé, or restore order in the somewhat rowdy crowd. All of those are examples of a pass condition. Very classical. Most of the potential combat situations have a couple of suggested tasks that don’t involve combat. There’s no magic items available in the adventure, they all dissolve when you return from the dream, but some coinage, 2,000-5,000 per character is suggested as being allowed to bring out. That’s not too bad at the lower end of the adventure scale (level 5) but at the upper end (9) it may be more worthwhile to kill the titan and loot his ass.

As an early type of story game driven by the D&D engine it’s kind of interesting, as is it’s reliance on the Greek Classics. Maybe a good Mazes & Minotaurs adventure? I want to like this adventure but it may be that my ‘hate dream adventures’ conditioning is too strong.

WTF is up with the lack of treasure/XP in these things?

The characters get to investigate some thefts in the court of a dwarf King. Let me get this out of the way: mysteries don’t work in D&D, or most RPG’s. The players have access to just too many ways to get information. At this level we have Augury, Detect Charm, Know Alignment, Speak with Animals and maybe Speak with Dead and Locate Object. And that’s just the clerics list. Druids and Wizards will have their own allotment. The only way past this problem is with a bizarre assortment of customer tailored magic items just to fuck with the players and deny them the powers their characters have earned. So, the adventure sucks.

A decent attempt is made at a character-driven story by giving some decent details of a dozen or so key NPC’s, their personalities and how they act and react. It’s like a Poirot mystery: everyone has something to hide. This is ten ruined by providing overly long and uselessly detailed room descriptions in order that they make up the majority of the page count. It would have been REALLY helpful to have had all of the NPC’s detailed on one summary page for the DM to refer to during play. Of course, detecting one secret door virtually ends the adventure before is starts, through the use of a ghost and his ring of wishes. The hook is lame: the characters get visions telling them to go the dwarf kingdom. How about you don’t even make an effort next time?

There’s a lot of stuff to explore with the NPC’s and with the environment/rooms (incriminating evidence and red herrings) and if you put some hard work in to prep’ing it you could get a decent murder mystery to run. But then the party will ruin it in 5 minutes by casting a spell.

A devil worshipper cult in a remote village. This is a pretty tight little adventure. It’s got a good low-magic/peasants feel to it and a couple of strong NPC’s. It’s got the “too many words” problem and could use a lot more village color: more locales and NPC’s to interact with. Some local ‘petty evil’ types have summoned a devil … and it worked! They are now in over their heads and don’t realize it. The villagers blame someone else for their troubles (ripper apart sheep, etc), and can be stirred by the evil doers. There’s a decent little ‘insular mob’ vibe that goes well with the ‘inbred morons’ vibe. It really conveys the spirit of some of those elements from the Lovecraft stories. There’s another group of adventurers in the village but almost nothing is done with them. There’s an attempt at giving them personality but not much in the way of a timeline for them. If you fleshed this out a bit while summarizing a lot of the content in the adventure then it would make a decent low-level game.

This is a decently-sized four-level dungeon. It’s a BASIC adventure and so we have to sit through the usual condescending crap, like “don’t tell players they just found a +1 sword” and so on. Only a page and a half of backstory/introduction, only half of which is read-aloud, so this one wins the “briefest introduction” award. There’s a slightly generic feel to this combined with some random specific content. It reminds me a lot of the Palace of the Silver Princess or Castle Amber or maybe even the Lost City … the way their content was bit generic and then they would have something specific. Really a kind of disconnected set of encounters, I guess.

There’s a very nice rumor table included as well as some creepy-ish wilderness wandering monster entries in order to highten the tension prior to reaching the dungeon. The first level is my favorite: caves with lava pits, fissures, and a couple of puzzle type rooms. The second level has a totally generic looking map (hints of symmetry. Ug!), with levels three and four having more interesting “keep interior” maps.

It’s quite an extensive adventure with a decent number of things to discover. It’s just the generic magic items, generic monsters, generic rooms, etc that I’m having a problem with. I’m probably being too hard on this … it’s not weird and I like weird & unique but it DOES have that same strong vibe that Silver Princess, Castle Amber, and Lost City have. Those are not terrible adventures (as I recall them, anyway …) and neither is this one. It just needs a lot of work, IMHO, to beef up the creatures and magic items.