Curse of the Weaver Queen 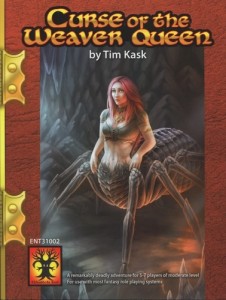 The lunar goddess Arianhrod presides over the great wheel of life. But centuries ago, some saw the Wheel as a Web: a spider’s web. And so began the Cult, and so it has festered, hidden, malignant… waiting. Now they come scuttling out of the dunes at night, silent and deadly. Only a very lucky few have survived the ravaging horde. The bugs. The huge spiders. The Gatherers, taking what is man’s and returning to their lair. That area of the dunes is strange. You’ll see. You can find it easily. And with luck, you may live to tell the tale.

This is an adventure in an old temple dedicated to a spider goddess. This may be the worst organized adventure I’ve ever seen. Somewhere buried in the mess are a series of fine little things for the party to figure out and play with, as well as unique magic items. It would be a decent adventure if Chris & Frank, the supposed editors, had had the balls to tell Kask he was fucking the thing up.

Ten pages. It takes the designer ten pages to get to room one of the adventure. Of those about 25% of one page describes the temple exterior. About 50% of one page describes a new way to adjudicate swarm attacks. The rest of it is all garbage background, and introductions, and bullshit nonsense, and grognard nonsense and, this being an EE adventure, a page describing their generic adventure format. Of this entire pile of words there may be two interesting things of note. First, swarms of vermin erupt from the temple from time to time. Nice imagery. Secondly, the overly long backstory has a nice little section about recent events: a sheep disappears, then a cow, then a couple of infants etc. Instead of taking a page it could have been boiled down to little more than that, but then you wouldn’t get as much value, would you? I don’t know why designers insist on doing this kind of stuff. Why do they feel the need to explain EVERY SINGLE THING in the adventure. Great, it’s a spider cult temple. Wonderful. I described in six of seven words. You took a couple of pages. Mine is as good as yours because you are not introducing ANYTHING new or interesting in your description.

There seems to be some weird fetish with monster stats in the adventure. They are everywhere. In the introduction text. Inline with the room descriptions. Included in the bestiary in the back. Included in the appendix in the back. Is it padding or just bad organization? I have NO idea. Most of it just looks like a copy/paste job. While I’m on the topic of “crappy layout and organization” let me mention a couple of other things. Recall, I don’t usually give a shit about this kind of stuff; it has to be REALLY bad for me to comment. It’s really bad. Besides the monster stats pasted in to every nook and cranny there’s also this weird thing the designer does where he splits up important information. He puts critical information in the bestiary, or the appendix, or the introductions, or in a different room. This is crazy maddening. After reading the adventure three times I STILL can’t figure out where the hell the books, mentioned in an appendix, are or what role they play in the adventure. The room encounters themselves are some stream of consciousness thing where the designer inter-spreads key information in to the room description in a kind of parenthetical way. It’s also most like he dictated this in to a tape recorder and then types it up later without organizing it … and then his two buddies, the editors, didn’t tell him what a mess it was. I get trying new things. I do. I appreciate it. This doesn’t work and your editors should have told you as much. If they did, then you should have listened to them. The whole mess is then further obfuscated by the use of the Eldritch Enterprises generic stats for things. I don’t know if they are still terrified of T$S legal, or are bound by contracts, or are under the impression that someone NOT playing D&D will buy this … but it sucks. It sucks hard. It ESPECIALLY sucks hard given the mess of the rest of the adventure. He makes things even MORE obfuscated by refusing to describe some of the treasure in straight-up terms. “It’s worth as much as a whore for two nights or a wagonload of turnips.” No, that would be interesingt. He actually says “the crown is worth as much as a set of plate armor” or some such thing. Jesus man, just put a price on it. Especially since you’re not even consistent about it in your own adventure: there’s coinage all over the place.

The spider temple has three levels. It does not have the most interesting layout but it does have, potentially, a layout which will encourage returning to various parts of the temple later in the adventure. There may be rooms that the party bypasses early on and then figures out they need to return to, or figures out what to do in a room. This is a good thing. The whole layout works together to provide a kind of mini-puzzle for the party to figure out. Or not. You can also just the hack the place and kill it with fire. This sort of double engagement is interesting to see and makes me wish the adventure was more coherent. Going to the scriptorium can provide clues to other rooms and together those rooms can provide more background about what’s going on. That’s neat and rewards players who are in to that kind of stuff. Or you can just dump in some boil and the hack the boss down.

I want to call out two encounters in particular. We’ll cal them Agony and Ecstasy, since I’m in a Hellblazer mood. Agony is a lich astride a devil horse in a room that the players are bound to enter. He’s level 22 and kills the party, since they will be MUCH lower level. If the party does manage to kill him then his magic bullshit crown and magic bullshit mace and magic bullshit robes, all of which he uses to great effect in the combat, shatter. So, fuck the party over and then gimp them out of the treasure. Nice job Kask It comes out of nowhere and doesn’t fit the rest of the temple at all. It’s out of place and weird, and not weird in a good “OD&D” way. Ecstasy is the first first set of encounters in the adventure. A giant talking stone face with gemstones in its forehead and weird little demon create that is some combination of fruit bat and lizard. Those are some pretty cool and weird encounters. And that time I DO mean weird in an OD&D way, which is a very good thing.

The upper level of the temple is by far the most interesting, with the lower levels being mostly just vermin rooms. Kind of nice from a creepy standpoint but less so from the “weird D&D” standpoint. The boss is insane and either attacks or talks to the party, and switches it up a lot. There’s a way to win WITHOUT killing it, but it’s made hard by the whole “randomly attacks people” thing and the fact that there’s really no reward for NOT killing it. Oh Well … *HACK*.

The monsters and treasure range from decent to good. Most of the monsters are unique to this adventure and strange enough to give you nightmares … I’m remembering that scene with the bugs in the newer King Kong movies. The magical treasure is also unique. Amulets that make spiders ignore you. Staves that shoot fire. Weird magic ropes … it’s good stuff.

There might be a decent adventure hiding in here, in the upper C, lower B range, but you have to work to find it.