Night of the Black Swords 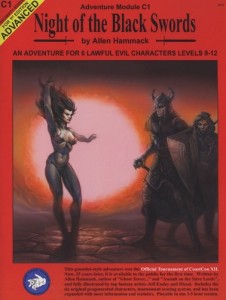 This is a tournament-style 10 encounter adventure for evil characters through the depths of hell. It’s ok for what it is but has limited use outside of its tournament context.

The evil party belongs to an evil secret society known as The Black Swords. They get tasked by a shadowy figure to go to hell and rescue some evil guy who usually pretends to be good but is in danger of being exposed as evil by baddies who are positioning themselves to take down the shadowy figures boss. IE: It’s a plot by one faction of arch-devils to weaken a different faction of arch-devils. That’s more of a pretext than a hook though. You’re going on this adventure because you’re at a con and it’s a tournament. The evil aspects of the party are not really emphasized other than one brief encounter with a seductress, and I guess even that is handled in a tasteful fashion. Being evil is just a reason to rescue some other evil guy and not be attacked by a subset of hells denizens.

There are ten encounters in hell for the party to navigate their way through. Some are combat and others are role-play encounters and more typical tournament “that’s not our goal, ignore it” encounters. While I’m not a fan of the linear tournament style, I did think that the encounters were interesting enough, at least interesting enough to steal some ideas from. In particular there’s the good encounter with some Rakshasas who are pretending to be someone else. It’s nice to see a classic monster being presented in a classic fashion: trickster spirits tricking people. It reinforces a great way to present these monsters in your own game. The actual details of the encounter are not that interesting, just the fact that the creatures are using their ESP and shape-change ability to lure the party pretending to be someone else. It’s a nice bit.

Along a similar vein there are devil gate guards that the party need to get by. It’s the usual BS city guards at the gate encounter that I use all the time, except this one is in hell and the guards are devils. I was disappointed to not have the ‘hell’ aspects played up more. In fact, that could be a common complaint of the entire module: it doesn’t feel particularly like hell. Then again I guess there’s a line to walk before crossing over in to the prurient. The only thing remotely hell-like is an arch-devils girlfriend putting the moves on one of the party members … and the party getting points for going for it.

The end of the adventure has a fight with an arch-devil in his palace. It’s also possible to avoid most of the fight, I suspect. Most of the adventure is just figuring out how to avoid the encounter in front of you by using your high-level abilities and magic items. That’s not bad, but it’s not particularly interesting in terms of ‘content I am paying for’ either. There’s not much new and interesting in this adventure, if anything at all. STandard magic items, standard monsters, flavorless but verbose encounters …

Theres not much to recommend here, unless you just want a straight-forward tournament module.

1 Response to Night of the Black Swords