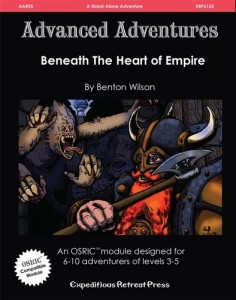 by Benton Wilson
Expeditious Retreat Press
OSRIC
Levels 3-5 (or 1-3, the cover and fist page differ. I suspect 1-3)
The capital of the Venirian Empire has been re-located back to Venir, and a thriving city has been built above the swallowed ruins of the old city. Various connections to the old city can be found in the sewers, cellars, and other underground portions of the rebuilt city of Venir, and adventurers frequently plumb these depths in search of the secrets and treasures of the empire’s glory days. What lurks beneath the Heart of Empire?

Sewers. There’s an attempt at flavor but its sabotaged by a cramped map and the lack of inspiring text. And it’s in the sewers. Has there EVER been a good adventure that took place in the sewers? Ultimately I think the product is confused about it’s trying to be. It’s presented in typical dungeoncrawl format but would be better served, I think, formatted as a kind of setting book for the sewers, or as a more open-ended sort of adventure.

This adventure is quite terse, at only eight pages long. It details a section of sewer under a city as well as a section of the old ruined city that lies under the sewers. There end up being four distinct areas of exploration, each with a hook associated with it. There’s a kidnapper/slaver, a renegade necromancer, a kobold lair, and the old ruin of a small gladiator arena. Each of these has some sort of hook associated with it: kobolds have been spotted, a contract on the necromancer, someones relative has been captured, etc. This leads to the map problem: all of these guys lair within 200 feet of each other, and usually much closer. The map is small. Quite small; at about a quarter of one page. This leaves the whole thing feeling strangely disconnected from each other. A larger complex map could have been much more interesting. Then the players have a reason to talk to the kobolds, or make an alliance with the slaver, or something else that would turn this adventure away from a single lame crawl to a more involved focus point and place of interest in their travels. By opening it up and providing a little more motivation for the groups then you’d have a kind of faction play available. This could lead to continuing relations with the various groups and a real opening up of the play in the undercity. Instead this looks like a typical crawl.

It tries. There’s thugs in the sewers, and skeletons risen up from the ruins of the old city. There’s disgraced gladiators trying to regain their glory wandering around and there are escaped slaves begging for help. There’s a monkey-ghoul and a weird undead guy with flaming blue hands and a door decorated with an animated skeleton. There are peasants set up as watchmen by the city and weird skeleton with strange powers. But these are the exceptions. The 47 or so encounters in the sewers tend to be of the Boring Room with Boring Contents variety. The rooms have very little going on in them and what there is described in a mundane and uninspiring way. What I’m looking for in a room description is something short but evocative that can communicate the room to me and let fill in the details myself. I’m not looking for an exhaustive list of the rooms contents. If it doesn’t inspire then it should generally be cut out. The kobold lair is a good example of this. There are eight or nine rooms taking up a page or so that describe the kobold lair/rooms. Almost none of the text adds anything to the room title. “Half-built tunnel” is fairly good, as is “Kobold Chokepoint” The additional text, a paragraph or so, does little to add to the rooms beyond the description that I could not. Inspire or Edit! In contrast the treasure is not bad. “a gold comb”. “an amulet with a glass bead on the end.” Not quite the level of detail I appreciate but at least an attempt was made. What if the comb had a dolphin on one end in a lewd pose and the amulet was black and white painted silver in a kind of ‘locket’ format with the bead inside? The magic items are of the “+1 sword” variety, and this do nothing to add to the flavor. Listen kids, if it’s in the core books then why am I paying you for the trouble of copying the text back to me?

Expanded on to a larger map with more motivations for the various groups and a longer adventure could turn this in to an interesting adventure. But by that time you might as well rewrite the entire thing. The Jakallen Underworld still does this sort of thing best.

2 Responses to AA25 – The Heart of Empire