DC-1 The Outpost on the Edge of the Far Reaches 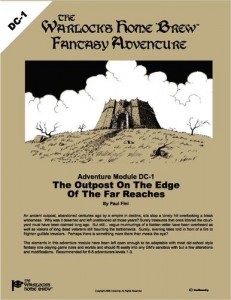 An ancient outpost, abandoned centuries ago by a empire in decline, sits atop a lonely hill overlooking a bleak wilderness. Why was it deserted and left unattended all those years? Surely treasures that once littered the courtyard must have been claimed long ago. But still… vague murmurings of a hidden cellar have been overheard as well as visions of long dead veterans still haunting the battlements. Surely tales told in the evening in front of a fire to frighten gullible travelers. Perhaps there is something more here than meets the eye?

This is a small four level dungeon with around seventy rooms in it. It uses a lot of fairly common tropes: orcs, goblins, kobold slaves, a forgotten tomb, etc. There is not much in the way of originality. It’s large enough to get your EXPLORE on and doesn’t offend enough to make me loathe it. It reminds me a lot of a ‘normal’ adventure.

I’m having a hard time with this one. It’s easy for me to rant about things I loathe, like the OCD crowd on BGG. It’s easy for me to be incoherent with excitement and praise when I find something I like. The middle is where I have a hard time. This thing lies in the middle. Since most adventures seem to suck it also means that this adventure is better than most. “Sucks less than most” is not exactly praise. Put another way, I’d be happy if this level of quality was the baseline by which adventures were measured, instead of 90% of the stock being crappy.

The two pages of introduction can mostly be skipped. The background is short but there’s a decent amount of notes and introduction type material. Perhaps the only really good advice is “the ruin was built by a foreign power. Consistently describe its features as being foreign feeling.” THe four levels of the ruin consist of the ground level ruins, the basement of the ruins, the dungeon below the basement, and the “Caves of Peril and Tomb of the Forgotten.” Man, that’s a level name right out of Holmes/Moldvay! The surface ruins are generally nothing special. They essentially serve as a warm-up and teaser for the lower levels. Some of it is done well and some of it isn’t. There’s a rooftop for the group to climb up on and look down in to things. That’s good. The concept of varying elevations and an environment that allows players to better utilize their surroundings, like climbing up, is something more adventures should allow for. The wandering monsters also contribute to the kind of build-up of tension on this level. Wolves howling in the distance, strange sounds, ominous ravens … this, combined with the “mundane” nature of the well-looted ground level is going to leave the party guessing what is actually going on in the adventure. Some clues in the form of weakened ladders, and perhaps some pets left behind, should also raise tension a decent amount. SOMETHING is present, but the group won’t really know what. Three trapdoors to the roof, it’s open nature, and three stairs down to the basement allow for a non-typical number of ways between levels.

Time for the exciting reveal in the basement! Well, not quite. The basement begins to introduce more creatures, notably undead, with more clues that something larger is going on here. Finally the players will reach the Lower Level and things fall apart. The map here is large, relatively interesting in its non-linear nature, and is stuffed with orcs, goblins, kobolds, and ogres. Room after room. For the most part the rooms are not interesting at all. Their descriptions tend to be longish and end up amounting to “nothing interesting except a couple of humanoids.” For example, the toilets have an orc in them, but it takes a decently sized paragraph to explain that. This is not an uncommon example but rather the norm. For a fully developed humanoid lair like this I like to see an Order of Battle; a list of which monsters will respond to alarms and how they react, etc. This keeps me from having to dig through room after room looking for numbers, stats, etc. While it’s suggested the humanoids react realistically there’s nothing more given. This means more prep time for me and, after all, I’m getting the adventure so I don’t have to worry about prep time. The Caves of Peril and Tomb of the Forgotten are a major let down. Just four or five cave rooms and two tomb rooms. Shriekers, pools of water, grey ooze, wights … nothing really special or interesting here. The treasure is mostly monetary with a few tapestries and the like to pilfer. Enough to keep it a bit interesting. The magical loot is boring book items with not much detail, description or flavor behind them. The only real exception if a Cleaver of Culinary Arts wielded by an ogre chef.

I suspect this adventure plays fine. It you wanted a vanilla adventure and were allergic to D&D’s weirder (and, IMO, fun) parts then this would be a good choice for you.